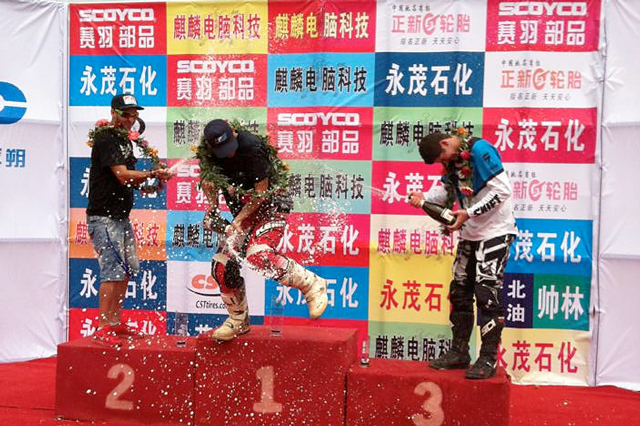 Riley Graham has landed on the podium at the annual China International Motocross Invitational held at the Pinglu International Circuit over the weekend.

The rider originally hailing from South Australia, got a last minute call up to the event after good friend Nick Murray had to pass up on the opportunity due to an injury.

Graham took full advantage of the opportunity and after quickly adapting back to racing a 250F machine, was able top round out the the weekend with third place overall.

Though taller and weighing a little more than the average small bore rider, Graham was able to launch off the line with some great speed securing a holeshot and second place start before finishing 3-3 for the event.

"I finished third overall in China and I was pretty happy with that," Graham stated. "I had a second place start and score a holeshot which was sweet for a 85kg plus guy on a stock Honda! Most of the riders in the class were at least 10kg lighter but it was so much fun," he added.

"I dropped back to third in both races to go 3-3, finishing third behind winner, Alexis Gaudree from France and Deny Phillippaerts, brother of Dave Phillippaerts."

"I have to thank Ram Racing Trailers, Outlaw Coatings and Conveyors and Flinders Motorcycles for their support and helping me out and also CMSA for the opportunity to race the event in China. 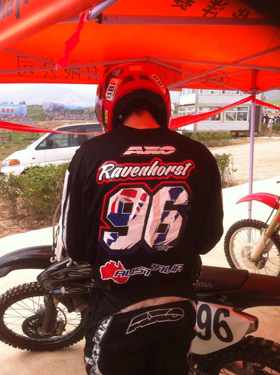 Thomas Ravenhorst just before racing got underway at the 2013 China International MX Invitation last weekend
Tom, who only just started racing motocross three years ago, finished just outside the podium places in the International 250cc class after battling some of the world‰Ûªs best motocross riders and Shouzhou‰Ûªs extremely hot and humid conditions.

‰ÛÏThe Invitational was incredible." Ravenhorst enthused. "I had so much fun racing and meeting with fans.

"China was pretty full-on. I was surprised by the amount of people everywhere but I loved experiencing their culture,‰Û