Riders Ready To Throw Down During J2 Best Whip Contest. 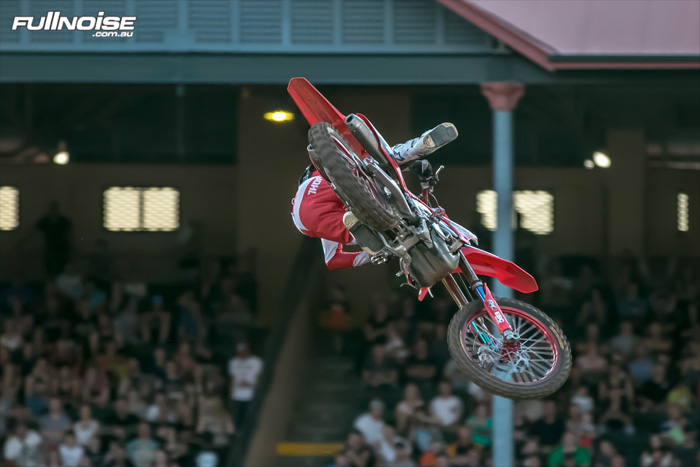 There‰Ûªs not a Supercross fan on the planet that doesn‰Ûªt appreciate a big Whip, so is should come as no surprise that organisers of this Saturday‰Ûªs (November 21) GoPro fourth round of the 2015 Australian Supercross Championship presented by Penrite Oils at Jimboomba X Stadium in south-east Queensland will stage a Best Whip contest.

The Whip is the quintessential Supercross big air trick, and the best exponents of it just about turn their bikes 180 degrees to the direction of travel in the air, the back wheel almost passing the front, before bringing it all back into line and making a safe landing.

At the J2 Jimboomba Supercross this Saturday, six of the best big Whip masters will get to strut their stuff in a special aerial shoot-out that will bring the fans to their feet and turn their eyes the size of dinner plates.

The Best Whip shoot-out will pit ‰Û÷Team Honda‰Ûª against ‰Û÷Team Yamaha‰Ûª as the following riders dog-fight to rule the night sky:

‰ÛÏThere are battles going on in every class of the 2015 Australian Supercross Championships this weekend, but the battle for the title of Best Whip at the J2 Jimboomba Supercross is going to be every bit as fierce as the racing,‰Û