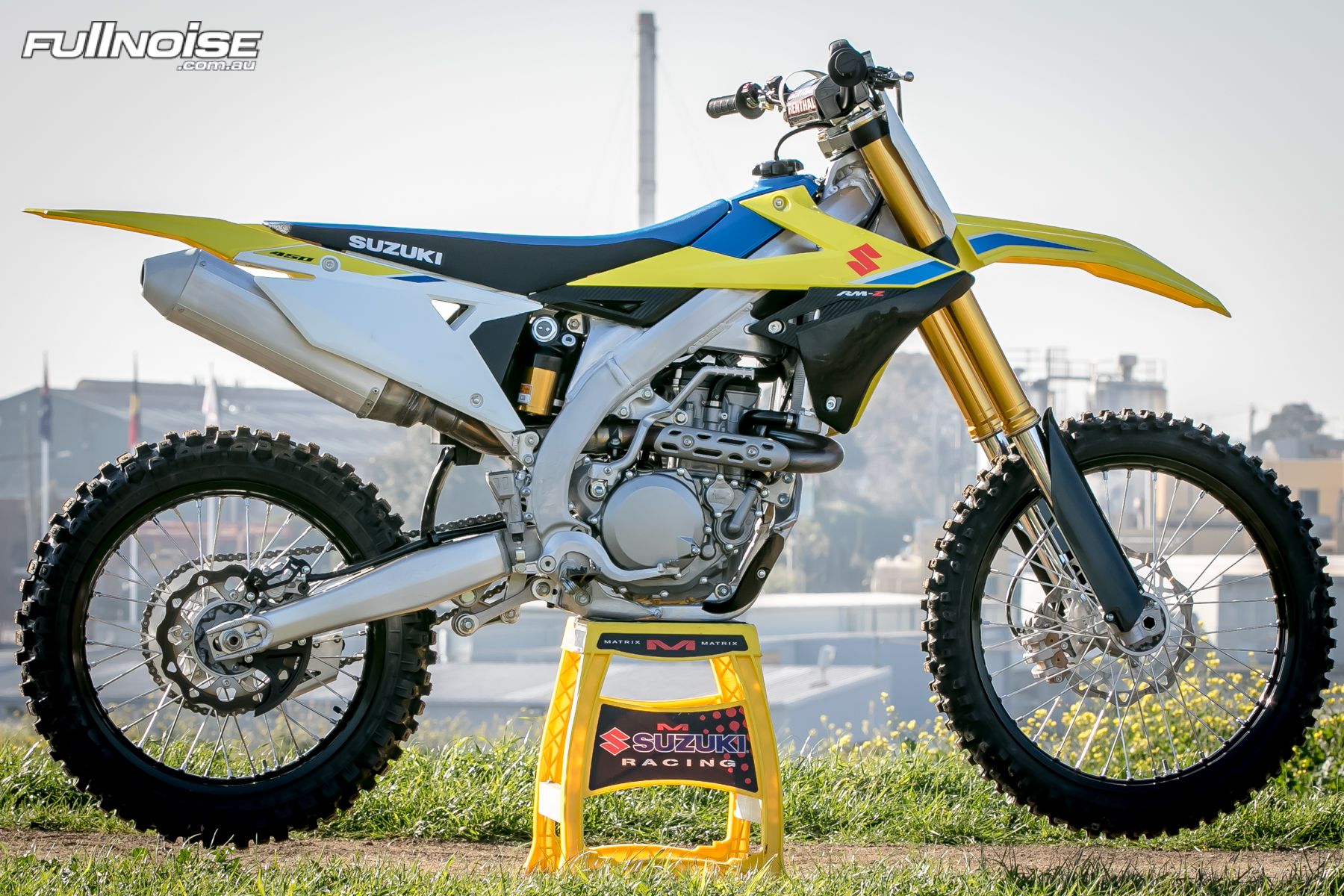 The 2018 Suzuki RM-Z450 is a bike that we have been hanging out to throw a leg over since we first caught wind that Suzuki had a all new bike for this coming race season.

The bike itself, though in full works form has been racing the world motocross championship (MXGP) throughout the 2017, but the full production version that will be available on show rooms floors has only recently seen the day of light.

Suzuki Australia were able to get hold of one of the first production bikes to leave the line and with an invite to spend a day riding the bike for Fullnoise.com.au for our first taste of the new beast along side the good guys from Dirt Action, we made the trip over to Park4MX in Victoria to ride not only the RM-Z450 but also the 2018 edition of the RM-Z250.

Before we get to far into our thoughts on the new bike, click HERE for a quick run down on the host of changes to the new generation Suzuki 450 four-stroke race machine. 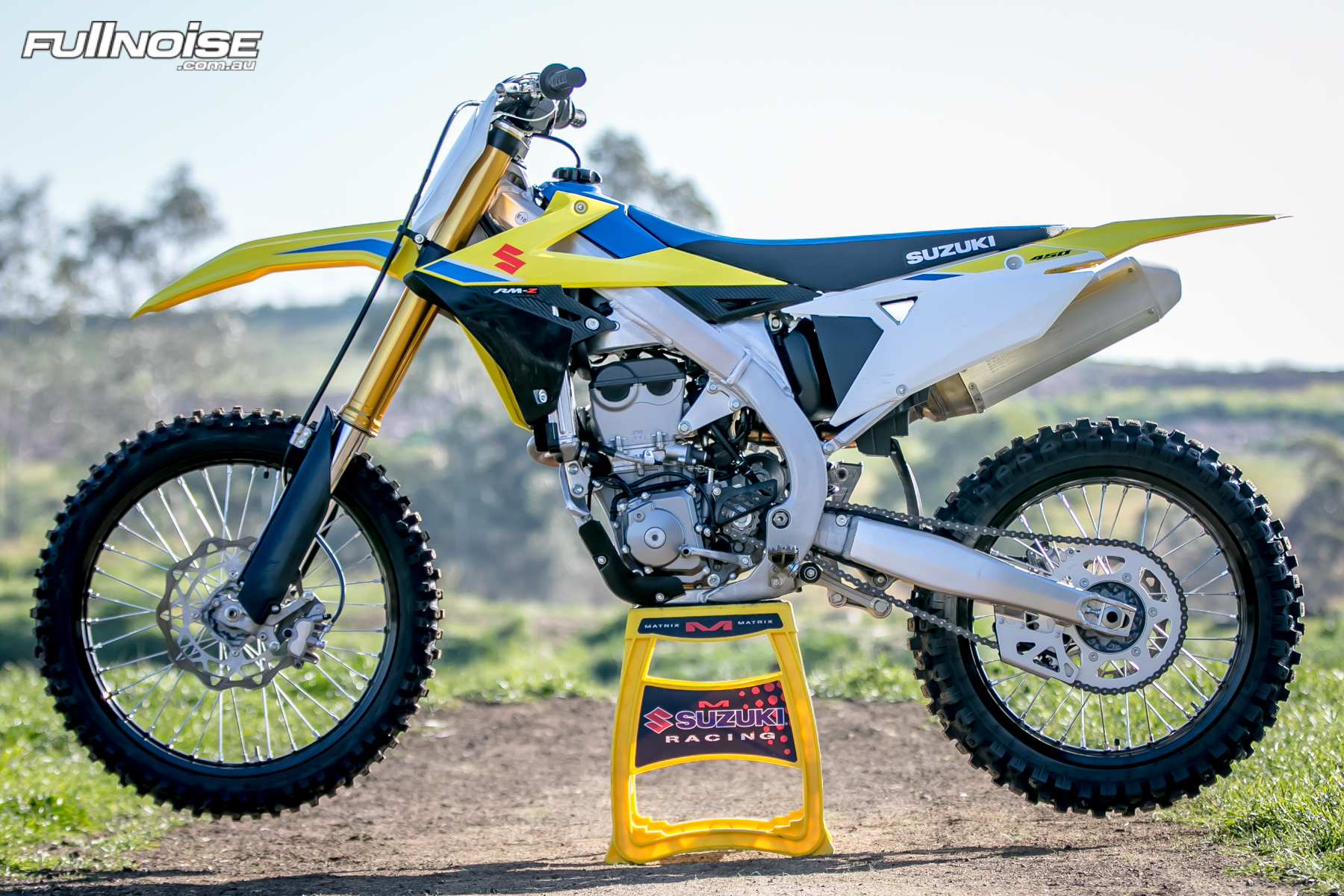 The first thing you take note off when riding any new bike is the overall look of the bike. Be it from a distance, or close up, the 2018 Suzuki RM-Z450 is one cool looking bike, with the now traditional yellow and black colour way highlighted with the nice addition of what I would describe as a deep baby blue and after watching the GP bikes get around in the MXGP this year, it certainly gives the production bike a bit of that GP touch to it.

It is not until you get up close and personal with the bike, you realise just how much time and effort the team designing this bike have put in to the finer details of the finished product.

From the new chassis that still retains the sharp lines from previous models of the bike, the new gold coated showa 49mm spring forks and Shock Reservoir, the black wheels to the all new plastics that mould into each other seamlessly and wrap around the frame perfectly at every juncture.

The overall finish of Suzuki bikes has always been good, but nothing outstanding, for 2018 they have gone to the extra effort and spending just a little time walking around the bike you soon notice just how well everything fits together. 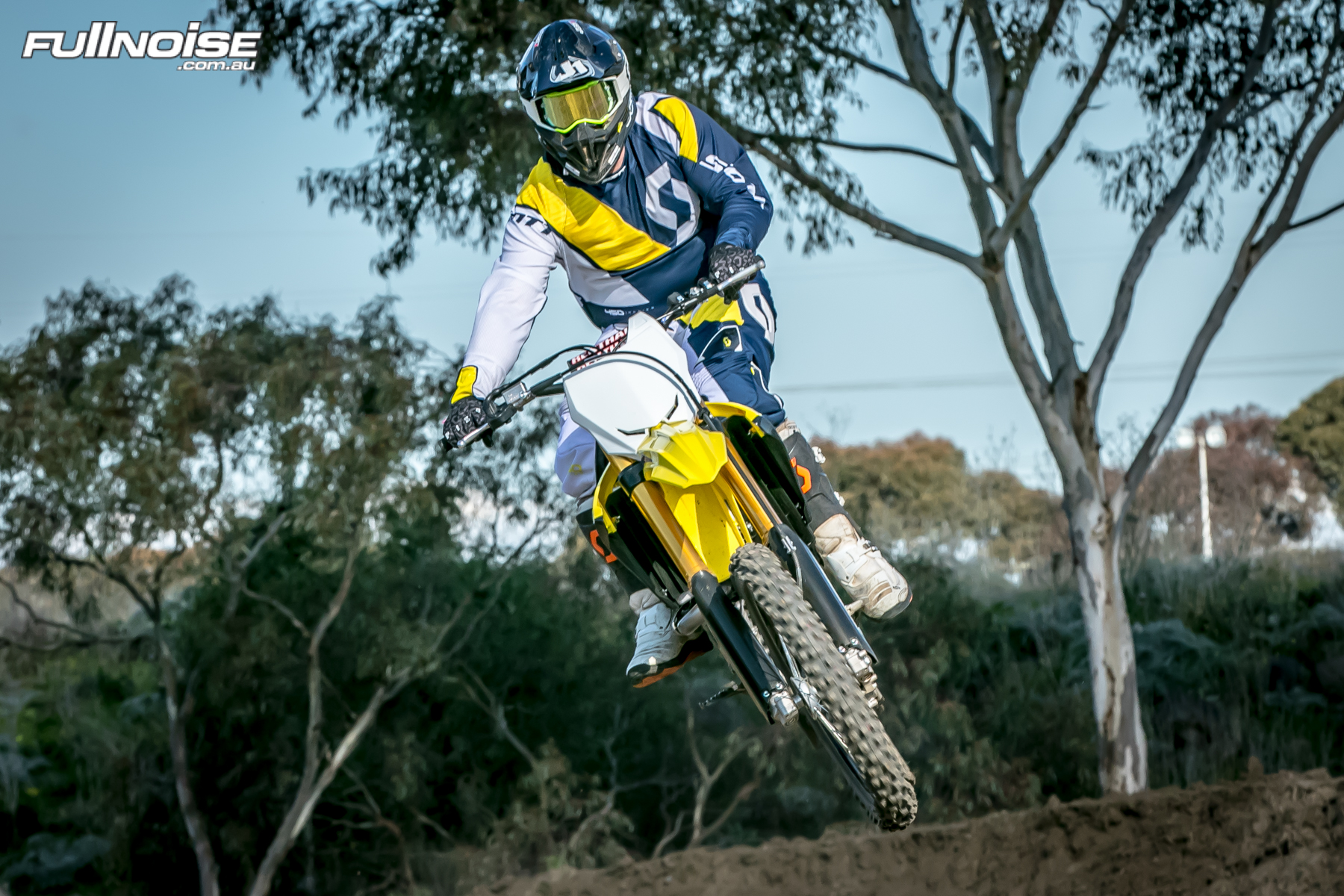 It is always interesting to sit on a new bike for the first, especially a all new bike, and the initial feel you get sometimes has a lot to do with the last bike you rode!

As I mentioned above, we spent the day along side the team from Dirt Action, with Shane Booth putting the RM-Z450 through its paces in the morning, while I spent the morning on the RM-Z250, a bike I absolutely love, it may not be the lightest 250F in the class, but it sure feels super light and nimble on track and turns on a dime.

After a couple of hours of riding and countless laps, Boothy and myself swapped bikes literally out on track. I finally had hold of the bike I had been waiting close to a year to get hold of!

Sitting on the 18 RM-Z450 for the first time, it certainly had a bit of a different feel to both the 2015 model I spent 18 months aboard and also the 2017 that I had ridden about 12 months prior at Echo Valley, Qld, but at the same time had that familiar feel about it.

Maybe it was just being back looking over the bars at a Yellow front fender again, but as much as I thought there would be an overwhelming all new feel to sitting on the new Suzuki, it did not take long to feel at home. As for the motor, for 2018, Suzuki has stuck for the most part with its tried and tested 450 power plant but has changed the Inside the airbox with the air-filter aperture now 30-percent larger for enhanced airflow, and an MXGP-style mudguard helps keep mud and dirt out, contributing to greater engine durability. The outlet tube leading from the airbox to the fuel-injection throttle body is also straighter, reducing intake resistance for increased power across the rev range.

The fuel-injector spray path now aims fuel upward to hit the throttle butterfly valve directly for improved atomisation. Inside the intake port, the shape is updated for improved tumble flow of the charge as it enters the cylinder, boosting power at all engine speeds. The intake-port shape is matched to a new high-lift intake-cam profile, which further improves intake efficiency and engine output. Inside the combustion chamber, a new piston-rib design adds strength and durability to match the engine‰Ûªs higher output. While an updated muffler conforms to the latest.

Taking off the first thing I noticed again was the engine was quite punchy and free revving, much in the same way I remembered the previous models.

I have always found the Suzuki 450 to be quite lively straight off the bottom and with the handful of changes to this years motor and airbox, it was still certainly the case, though felt as though it had a little more power through the power range I was using, which was pretty much all bottom to mid. Im not the type of rider that is going to be holding a 450 on or near the limiter in any gear.

Though I only spent a couple of hours in total riding the new bike, with probably less than a full hour of ride time, It would be fair to say if I was going to spend a good deal of time in the future riding a 2018 RM-Z450, I would probably go down the same path as previous years and run slightly taller gearing, just to take the edge off the initial power delivery knowing there is more than enough there to still pull out of most turns in third gear. 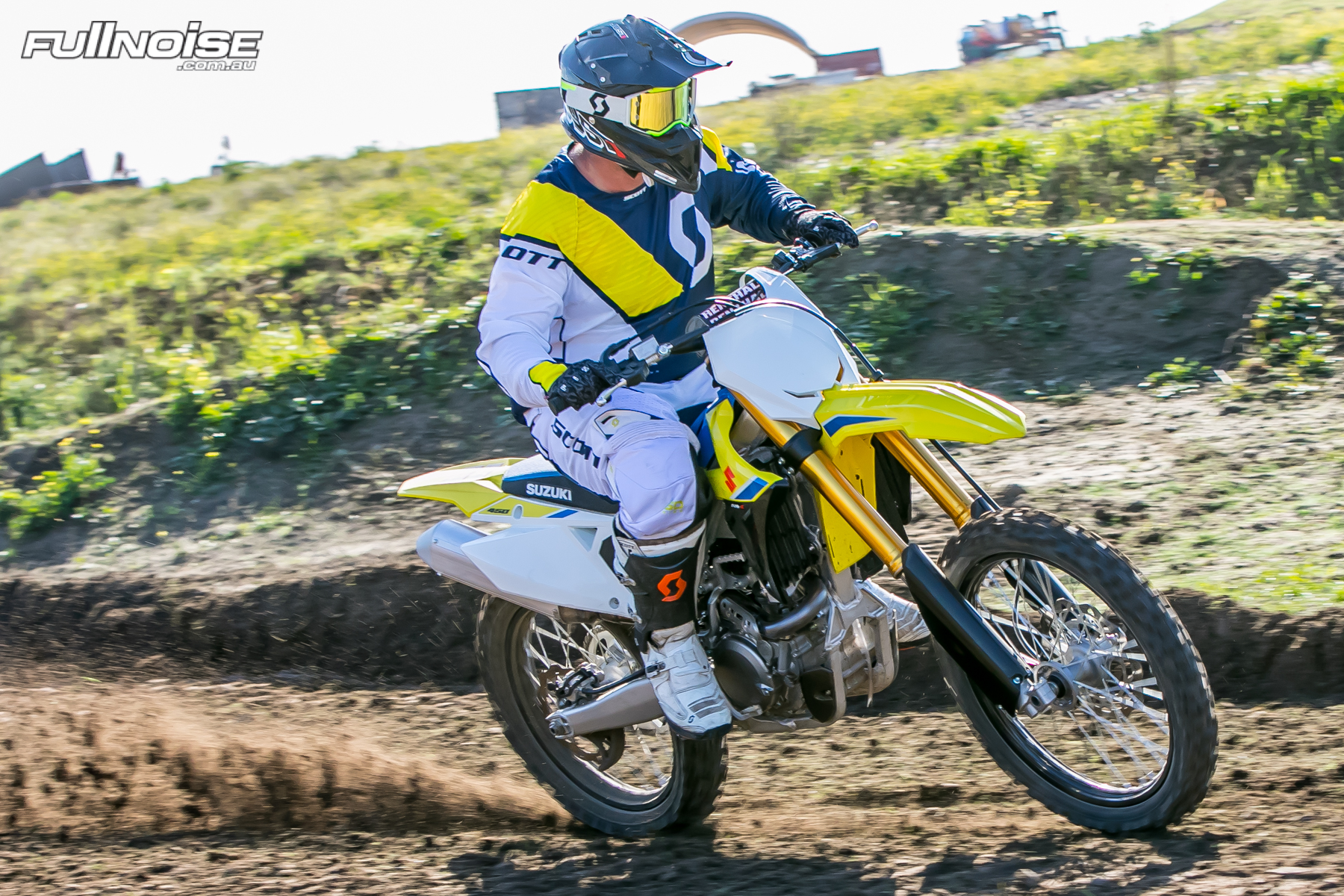 After spending a few laps adjusting to the power of the bike and the way it delivered it, I set my focus on a couple of corners out on track.

Near instantly I felt at home standing through some of the wider sweeping corners, was surprising confident over the majority of jumps and had complete trust in the back end coming out of turns.

The one thing I was surprisingly struggling with, was getting the yellow 450 to turn into and hold its line through a tight rut I had formed earlier in the day.

I headed back to the pits and had a chat to Suzuki Australia‰Ûªs Marketing co-ordinator Matt Riley who was looking after us for the day. We chatted about how I was feeling on the bike and I let him know that I was struggling on the tight inside ruts, and how I could not get the front end to stay where I wanted it.

He let me know that Boothy had stiffened up the front fork a little and was running 108mm of sag. So with that in mind we softened up the front a little and checked the sag, which for myself was also sitting at 108mm, we dialled it back to 105, getting the rear end to sit up just a fraction higher.

And this is all it took, to go from having the front wheel push a little wide out of a tight inside rut, to having it hooking up and tracking perfectly every single time.

The move to the Showa 49mm spring fork was actually one of the biggest things I was excited about when Suzuki first unveiled the details on the production version of the 2018 bike. 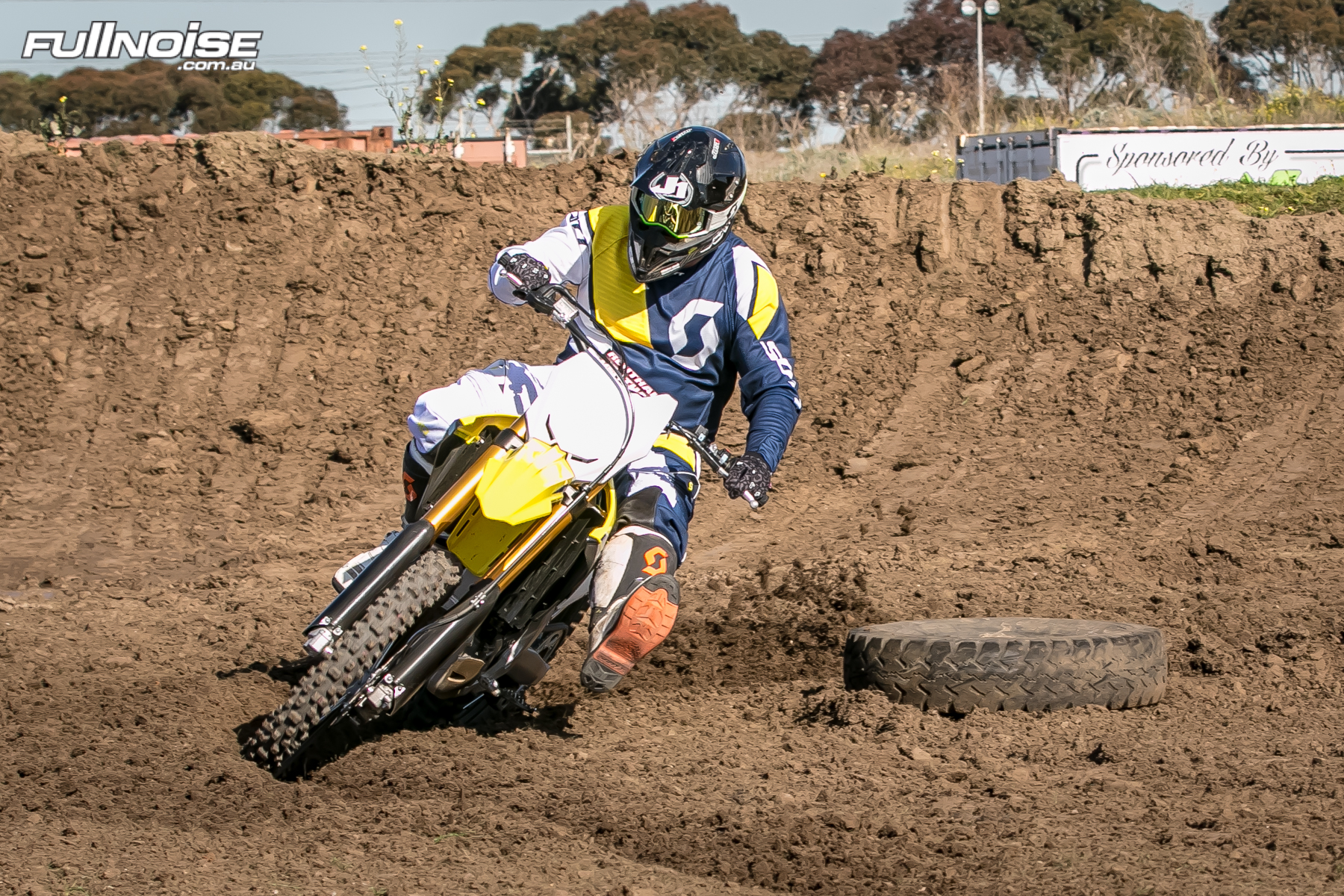 I really like my 2015 RM-Z450, but the Showa SFF Air fork frustrated me. Some days it would feel fine, other days on the same track in the same conditions it would just not give me the same feel or confidence and when it comes to riding, for myself confidence makes a huge difference, so the move to a spring fork in my eyes was a great move by Suzuki.

Just the initial feel on the first part of the stroke on some of the chopped out hard pack clay at Park4MX felt so much smoother on the RM-Z450 compared even to the KYB air fork on the RM-Z250 on the day and personally though only having ridden on the KYB air fork, much preferred that over the Showa SFF Air Fork in terms of the initial feel of the fork on hard chopped out surfaces.

As for getting a feel for both the front forks and the new Showa Balance Free Rear Cushion (BFRC) shock, as with most media launches the track does not really get rough enough to give the opportunity to really get a feel for what it would be like in race conditions where you see a lot more and a lot bigger braking bumps. For what the track had to offer both the front and rear of the bike felt great, and most importantly predictable. Once I had the suspension sorted with a few clicks and the sag set, I was more than impressed with how It handled both in a straight line and through corners, and hopefully will have an opportunity again to really get to spend some time on this bike on conditions we are all used to seeing on race day or a general practice day.

Overall the 2018 Suzuki RM-Z450 is a great package, sure it would have been nice if it did come with an electric start and if I was spending more time focused on Enduro racing it probably would be more of a factor.

In every other aspect there is nothing you can fault with this bike, the updated chassis and suspension as a package for my mind is a huge step forward, the overall finish of the new Suzuki is an improvement, the engine though only receiving a few updates, is super strong and has more than ample power for the average mortal and from my experience from years past is a reliable power plant and the new Suzuki RM-Z450 is certainly one of the best looking bikes you will lay your eyes on.