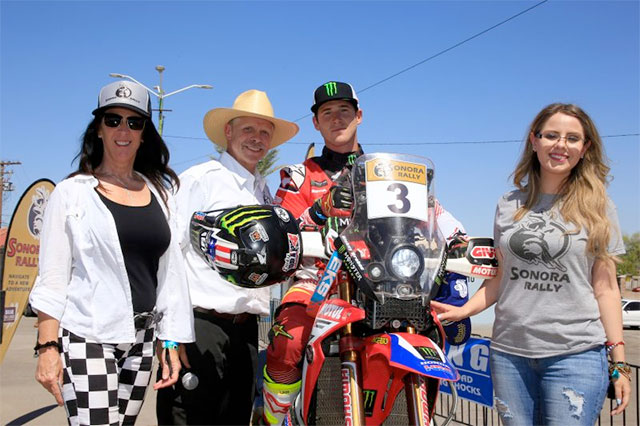 After making it through the tests and technical scrutineering, the Honda CRF450 RALLY emblazoned with the number three of Ricky Brabec, set off on a four-stage 1318 kilometre rally. The first half of the rally was battled out between Punta PeÌ±asco and Puerto Libertad, with various timed special stages of over three hundred kilometres apiece. Ricky Brabec commanded throughout each and every sector and was head and shoulders above the rest of the field.

The team, managed by Taichi Honda with the collaboration of American Honda and Johnny Campbell‰Ûªs JCR Honda, then transferred to San LuÌ_s RÌ_o Colorado to dispute the final stretch of the rally, leaving the track behind as the race took to the dunes. An outstanding Brabec shone throughout, opening the track and navigating at a cracking pace to wrap up the race with a substantial gap over rivals. Moreover, the rider was clearly feeling at ease back on the Honda CRF450 RALLY bike for the first time since the Dakar 2017 adventure, which saw Brabec retire shortly before the race finish.

"It was my first time here at Sonora," Brabec said. "The last few days were pretty challenging in the sand dunes. It was good practice for me to open everyday. I think that with a full-year of training and doing this stuff will be good to prepare for the Dakar. The race was smooth for us and for the team. The roadbook was very technical, which was a good challenge. I don‰Ûªt think that there were any injuries, so we are ready for the rest of the year." 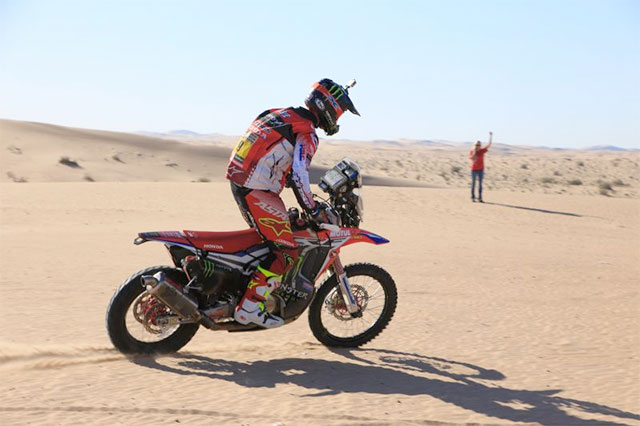 Ricky Brabec on his way to the Sonora Rally 2017 win
Taichi Honda, Monster Energy Honda Team Rally Project Leader, added, "The Sonora Rally has been a great test which means it has provided the team with a lot of good data, in this the first rally of the season that will culminate with the Dakar 2018. Ricky did a really good job, it's a pity that Joan couldn't be here. It has been very good training for Ricky; he navigated well and he had to work very hard to open the track everyday. Without doubt, it has been good preparation towards the next Dakar. The team will continue to work along this line."

Monster Energy Honda Team is due to continue its programme with the participation of Portuguese rider Paulo GonÌ¤alves and Argentinean Kevin Benavides in the first round of the FIM Cross-Country Rallies World Championship, set to take place in Abu Dhabi from 1st to 6th April.