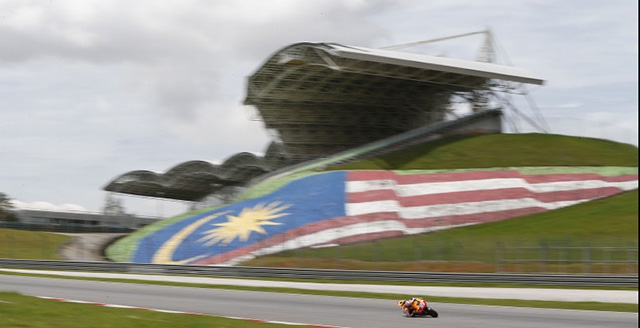 This week the Repsol Honda Team will head east to Asia for the first of three fly away races in Sepang, Malaysia.

The 2,300 acre Sepang International Circuit in Malaysia is one of the world‰Ûªs best motorsport facilities, holding its first Grand Prix in April 1999 and setting the standard for race circuits Worldwide.

With four slow corners following two long straights and ten medium to high-speed corners, the wide track is particularly favourable to overtaking manoeuvres and plenty of open throttle. One of the longest laps in MotoGP is made all the more gruelling for riders by intense heat and humidity. Sepang is located around 50km south of Kuala Lumpur city.

Championship leader Marc Marquez will be looking to increase his lead of 39 points over second place Jorge Lorenzo and teammate Dani Pedrosa, in 3rd,, will hope to regain some points after crashing out in AragÌ_n and scoring a DNF, caused from contact with Marc.

"Now we head to Malaysia for the first of the fly away races and I'm ready to get there!," Marquez enthused.

"Sepang is a circuit I like, it's the first track we were really able to test the Honda bike at so it will be nice to go back there and regain the feeling, and to see what we have learned over the season! I know there is a hearing set for Thursday with race direction to discuss the incident with Dani in AragÌ_n, there is not much we can do, we need to wait and see what they say"

"I felt good in the last race riding at the front, and I look forward to finding the same feelings on the bike again in Sepang," the Spaniard said.

"The track has a little of everything, fast and slow corners, hard braking and long straights and the weather conditions make it hard work. Physically it's been a hard week, I couldn't walk for three days due to the pain in my hip, but it's getting better every day so I'm hoping to be in perfect condition for the weekend"

Race direction have confirmed there will be a hearing on Thursday to look into the incident from AragÌ_n, where Dani's wheel sensor cable was broken after contact with Marc, during the race.