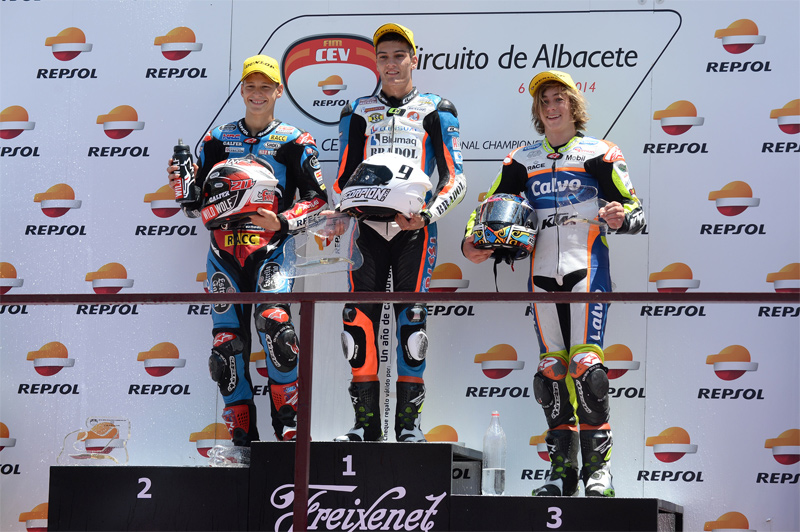 After a tough season that started with injury, Remy has bounced back and against the odds, finished his first Grand Prix, at Misano, on unfamiliar machinery on a new track.

This time, with the experience of that first GP under his belt and a machine identical to what he races in the CEV series, Remy goes to Phillip Island with more confidence and control, with the view to finish the race and learn as much as possible from the weekend.

A quick chat with the 16-year-old reveals a level head and excitement at the prospect of racing in Australia...

You've had a tough season in the FIM CEV Repsol series riding the Team Calvo KTM. What are the positives that you have been able to take from the season?

Yes the season has been tough but I have learnt a lot and I am happy with my progress this year. The results may not look good on paper but the level of the championship this year is so high, three Moto3 World Championship lap records have been broken in the CEV series this year! I am happy to be running around the top five now. The skills I have had to learn to get there took the first part of the season, so I am happy with my season so far, as far as a learning curve.

Thrown in the deep end at Misano for your first World Grand Prix, you got through a very tough weekend of setbacks to still finish your first grand prix. Did the hard yards and dramas of the CEV series condition you to just get the job done at Misano?

Misano was not the best weekend for me, we had some of the worst circumstances and it was the first ride after my crash at Navarra. The bike, team and track were completely new so it was hard to learn fast. I was happy to finish the race and take experience but now I can't wait to get back on my bike and show everyone what I can do.

With that first GP out of the way, Phillip Island should be slightly less daunting and allow you to get on with the job of riding. What are your realistic expectations?

I will be on my bike again so it won't be as scary as the first one. I know what to expect now and I think I will be able to deal with what's to come. My expectations are to learn the track and have a good race to take a lot of experience from it.

The pressure of owning the surname Gardner will no doubt be there at Phillip Island but you are there to gain experience and learn. How do cope with the outside pressure and expectations?

I don't think the name really has an affect on me. I am not Wayne Gardner, I am Remy Gardner, I am different person and I want to be known by my name. So I don't put any pressure on myself or get any from the people immediately around me.

Have you got much experience at the Island?

I don't have much experience at the track, I rode and 85cc there, but every corner was flat out. I hope I can learn the track fast and get into the rhythm of things.

Are you looking forward to meeting some new Australian fans and soaking up the atmosphere?

I can't wait to feel the vibe from the fans in Australia and meet everyone that has been supporting me!

My bike I will be riding at the Island will be the exact same bike as mine in Spain. It will not be quite as fast as the GP bikes but its better to be on a bike I know.

You are a keen surfer, will you be getting a Phillip Island surf in while you are here?

For sure! As soon as my riding responsibilities are over I'll be hitting the local spots so hopefully it will be working!

Son of 1987 World 500cc Motorcycle Champion Wayne Gardner, Remy has been riding bikes since he was four. However he wasn't introduced to the racetrack until he was ten years old in 2008.

Remy tried his hand very briefly at motocross and enduro before falling in love with the speed of dirt track and longtrack racing. He follows in the footsteps of other famous Australian riders who started dirt track racing at a young age, including his father Wayne, Mick Doohan, Troy Corser, Troy Bayliss, and more recently Casey Stoner.

For two years Remy honed his skills in both dirt track and longtrack, competing at State and National level before training on the tar, initially on his dirt track bike (supermotard), and then on a Moriwaki 80cc. In NSW Australia where Remy lived at the time, children under the age of 13 are not permitted to compete in road racing, so Remy trained under the guidance of his father and other respected Australian trainers.

In October 2010 Honda Australia invited Remy to represent them at the NSF100 Trophy Worldwide Mini Bike race at Albacete circuit in Spain. He was up against leaders of the NSF100 Championships from around the world in his debut road race, finishing a respectable 29th out of 36 riders. Remy's Australian road race debut was a resounding success at Phillip Island in December 2010, when he took home the MRRDA Australian Nippers Championship for under 13 year olds.

In 2011 Remy commuted from Australia to Spain to compete in the Pre-GP Moto3 class for the Monlau CompeticiÌÄå_n team, in the 2011 "Campeonato MediterrÌÄåÁneo de Velocidad" (CMV). After finishing second in the championship, TGR made the decision to relocate to Spain in order for Remy to race in the most competitive environment available.

TGR is now based in Barcelona, and Remy has participated in the feeder class to Grand Prix Racing, the "Campeonato de Espana de Velocidad" (CEV) since 2013. He is currently riding for the Madrid based Team Calvo/Laglisse, and sees this, as the apprenticeship he hopes will take him all the way to GPs in the not too distant future.