Rejuvenated title hopes for Guintoli after home round success 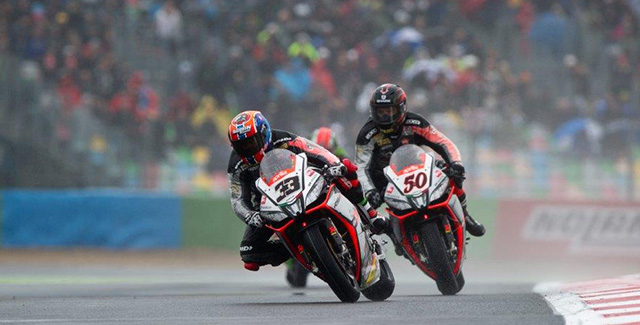 The penultimate round of the 2014 eni FIM Superbike World witnessed a change of momentum for the title race, which will be decided on November 2nd at the Losail International Circuit in Qatar. Thanks to a win and a second place in the two wet races at Magny-Cours, Sylvain Guintoli (Aprilia Racing Team) narrowed the gap to leader Tom Sykes (Kawasaki Racing Team) to just twelve points.

The 32 year old Frenchman was cheered on by a vocal and enthusiastic, race weekend home crowd of over 74 000.

Marco Melandri, who was second and first in the two encounters, completed the perfect race meeting for Italian works manufacturer. The former 250cc World Champion showed great form once again by stepping atop the podium for the sixth time in twelve races. Sykes on the other hand did his best to contain the damage by finishing the two encounters in fourth place after claiming an impressive Pole Position in dry conditions the day before, when he took the outright fastest lap ever recorded at the circuit.

"It‰Ûªs been a great weekend for me and the team, as we managed to close the gap to the leader," Guintoli said.

"As soon as I saw the weather forecast for today, I immediately thought there would have been a good chance to make some ground to Tom. I took some risks at the beginning but once I built a good lead I kept focused and tried to avoid any mistake, in order to get the best possible result. I‰Ûªm very happy although I‰Ûªm already thinking about the Qatari Round, as it will be the title decider. It‰Ûªs a track I know quite well, I like it and I think it will suit the RSV4 well. I wish we were racing there tomorrow!‰Û 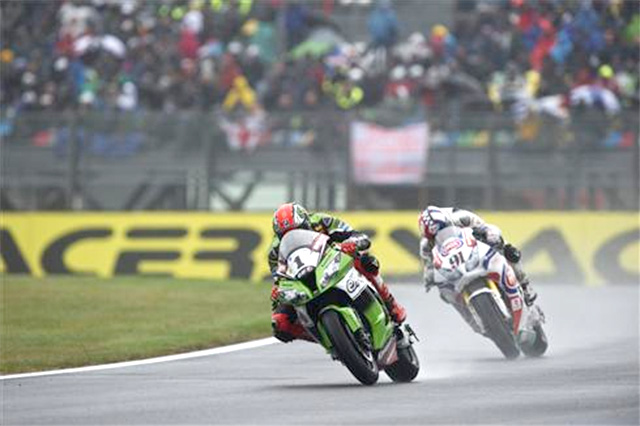 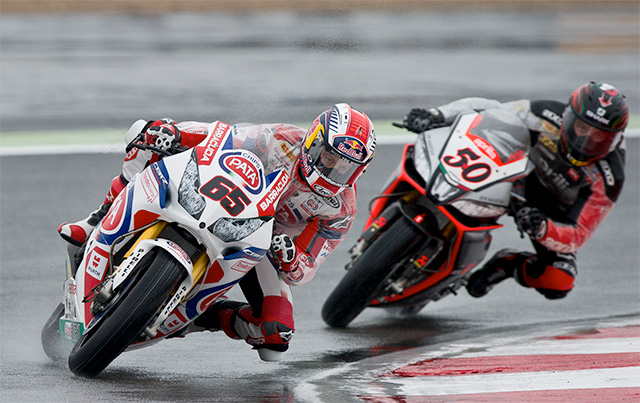 Local rider Sylvain Guintoli (Aprilia Racing Team) took race one in front of an enthusiastic French crowd at the 11th round of the world superbike championship at Magny-Cours, edging out at the finish line his teammate Marco Melandri.

Thanks to his 3rd win of the year, the 32 year old Frenchman narrowed the gap to series leader Tom Sykes , 4th at the flag, to 19 points. Jonathan Rea scored a well deserved third place ahead of KRT duo of Sykes and Baz.

Because of the wet weather, the race distance was reduced to 19 laps and after a number of riders fell in the warm up session, the opening laps were very tentative for several riders.

In the early laps, it was Rea who led the way with the spray making it extremely difficult for the mid-field riders. Behind him Guintoli gave chase after passing Sykes at the end of lap 1.

Guintoli was soon ahead of Rea and the Frenchman began to ease away, much to the delighted French crowd braving the wet conditions.

By one third distance the Aprilia at the front was Guintoli, ahead of the chasing pack with Marco Melandri playing shotgun to his team mate. Just behind was Loris Baz who had also overhauled Sykes and Rea as they began to lose touch with the leaders.

With five laps to go Melandri had closed to within a second and the Aprilia duo was left to fight it out for the win. Victory eventually went to Guintoli, after it appeared Aprilia team orders had intervened. 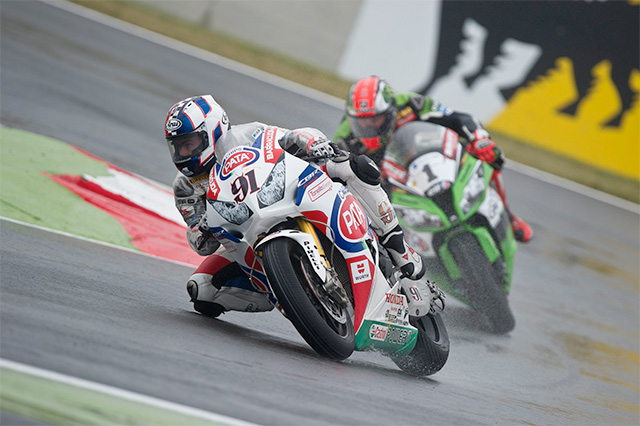 In similar conditions to the opening race of the day, Marco Melandri (Aprilia Racing Team) won race two with a 2.6 second advantage over teammate, Sylvain Guintoli. Thanks to his sixth win in the last twelve races, Melandri elevated himself to third place in the standings, whilst Guintoli narrowed the gap to series leader Tom Sykes (Kawasaki Racing Team) to 12 points.

Earlier leaders Davide Giugliano and Jonathan Rea (Pata Honda World Superbike Team) both crashed spectacularly, before remounting only to retire to the pits. Rea‰Ûªs crash left the Aprilia pairing of Sylvain Guintoli and Marco Melandri to dual it out for the victory with the Italian getting the better of his French teammate this time out.

For Team Toth BMW it was a race for real celebration as both of their riders scored points in the same race for the first time in their short WSBK career.