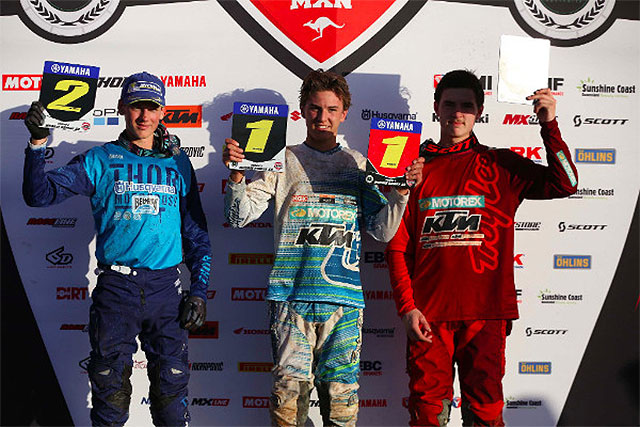 The Yamaha 125cc Junior Cup riders re-joined the National Championship for their second outing of the year yesterday, with KTM‰Ûªs Regan Duffy taking a clean sweep at Round 5 of the Motul MX Nationals in South Australia.

With Murray Bridge dishing out speed, a deep red sandy surface, and of course epic racing the 125cc Juniors added to the excitement at Round 5, going at it across two motos, with Duffy concluding the day‰Ûªs proceeding with reason to celebrate.

Unfortunately for Regan Duffy, despite clocking the fastest time during qualifying, the KTM rider was docked three positions at the conclusion of the session due to jumping on the first lap.

But in the first first moto 15-minute moto for the Yamaha 125cc Junior Cup riders, Duffy redeemed himself, the KTM rider getting to the lead early and then staying there for the entire race.

Behind Duffy, Yamaha‰Ûªs Kukas and KTM mounted Hayden Matterson spread out in second and third positions, followed by Mason Rowe and Alex Larwood.

When the chequered flag was displayed in race one there had been little change to positions, with Duffy securing the opening moto victory from Kukas who held on to finish in second. Third place was taken by Rowe, while Semmens crossed the line in fourth ahead of fastest qualifier Malkiewicz. Matterson, James Scott, Tyler Darby, Larwood and Cooper Sheidow completed the top ten in race one.

In moto two, it was once again Duffy who was unstoppable.

The KTM rider battled with Husqvarna's Malkiewicz for the entire moto, proving that despite the track being the roughest it had been all day yesterday afternoon, that the youngster was more than able to adapt to the conditions.

With the results from both races combined yesterday it was Duffy who went undefeated and landed on the top step of the podium, second overall went to Malkiewicz while Semmens finished in third.

Duffy now holds a 12 point lead in the Yamaha 125cc Junior Cup Championship with one round remaining.

"It was the perfect day for us, we went 1-1 for the overall so couldn't be happier," Duffy said.

"I'm really happy with my riding at the moment, and we'll be heading into the final round with the championship lead, so all in all it was a good day at Murray Bridge."

The third and final outing for the Yamaha 125cc Junior Cup category will take place at Coolum in Queensland on August 19-20.