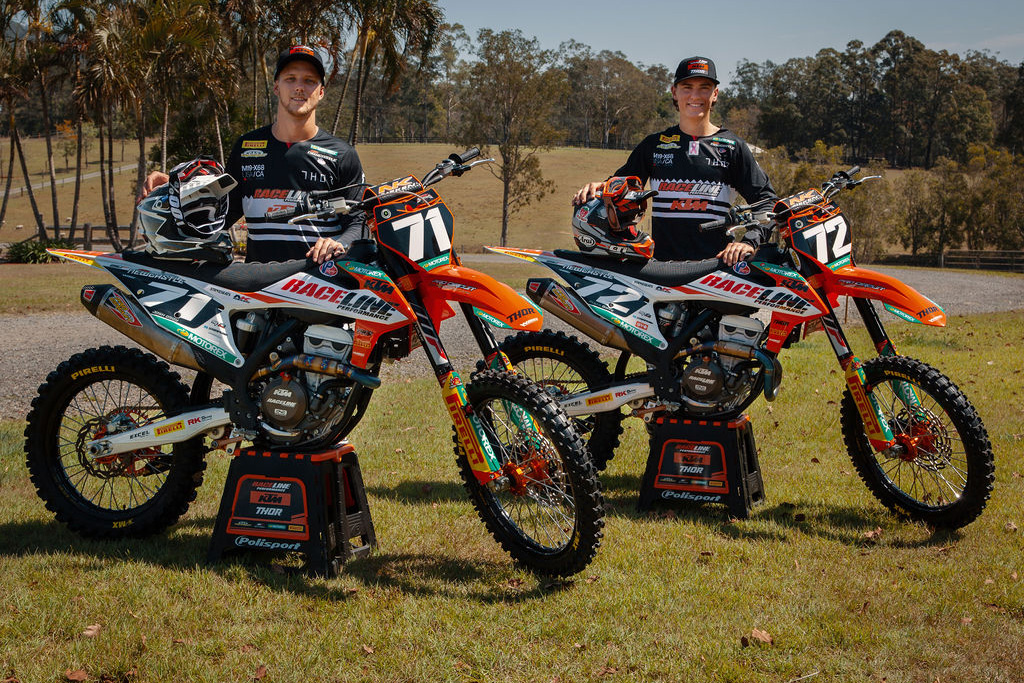 Josh Osby (L) and Regan Duffy
The Raceline KTM Thor team are ready for round one of the Australian Supercross series, taking place this Saturday night at the Brisbane Entertainment Centre.

The team will field a two rider line up with both riders competing in the SX2 category.

17 year old revelation Regan Duffy remains with the team after a stellar 2019 season, winning the MXD class championship as a rookie in the MX Nationals series. Most recently returning home from an impressive international debut riding a 450 in the open class representing Australia at the MX of Nations taking place at Assen, Holland. Duffy is looking forward to his debut year in Supercross;

"I'm really enjoying the process of learning Supercross and I'm surprised how quickly I feel at home on a Supercross track. I'm not putting any pressure on myself, my goals are to learn as much as I can this year and stay healthy, but with that being said I'm looking forward to being competitive and mixing it up at round one," said Duffy.

American import Josh Osby returns for a second year with team, after taking an impressive 6th position in the 2018 Australian Supercross SX2 series, with a season best third position at Jimboomba. After a solid 2019 season so far in the East Coast AMA Supercross series and Canadian Motocross Nationals, Osby is excited to be back in Australia;

"It's great to be back with the Raceline KTM Thor team and after three weeks back on the KTM I feel we have picked up right where we left off last season, maybe even improving a little. I really gel with Chris Woods, Sean Featherstone and the rest of the crew, it's a good fit for me over here. After last season I have valuable experience in the Australian Supercross series and feel that I have the speed to be on the podium, even challenge for race wins if the opportunity is there," said Osby.

"We are thrilled to have Josh Osby back with us from America and of course Regan Duffy has been a revelation this year, we have two great riders ready for Supercross. It's always a quick turn around after the MX Nationals finishes and after weeks of hard work and preparation we are excited to go racing at round one this weekend."