RedBull Rookies Stirring a Potent Potion at the Sachsenring 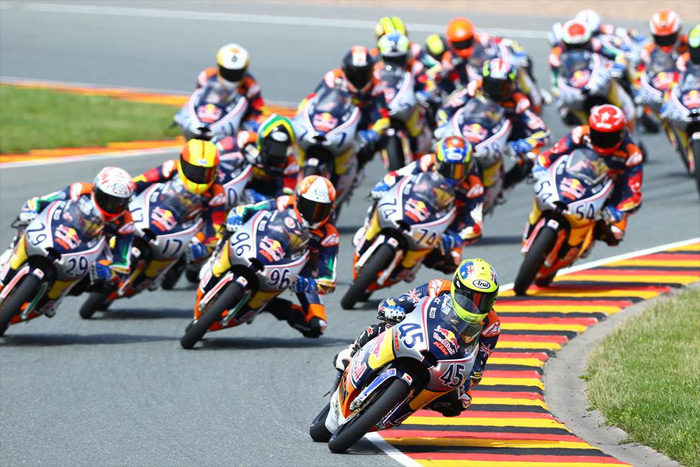 'The Cauldron', such a good name for the Sachsenring, the bowl where the action so often boils over. And this year throw into it the bomb that is Bad Boy Bo Bendsneyder, the first rider ever to score four Red Bull MotoGP Cup wins in a row.

He is certainly the man on form but the rises and falls of the Sachsenring, the tight twists of the stadium section and awesome drop off the hill down to the last two left handers might put a dent in the flying Dutchman's domination for races 5 and 6. For the 16-year-old missed last year's German Grand Prix after being injured at a non Cup event and therefore has some catching up to do.

That may well be all that his rivals need to level the playing field as the likes of Fabio Di Giannantonio, Oscar Gutierrez, Enzo Boulom and Olly Simpson have already demonstrated that then can push him very hard.

Di Giannantonio almost won Race 1 in Assen and the 16-year-old was only further adrift in Race 2 because a suspension change proved to be a mistake. With 3 second places in the last 3 starts the Italian is ready for a win.

Gutierrez has a second and 2 thirds already this year and the 15-year-old Spaniard who will have his 16th birthday the Thursday after race weekend knows no good reason why he should not be on the top step of the podium at the Sachsenring. Especially as he scored a great 5th in Race 1 there last year.

Unlike the trio ahead in Assen, Boulom probably still needs to take a step forward if he is going to win in Germany. The 18-year-old Frenchman was 13th and 14th there in 2014 but that was his level at the time. 12 months on he is a very different rider and he now lives well into the top 6. He will certainly be disappointed if he does not move up to claim a podium spot and if he can find the illusive perfect bike setting he could well make the forward stride.

Pace is not a problem for Simpson and the 17-year-old Australian sat on pole in Germany last year. He also led the race and has done so again in Spain and the Netherlands this season. Unfortunately the Assen crash that dislocated his shoulder kept him out of Race 2 and though he is bound to ride at the Sachsenring he will be stiff and sore.

Simpson stands sixth in the Cup table thanks to his excellent double thirds from Jerez but zero points from Assen has allowed Marc Garcia to move into fifth and the 15-year-old has 2 fifths from Assen to show that he is ready to threaten the podium regulars. Last year the Spaniard finished every race and was second in the final, this season he is adding pace to that consistency earlier.

This weekend's Rookies Cup races can be seen live on www.redbull.tv