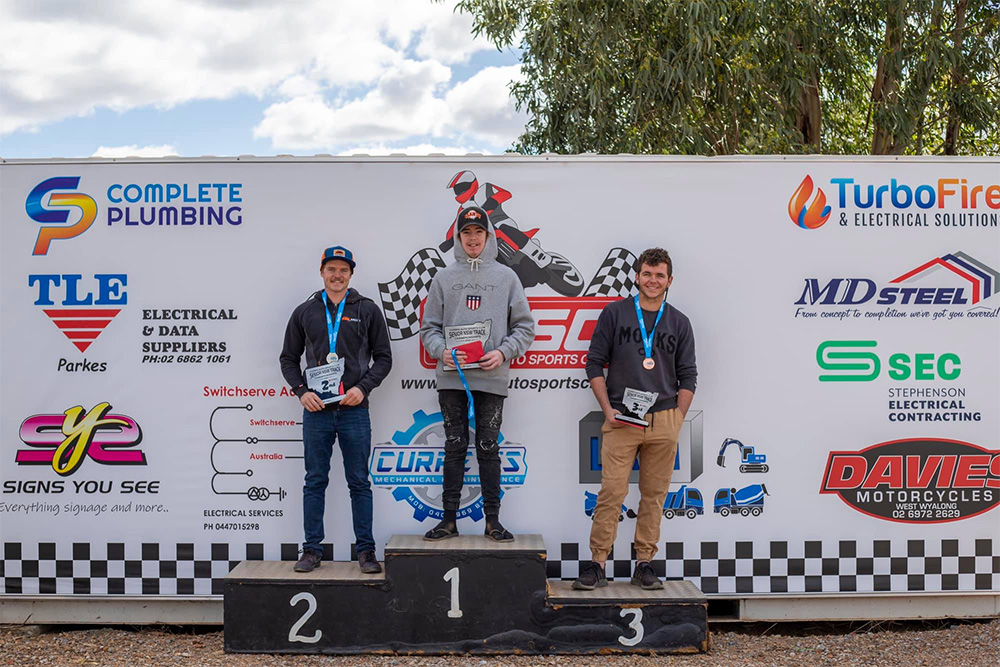 MX Open podium - Harrison Ryan, Jarred Brook and Thomas Donnelly
The sun shone although it was bitterly cold off track, but thankfully there was plenty of red-hot action on-track as the Forbes Auto Sports Club hosted its first-ever championship meeting on the weekend (April 10 & 11).

There were three championship classes staged over four rounds of heats before a repechage and pulsating final, the rest being decided over five point-scoring rounds.

Dirt Track Sidecars were the first final with the three big guns finishing on the rostrum - Scott Sandow / Wayne O‰ÛªMeley beating the topscorer from heats Kai Frame / Michael Bryant, with David Grainger / Trevor Gaze a close third. The Pro 450 class saw only five riders share the 12 heat wins, and as often happens that did not dictate what was to come in what was a classic final.

Even without winning a heat veteran Damien Koppe proved he is still an elite performer to almost win one for the older brigade. It took almost three of the four laps for Jarred Brook to get past him, while teenager Harrison Ryan can still be mightily pleased with third place behind such an accomplished duo, but still ahead of the rest of the classy field.

Not that Harrison Ryan was satisfied though, as he later turned in a faultless ride to win the MX Open final. Jarred Brook got up to second after a very congested opening lap and was closing in on Ryan, leaving the winner happy the final was not over another lap. Thomas Donnelly capped his weekend with a strong third place, again ahead of a classy field.

The MX Open win was Harrison Ryan‰Ûªs second class win after he had dominated the five rounds to claim the Pro 250 class. Second placegetters can sometimes be disappointed with results but runner-up Rory Hutchinson was at least happy to have relegated his brother Angus Hutchinson to third place.

There was only a small roll-up entry of slider machines with Michael Slade the most successful rider with the very busy Harrison Ryan restricted by several broken chains.

Even though Brisbane rider Briony Hendrickson continued her domination in the Women class the form of Hunter duo Keegan Pickering and the much improved Laura Saxon did not make it easy for the Queenslander.

In addition to the championship classes the Over 35s added their usual brand of close racing to the program with Tim Darmody edging out Brisbane rider Carl Hendrickson and Kenny Angel in a tight points battle.

Junior classes were only support acts but their racing again showed that the future of the sport looks to be in good hands.

The next group to progress in to the senior ranks, the 13 to Under 16s , turned on hard fought battles with Talon Cardinale edging out Cody Lewis and Daniel Kennedy on points.

The other junior winners were David James and Sam Drane, who had to overcome his Forbes clubmate Hugh Hope-Hodgetts.

The final wash-up from the title meetings was all positive, except for what were a few hopefully not too serious injuries.

The track and the organisation were praised, the only complaint being how cold it was!