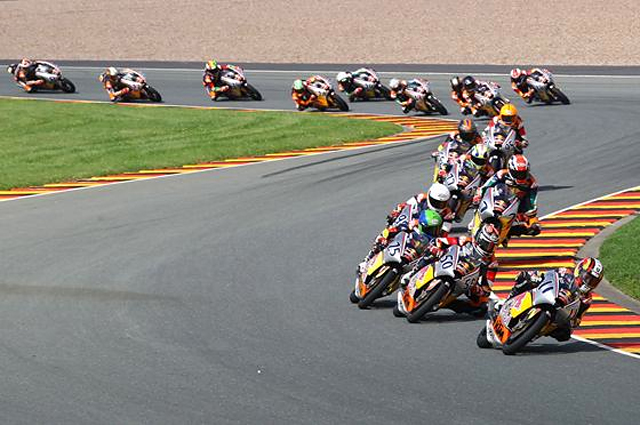 Mike Hailwood and Hugh Anderson, they were the GP winners 50 years ago at the Sachsenring in what was then East Germany.

Now it is the turn of what could be the grandsons and granddaughters of such heroes to follow their own road to stardom as competitors in the Red Bull MotoGP Rookies Cup.

In 1963 the races were held on a course laid out on public roads and Hailwood won the 500cc, 350cc and 250cc World Championship rounds while Anderson was victorious on the 125cc machines. The current start and finish straight crosses the same ground as the old grid but otherwise it is a very different world.

Racing skill is still the key though and 24 teenagers line up to see who can show the greatest ability in the two Rookies Cup races. There is no doubt that the man to beat is 17-year-old Czech Karel Hanika who has had three wins and three second places in the six races run so far this year and heads the table on 135 points.

He is chased by Jorge Martin, the 15-year-old Spaniard, on 93 and 15-year-old Italian Enea Bastianini on 65.

Hanika is a class act but just looking at the points table gives no hint of the sort of races we have already seen this season. The tall, long haired blond has had to fight hard for each point all the way to the line even though he has sat on pole at every race. Such is the nature of the Cup and the equality of the KTM Moto3 machines that nothing has been easy for him.

The clearest win of of the year came in the first race of the season when Bradley Ray dominated Race 1 in Austin. Unfortunately the 16 year old Briton slumped to 4th in the points after a disastrous weekend last time out in the Netherlands when he was knocked off in Race 1 and suffered a technical failure in Race 2. He certainly has the ability to bounce back in Germany.

There are plenty of others who can also be counted on as potential race winners. Turkish 16-year-old Toprak Razgatlioglu comes fresh from a 600 National race win at home and has already been on the Rookies Cup podium twice this year but also suffered a technical failure in Assen and lies 5th in the table.

Two teens hitting their best form are Stefano Manzi and Scott Deroue, both were right in the hunt for victory in Race 1 in Assen before sliding off. The 14-year-old Italian went on to take a superb 2nd in Race 2 while 17-year-old local hero Deroue thrilled the patriotic crowd as he also led the race only to finally cross the line 4th.

Deroue won Race 1 at the Sachsenring last year and Manzi and Deroue finished 2nd and 3rd in Race 2 which was won by Lukas Trautmann. The 17-year-old Austrian will be looking for a repeat performance as he returns to the track following a three race suspension that resulted from the start line incident in Jerez.

Top Image: Red Bull Rookies look to follow in the footsteps of greats at Sachsenring