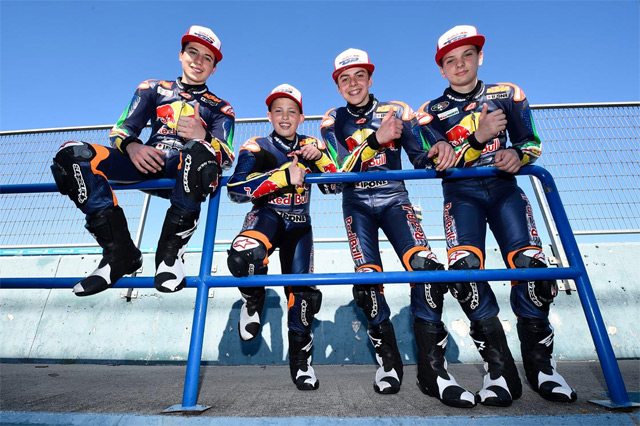 Suddenly there are just three races remaining in the Red Bull MotoGP Rookies Cup for 2015.

Back at Jerez in May the 13 race series seems to stretch out a long way but now just the single race at Misano this coming weekend and the finale pair in Aragon at the end of the month will decide the season.

Bo Bendsneyder, the 16-year-old Netherlander, already has one hand on the Cup, he made a big grab for it with double victory that first weekend in Spain, the opening salvo of a 5 win streak that set an awesome foundation for his title claim. The clear warning that; 'it aint over 'till the large lady sings', was heard by everyone when he slid off battling arch rival Fabio Di Giannantonio in race six at the Sachsenring.

That lady doesn't set her dainty feet on stage until we get back to Spain and there are still 75 points on offer. But our flying Dutchman does already have 52 points over his only viable rival, the 16-year-old Italian. If Di Giannantonio does not at least finish in front here in Italy it is likely to be all over and the only song that will matter will be 'Het Wilhelmus'.

Of course Di Giannantonio is at home and he already has two wins and four seconds to his name this season. No one else has even a mathematical chance of taking the title. Spanish 16-year-old Oscar Gutierrez lies third ahead of French 18-year-old Enzo Boulom and for them their first Cup victory is the aim with Boulom the man on a role with a fine second from Silverstone Race 2. It was Gutierrez though who beat him in the dry Race 1 when they battled for fifth.

Ayumu Sasaki, who lies fifth in the points table, already has his first win from his great wet ride two weeks ago but the first year Rookie will only be totally satisfied when he does the same in the dry and he is not at all bothered by the fact that he has to learn another new track.

The 14-year-old Japanese was in the hunt for the win that first weekend in Spain as was fellow countryman Kaito Toba. The 15-year-old is still seeking his first victory in his debut season and a couple of unlucky falls at Silverstone left him seventh in the points.

Between the two Japanese are Spaniards Marc Garcia and Raul Fernandez. Garcia, the 15-year-old, finally found the secret to qualifying on the front row in Britain when he teamed up with Bendsneyder and will likely repeat that in Misano. His 14-year-old countryman was part of that front row deal at Silverstone and he has the skills to match Garcia as they both look for their first win this weekend, they each had a third in Brno and Garcia has a second from the Sachsenring.

Remembering that home country advantage, don't forget 16-year-old Mattia Casadei, 13-year-old Omar Bonoli and 15-year-old Bruno Ieraci (pictured along with Di Giannantonio, third from the left, in the all Italian lead image). They will have the support of the fans but Italian regulations keep their youngsters off the full size race circuits until they reach thirteen so for Bonoli it is a new track.

This weekend's single Rookies Cup race can be seen live on www.redbull.tv