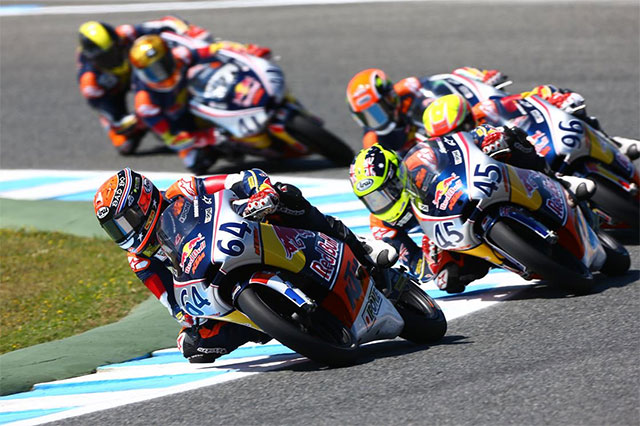 A decade of Red Bull MotoGP Rookies Cup races will conclude on September 25th in Motorland Aragon, a season that starts in Jerez this coming weekend with the first all KTM battles of the year.

Three days of testing in Jerez two weeks ago gave the 24 teenagers every opportunity to to set up their KTM RC 250 Rs and they can‰Ûªt wait for the action proper to begin.

Last season, the opening weekend in Jerez saw Bo Bendsneyder snatch a Spanish Grand Prix double victory, the beginning of a five race winning streak that not only launched his Cup winning season but made him a natural for this year‰Ûªs factory Red Bull KTM Ajo team. He now races alongside fellow ex Rookie Brad Binder who leads the Moto3 World Championship and the pair are shining examples for the current Rookies to follow.

With last year‰Ûªs Moto3 and Moto2 world titles won by ex Rookies the path to World Championship success has never been more clear and this year‰Ûªs Rookies all know what is at stake.

If the test times from two weeks ago are a reliable guide to form a double win will not be easy for anyone this season as RaÌ¼l FernÌÁndez and Ayumu Sasaki shared the identical time at the top of the leaderboard. The Spanish and Japanese 15-year-olds had some memorable battles together last year and naturally start favourites not only for Jerez but the whole season.

Red Bull MotoGP Rookies Cup gets underway this weekend at Jerez i Spain
Marc Garcia, the 16-year-old Spaniard who finished fourth, just behind Sasaki in last year‰Ûªs Cup chase, enters his third season, he has always been consistent and just needs to find that extra touch that will add to the single race victory he scored last year. He knows he must up the pace though as he was 11th quickest at the test and finished 9th and 8th at Jerez last year.

The Rookies Cup is always about new talent and the quickest of the first year Rookies at the test was Japanese 15-year-old Ai Ogura who recorded the seventh best time. These guys are all fast learners though so don‰Ûªt be surprised if the lead pack in Race 1 has a good number of newcomers embroiled in the battle.

Some take time to come to the boil though and last year it was Rory Skinner who started out slow, double 17th in Jerez, and ended the season with pole and a double podium in Aragon. The 14-year-old Scot wants to start out this year as he ended last and was sixth fastest at the test.

This weekend's Rookies Cup races can be seen live on www.redbull.tv and on TV stations around the world.