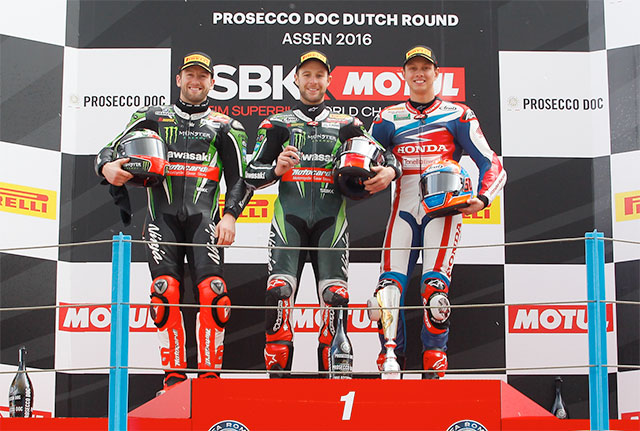 KRT rider Jonathan Rea took another incredible win in the Netherlands in Race 2 of the fourth round of the Superbike World Championship as a half wet half dry race saw tyre decisions play the key role.

Joined on the podium by teammate Tom Sykes and local hero Michael van der Mark, Race 2 was characterized by nervous glances at the sky as the riders dealt their cards.

Sunday morning initially brought better weather to the TT Circuit Assen, with the sun breaking through the clouds to give the Dutch track a crisp, clear morning. With a lower breeze after the wind caused issues on Saturday, the race looked set to be in dry conditions, before a deluge interrupted World Supersport and saw a Wet Race declared for WorldSBK.

With Sylvain Guintoli one of two riders to choose intermediate tyres the Frenchman quickly went plummeting back through the order off the line, the two Kawasaki's of Sykes and Rea took to the lead, with Chaz Davies‰Ûª Ducati and Michael van der Mark and Nicky Hayden‰Ûªs Honda's in hot pursuit. As the conditions caused quick position changes, it was Milwaukee BMW rider Josh Brookes who emerged in the lead, with the damp conditions suiting the reigning BSB Champion.

Saturday podium finisher Nicky Hayden, reigning Champion Jonathan Rea and local hero Michael van der Mark were the challengers, before Rea and Sykes were the first of the front runners to dive into the pits for dry tyres as track conditions improved, followed by Van der Mark on the next lap.

As the pack started to shuffle after the tyre changes, Pedercini rider Lucas Mahias found himself at the head of the race, with KRT pairing Rea and Sykes hunting him down, followed by van der Mark. As dry tyres became necessary, reigning Champion Rea took control of the race once again to take another win in WorldSBK and increase his Championship lead. Teammate Tom Sykes made a well-timed tyre change to come home in second and recover some earlier lost ground, and Dutch rider Michael van der Mark remembered Saturday‰Ûªs standing ovation after a crash and kept the Honda on the track to take another home podium, keeping his WorldSBK rostrum record at 75% at his home circuit.

‰ÛÏOur target this weekend was to increase our championship lead and we did that," Rea said.

"I said to Pere my crew chief before the start of the race that the track should dry out pretty fast. We have had previous experiences like that. I have no idea why I go so well at Assen. It is nothing to do with the track itself. We got a double victory but it was not like Australia where I had more pace than the rest.

"We controlled the situations this weekend when we had to, we were calm and clever when we had to be, and as a team our strength shone through to get two strong results. We got the maximum from what we could achieve here so I am super, super, happy with that. Our stars aligned this weekend and it worked out, so I am just happy," Rea concluded. 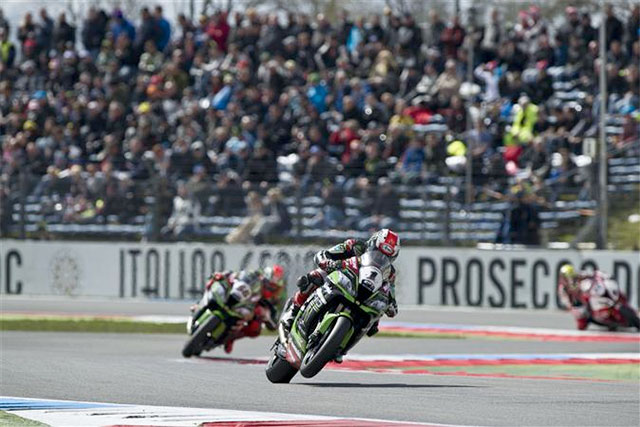 Jonathan Rea on the way to completing the double in Assen
2015 STK1000 winner Lorenzo Savadori was another superstar decision maker as the IodaRacing rider took his Aprilia to P4 and his best ever result, followed home by Ducati‰Ûªs Chaz Davies, who was the lead bike for the Borgo Panigale factory once again. Honda rider Nicky Hayden, who had been challenging for the lead in the dry, came home sixth after waiting a little too long to change to slicks, mindful of the grey skies ahead.

Alex Lowes made up ground once again to end the race in P7 on his Pata Yamaha, in front of Davide Giugliano on the second Aruba.it Ducati. Leon Camier, after giving MV Agusta their best result of P4 in Race 1, again brought home a good haul of points in P9.

Xavi ForÌ©s crossed the line to complete the top ten after an impressive showing at the start of the race, in front of front row starter Guintoli on the second Pata Yamaha YZF R1, with the points scorers completed by Roman Ramos, Lucas Mahias and the BMWs of Karel Abraham and Jordi Torres.

Josh Brookes, after leading and impressing in the difficult conditions, sadly crashed out and was unable to complete the race on his Milwaukee BMW, but will be encouraged by his incredible early pace.

WorldSBK is back on track at the mythical Autodromo Internazionale Enzo e Dino Ferrari in Imola at the end of April, for the cards to be dealt and played once again.