Racing kicks off in Horsham for KTM AJMX Championship 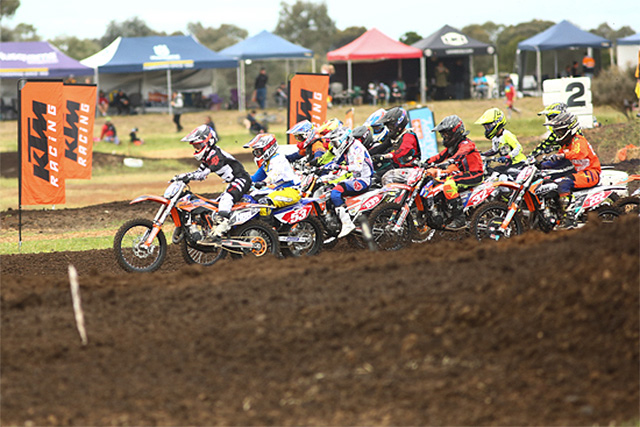 Racing has commenced on day two of the KTM Australian Junior Motocross Championship (AJMX) at Horsham in Victoria, where a selection of categories battled through their first heats, as the remaining classes took part in free practice sessions.

The circuit remained relatively untouched from the opening day, delivering challenging and technical conditions under what were clear skies for the greater portion of the day, serving up great racing in just the early stages of the week-long event.

Junior Lites 15 Years - Heat 1 and 2:
The opener of the older age group Junior Lites division was dominated by Victorian Mason Semmens, who once gained the lead, gapped the field immediately to cross the chequers with a comfortable 13-second advantage. Rhys Budd (NSW) held on for second, maintaining a constant margin over third place‰Ûªs Jack Kukas (QLD). Completing the top five was New South Wales duo Connor McNamara and Cody Cheers.

The second heat was all about John Bova from New South Wales, who after battling with rival Bailey Malkiewicz in the initial stages, set out to build a healthy lead, taking a confidence-boosting win. Making it a New South Wales podium whitewash was Tyler Darby in third, followed by Navrin Grothues (QLD) and Joshua Whitehead (NSW).

125cc 13-U15 Years - Heat 1 and 2:
In what was the first race of the day, heat one of the 125cc 13-U15 Years class saw multiple riders challenge for the lead, all coming unstuck as they tackled the slippery conditions. Kai Newbold (SA) maintained consistency to claim the win ahead of Caleb Clifton (NSW) and Liam Andrews (VIC), while Tye Jones (QLD) and Conan Forrester (WA) held on for fourth and fifth positions.

Heat two saw a thrilling battle between visiting international Meico Vettik of Estonia and New South Welshman Dante Hyam, with pair completing the seven-lap affair just half a second apart - Vettik with the advantage. The duo were followed by Corey McMahon (NSW), Alex Larwood (SA) - who was penalised for jumping on a yellow flag - and Corben Weinert (WA).

Mini Lites 12-U14 Years - Heat 1 and 2:
Alex Larwood from South Australia stole the show in heat one of the Mini Lites 12-U14 Years class, taking the win with a comfortable margin over the field. New South Welshman Blake Fox was second, setting a blitzing lap that saw him credited with the fastest time. Brad West (QLD) settled for third ahead of Matthew O‰ÛªKeefe (VIC) and Connor Rossandich (NSW).

Heat two saw Rory Fairbrother put on a show, as the New South Welshman laid down an effortless charge to the chequered flag to capture the race win. Brock Ninness (NSW) and Bailey Clancy (NSW) duked it out for the runner-up spot, but it was Ninness who proved to be faster to take second. Fourth and fifth was credited to New Zealand‰Ûªs Brodie Connolly and Victoria‰Ûªs Jacob Sweet.

Mini Lites SW 9-U12 Years - Heat 1 and 2:
Fresh off the top qualifying spot, Tasmania‰Ûªs Jett Burgess-Stevens pieced together a flawless moto to take a brilliant 23-second win at the completion of the six-lap period. Connor Towill of New South Wales maintained second, as Jasper Moon charged to third to conclude the top three. The biggest battle of the race was between Clay Burnett (SA) and Kayden Minear (WA), who wound up fourth and fifth respectively.

New South Welshman Ryder Kingsford displayed dominant form in heat two, charging to victory with a commanding 12-second advantage. Queensland‰Ûªs Jack Mather defeated New Zealand ace Cole Davies for second, as it was Jett Kipps of Victoria and New South Welshman Max Miller in the fourth and fifth positions to round out the top five.

65cc 9-U11 Years - Heat 1 and 2:
In heat one of the 65cc 9-U11 Years class, Jett Alsop of Queensland stormed to the race victory, setting the pace as the battle for second unfolded behind him between Western Australian Kayden Minear and Tasmania‰Ûªs Angus Pearce. The duo fought all the way through to the flag, as it was Minear who came out on top to claim second. Rounding out the top five was Koby Hantis (NSW) and Nate Thompson (NSW).

Heat two saw New Zealand‰Ûªs Cole Davies claim a commanding six-second win over New South Welshman Ky Woods, who settled into a comfortable second to secure the runner-up spot. Cooper Dudley (NSW) kept Queensland‰Ûªs Braden Plath at bay for the final spot inside the top three, while it was Deacon Paice of Western Australia who completed the top five.