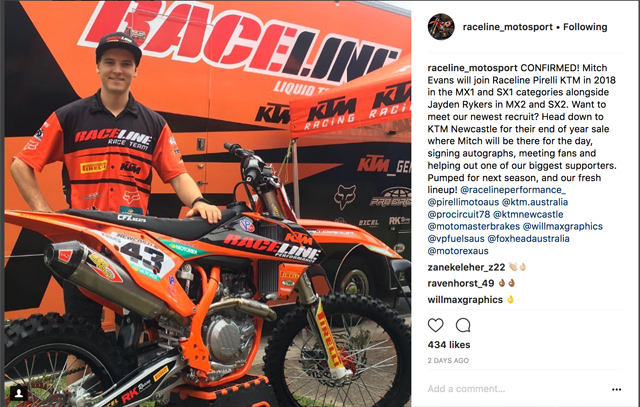 Raceline Pirelli KTM have announced their 2018 rider line up with Mitch Evans named as the teams MX1 rider while Jayden Rykers will continue his role with the KTM outfit in the SX2 class.

Evan's the 2016 MXD champion raced for the Serco Yamaha team in the MX2 and SX2 classes this season showing great form in both series, though his season was cut a little short after a nasty crash as the Aus-X open in Sydney after landing on WBR Yamaha's Aaron Tanti in a racing incident.

Raceline made their announcement via Instagram in the above post, while Evan's himself also commenting via social media his delight in joining the team and moving up to the MX1 class for the 2018 season.

"Am super excited to be racing MX1 in 2018 with the support from @raceline_motosport! Thank you to everyone who made this happen for me," Evans posted.