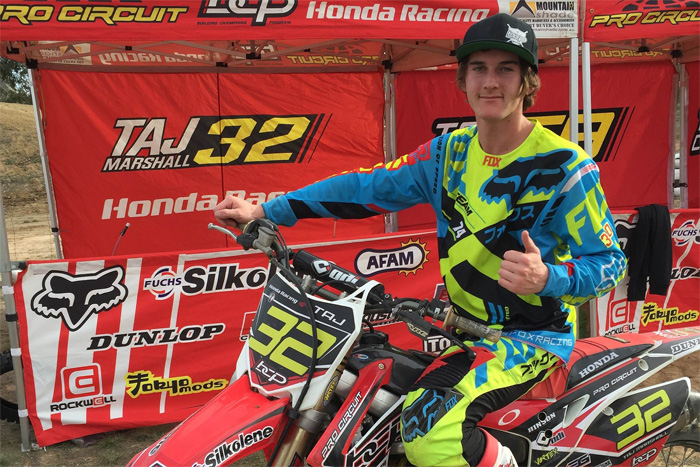 BCP Pro Circuit Honda Junior Development Team riders Taj Marshall and Trent Collins found themselves at the pointy end of the field throughout most of the day during this weekend‰Ûªs Round 3 of the Victorian Junior State MX Championships.

The event held at Ararat in Western Victoria hosted some of the best junior MX racers in Australia as they battled amongst themselves for valuable championship points.

The A grade 250cc star studded field got underway in moto one with a holeshot from current National Champion Taj Marshall. Marshall held the lead for the first half of the race and looked to have everything under control when landing off a jump the bike cut out and Marshall rolled to the side of the track. Fortunately the bike restarted first kick and he entered the track back in fifth place where he would stay for the remaining five minutes of the race.

A three way battle between current state champion Cody Dyce, former World Junior Champion Caleb Grothues and BCP Pro Circuit Honda rider Trent Collins erupted late in Moto 1 after Collins charged from outside of the top five reeling the pair in. Less than point five of a second separated the top three as they crossed the line with Collins in third place.

Moto 2 of the A grade 250 got underway with Trent Collins slotting into the lead by the end of lap one and from there the kiwi stretched out a seven second lead over Dyce and Grothues. With just a couple of laps to go Collins had a front wheel washout in a corner which dropped him back to third place once the chequered flag was waved. A second turn crash for Taj Marshall saw the number 32 Honda rider charge from last place up to ninth in the dusty conditions.

The final 250 moto of the day saw Taj Marshall‰Ûªs second holeshot of the day. Marshall lead from wire to wire and took a comfortable win on the tricky hard pack surface.

‰ÛÏI‰Ûªm happy to get that first win under my belt,‰Û