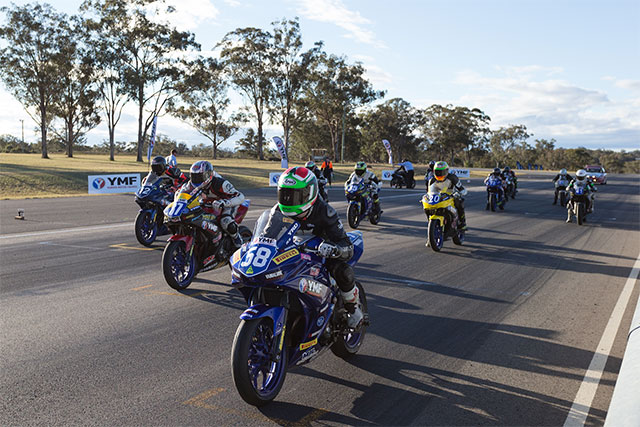 This weekend will prove crucial for competitors of the newly formed championship YMF R3 Cup class, as they head to the world renowned Phillip Island Grand Prix Circuit for Round 4 of the YMF R3 Cup alongside the Victorian Road Racing Championship on August 26-28.

The YMF R3 Cup is a national class that was initiated at the beginning of 2016 to encourage entry levels riders to participate in a cost effective and hassle free introduction to road racing, and has taken Australia by storm producing some brilliant and tight racing this season so far.

With three rounds down, and two to go it has never been a better time than now for competitors to put their front foot forward with a Championship on the line. The winner looking to take home the first YMF R3 Cup Championship title. As well as a YZF-R6 machine, an invite to the YRD program for 2017, a full Akrapovic Racing Line Muffler system and a leased Mupo suspension system.

For the top three current Championship points leaders, YZF-R3 mounted Callum Alderson, Zac Levy and Hunter Ford sitting first, second and third respectively. The pressure is on to bring their machine‰Ûªs across the line in the number one position as they share below.

‰ÛÏI can't remember the last time I had a feeling like this! I've never really had a championship lead, only ever been 2nd or 3rd, so this is a whole new feeling, but I've come on really strong lately as these R3's are such a great package, being able to gel with the little 300's is so easy,‰Û