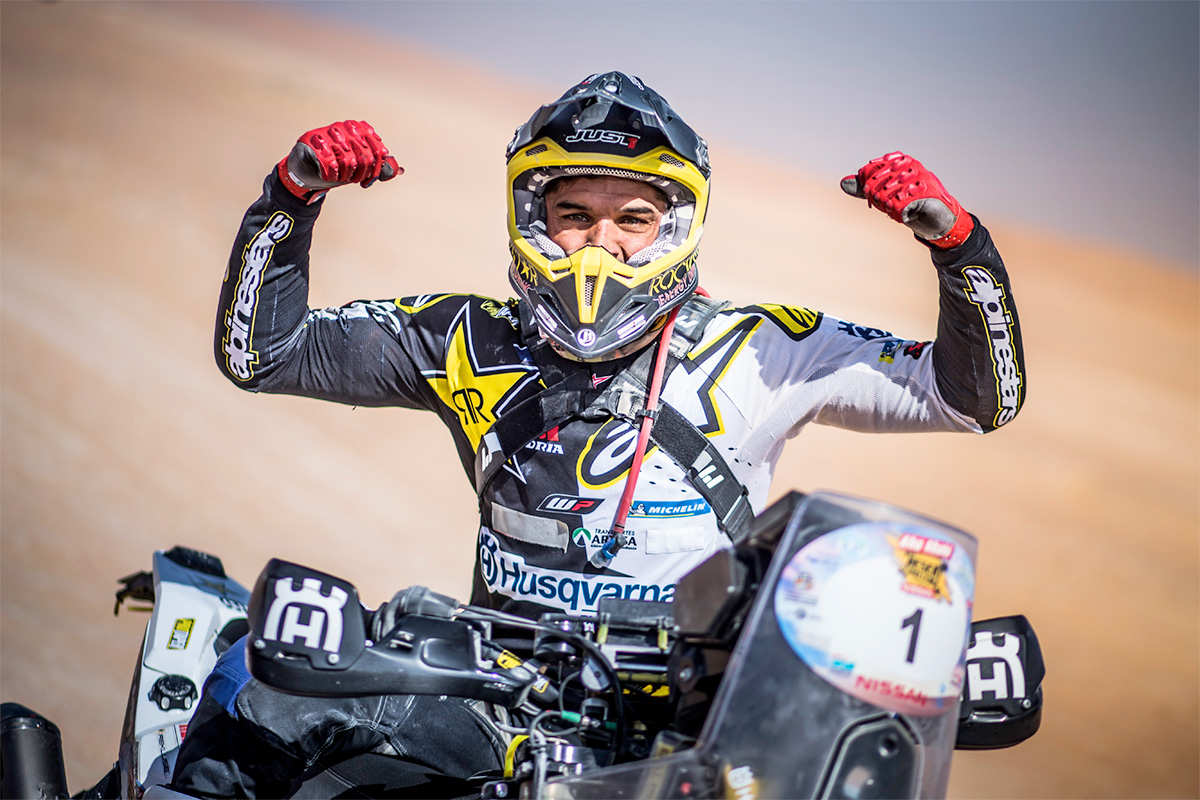 Rockstar Energy Husqvarna Factory Racing‰Ûªs Pablo Quintanilla claimed first blood in his Cross-Country Rallies World Championship title dfence with victory in the Abu Dhabi Desert Challenge
Delivering the goods when it mattered the most, Pablo Quintanilla has earned victory at the opening round of the 2018 FIM Cross Country Rallies World Championship ‰ÛÒ the Abu Dhabi Desert Challenge in the United Arab Emirates.

Remaining focused on his well calculated plan of attack, Quintanilla put in the fifth best time on Thursday‰Ûªs fifth and final stage. Retaining his lead in the overall classification, the Husqvarna rider wrapped up the 2018 Abu Dhabi Desert Challenge five minutes and 11 seconds ahead of his nearest rival.

Reigning Dakar Champion Matthias Walkner won the finla stage to claim fourth overall ahead of Kevin Benavides and Sam Sunderland, in the overall Sunderland finished second while Benavides rounded out the podium. Australian Toby Price was fourth on stage and rebounded from a torid start of the event to come home in seventh overall. 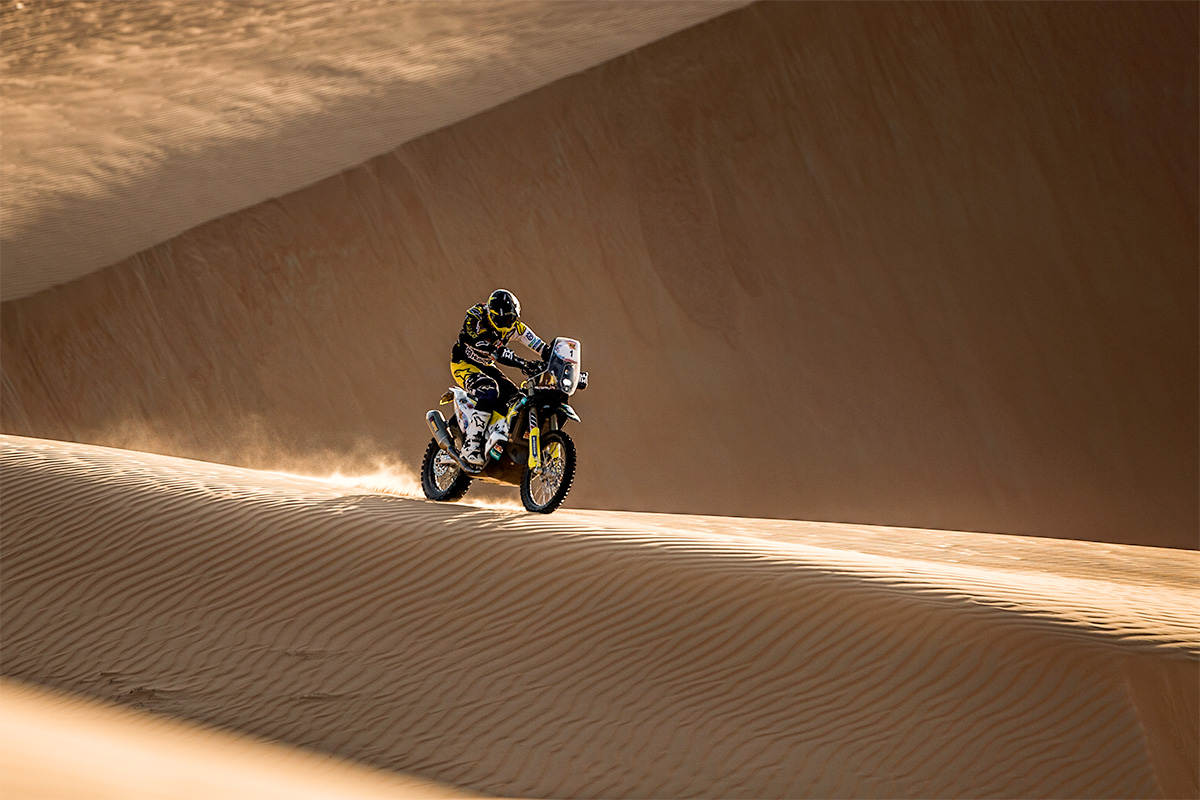 Pablo Quintanilla ended the Abu Dhabi Desert Challenge with a slender 5 minute and:11 second win over Sam Sunderland..
Racing through the heat, long stages and demanding off-piste sections of the Desert Challenge, in starting the new season in the best possible way, Pablo Quintanilla now looks ahead to what promises to be an exciting season of international rally competition.

‰ÛÏI‰Ûªm really happy to get the win in Abu Dhabi and it‰Ûªs been a fantastic start to the new season," Quintanilla enthused. "This year‰Ûªs Desert Challenge has been a really tough race from the beginning until the end. During these last few days we battled through extreme heat and the massive sand dunes of the area.

"There were many high-speed tracks and lots of off-piste sections where navigation was crucial. We also had some great fights with my main competitors and I‰Ûªm happy I came out on top. I would like to thank all the Rockstar Energy Husqvarna Factory Racing team for the amazing job they did during this week. They are always by my side and this helps me achieve the results I want. It feels good to start the season with a victory and I‰Ûªm looking forward to the events to come.‰Û 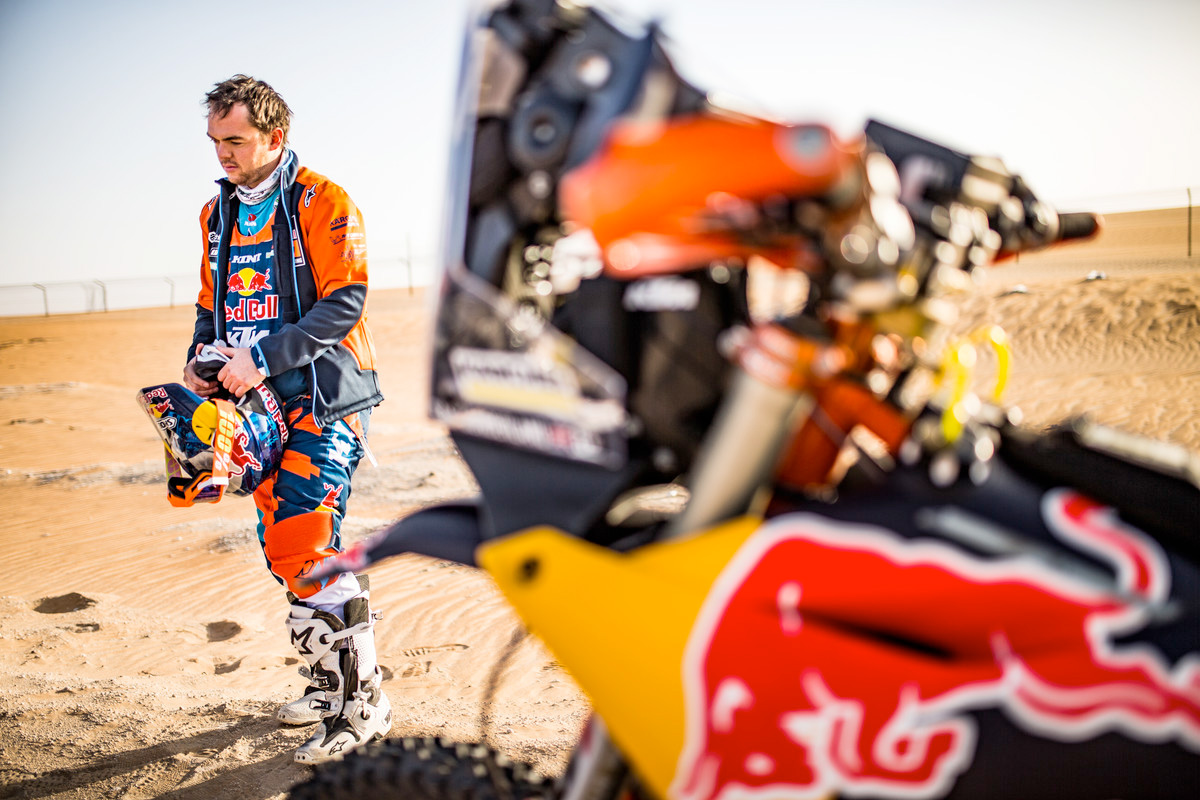 Matthias Walkner won the final stage but was unable to finish on the podium in the overall, the Dakar Champion finished fourth. Photo: Marcin Kin
Sam Sunderland led the first group away and rode at the front for the initial half of the final stage. It was Matthias Walkner however that took the lead after the refuelling point, fighting a close battle with rival Kevin Benavides for the win. With the lead changing multiple times over the last 50km, it was the Austrian Walkner who eventually crossed the line first, just a couple of bike lengths ahead.

With times being so tight in the overall standings, Walkner‰Ûªs win wasn‰Ûªt quite enough for him to finish the rally on the podium. Despite this, the reigning Dakar Champion was still happy with the result and his performance in the Liwa Desert.

"The final day‰Ûªs racing has been really fun ‰ÛÒ I‰Ûªm happy to take the stage win after such a good fight," Walkner said. "Unfortunately, I wasn‰Ûªt able to make up enough time to get onto the podium today, but in general the rally has gone really well. The mass-start this morning had everyone riding together for the first 100km, there was a lot of dust and it was hard to pull away.

"On the second half of the stage it opened up a lot and I was able to get out in front. Kevin Benavides and myself had a great battle over the last 50km, riding together and swapping the lead many times. I managed to cross the line three metres or so ahead but of course it wasn‰Ûªt enough to steal third overall. I came into the rally hoping for a top-five, so fourth overall whilst feeling very comfortable on the bike is not a bad result at all. Things look good for the rest of the year.‰Û 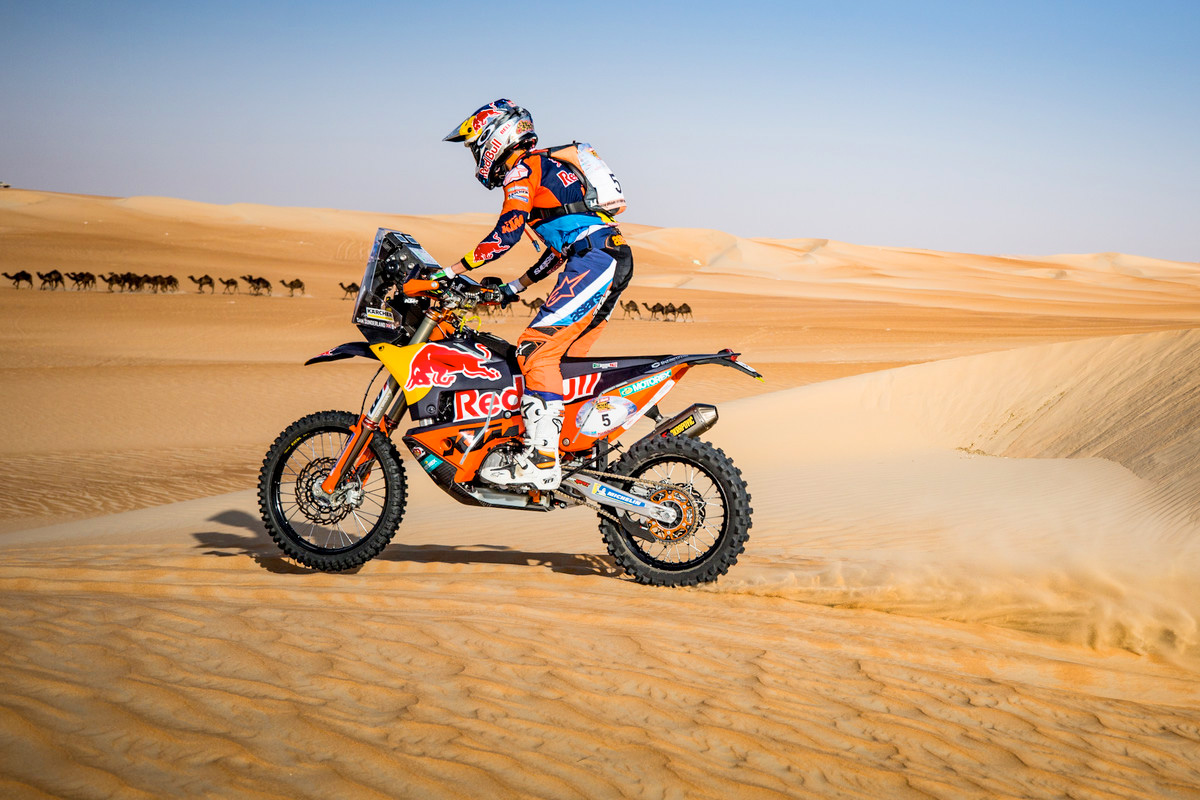 Red Bul KTM Factory Racing's Sam Sunderland finished just over five minutes behind Pablo Quintanilla for second overall. Photo: Marcin Kin
Keeping a fast and consistent pace on the final stage, whilst staying out of trouble, was enough for Sam Sunderland to retain his second place in the event standings. Missing out on the overall victory by just five-minutes after racing for over 1,300km is a great result for the Brit. Especially after a crash on stage four that resulted in some damage to his bike.

"Second overall, especially after my crash at the Dakar is a really good result," Sunderland said. "It has felt great to be back on my bike and racing again. I‰Ûªm a little disappointed with how the rally has gone, with no prologue to set the starting order it was always going to be difficult to stay ahead.

"The mass-start today went well but riding in such a big group can be dangerous so I just tried to stay out of trouble and not make any mistakes. The bike and the team have been perfect throughout the rally, and apart from my mistake on yesterday‰Ûªs stage my riding and navigation have been good. It‰Ûªs encouraging and so I look forward to the next race and I‰Ûªll try to go one better.‰Û 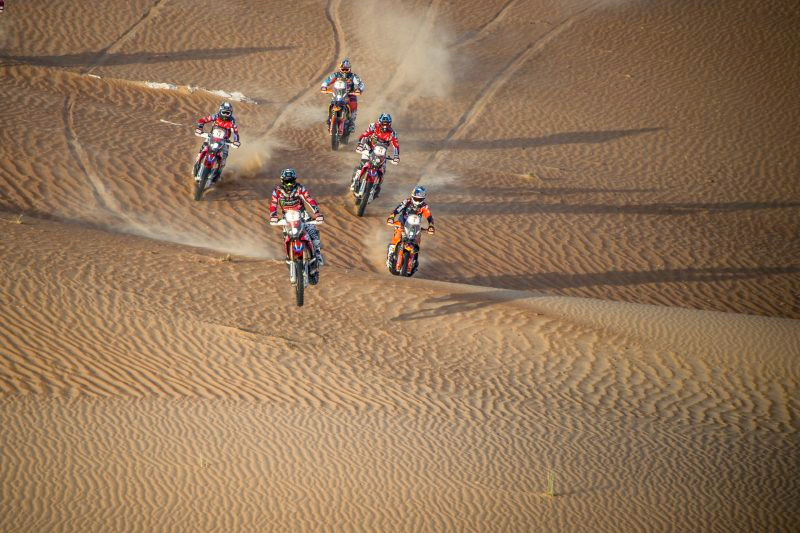 Kevin Benavides lead a strong Monster Energy Honda Team home with second on the final stage and third overall. Photo: Edoardo Bauer
It was a hard-fought third place for Kevin Benavides, who battled right up until the final kilometre of the rally. Benavides finished hot on the heels of the stage‰Ûªs eventual winner Matthias Walkner to secure his place on the final prize winners‰Ûª platform.

"I‰Ûªve finished third in Abu Dhabi. I think it's a good start to the championship," Benavides said. "Today we had a motocross-type and over the final 60 kilometres we had a tough battle to decide the stage. I defended my third place very well. I'm happy because I think the speed and pace I had in the race were very good. The sensations aboard the bike were very good too and that leaves me very satisfied. It is the start of the championship, a lot is still to come, but we will work harder to continue improving and that will pay off with victories in the coming races." 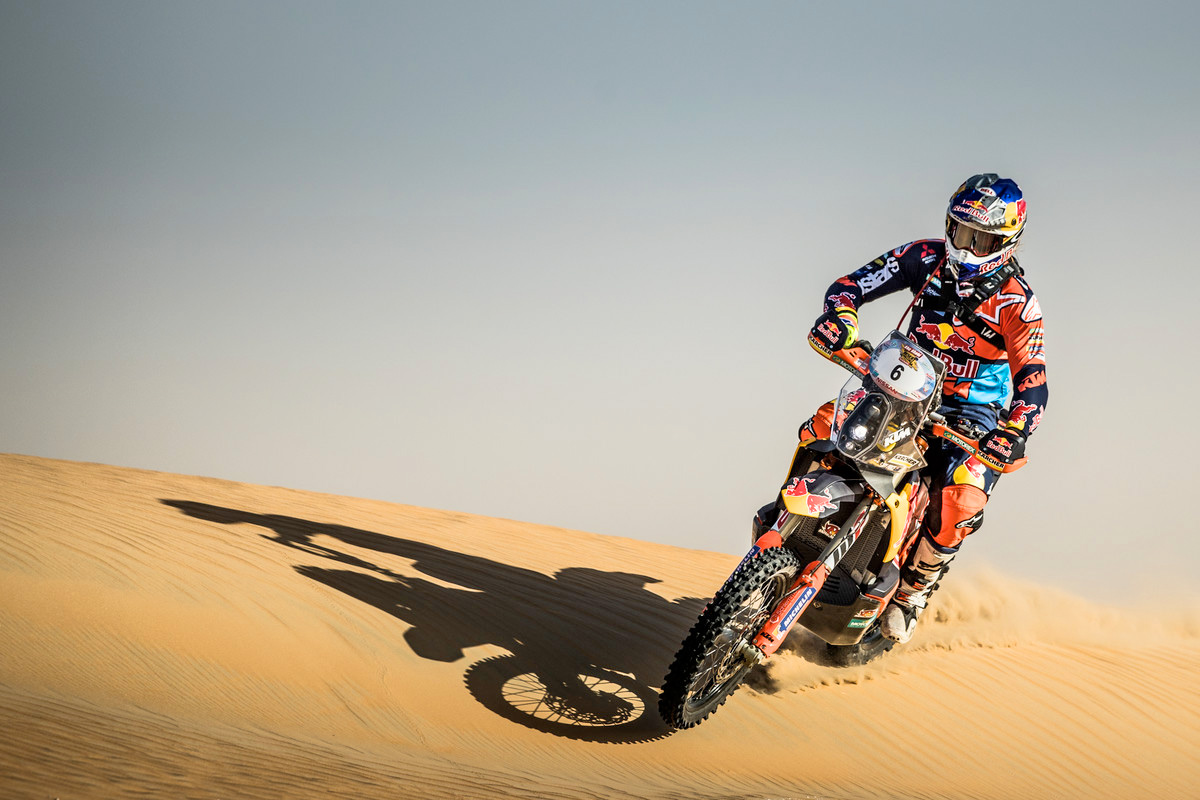 After a tough start Toby Price found his feet in the final stages and rebounded to finish seventh overall. Photo: Marcin Kin
A crash on stage two that resulted in a damaged fuel-line put Toby Price on the back foot for the remainder of the rally. Despite the set-back, the Australian pressed on, posting some excellent stage times even while riding injured. A strong fourth on the final stage was enough to move Price one place higher in the standings to seventh.