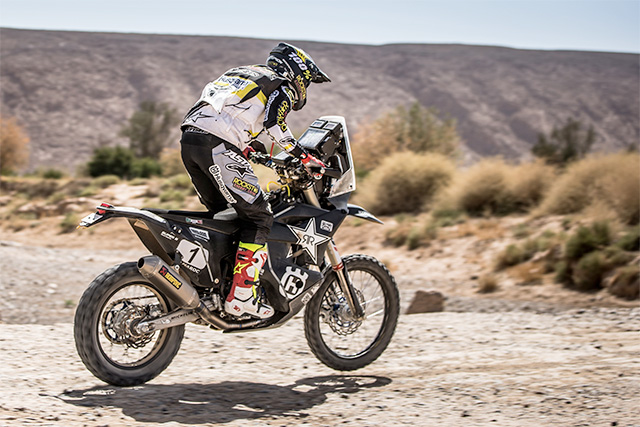 Rockstar Energy Husqvarna Factory Racing rider Pablo Quintanilla has won the 2017 FIM Cross-Country Rallies World Championship at the final round of the series in Morocco.
Successfully defending the title he won in 2016, the FR 450 Rally mounted rider wrapped up the 2017 OiLibya Morocco Rally with a top six result in the event‰Ûªs final overall standings.
Putting in one more solid performance on the final stage in the dunes of Morocco, Pablo posted the fourth fastest time in the first 163km-long timed special stage to go on and finish the event with the sixth best time in the short final special. With race organisers opting to re-instate a 20-minute penalty handed to Pablo on day two, the Chilean rider wrapped up the 2017 Morocco Rally with sixth in the event‰Ûªs final standings.
Collecting the points needed to secure the 2017 FIM Cross-Country Rallies World Championship, Pablo has secured a second consecutive rally championship for the Rockstar Energy Husqvarna Factory Racing team.
‰ÛÏI‰Ûªm over the moon with securing this title," Quintanilla said. "This year‰Ûªs Morocco Rally has been a tough one and with all the incidents on day two I had to dig really deep to defend my championship. I did my best to remain focused until the end as my main goal was to be world champion again. Everything went well and I never lost my focus. Overall, I felt very strong racing here in Morocco. I felt strong with my navigation and the bike, and this is very important for the coming Dakar Rally. I just want to thank all the members of the Rockstar Energy Husqvarna team for their hard work and dedication. We‰Ûªve all worked really hard during the season and this title is the best reward for all the sacrifices.‰Û