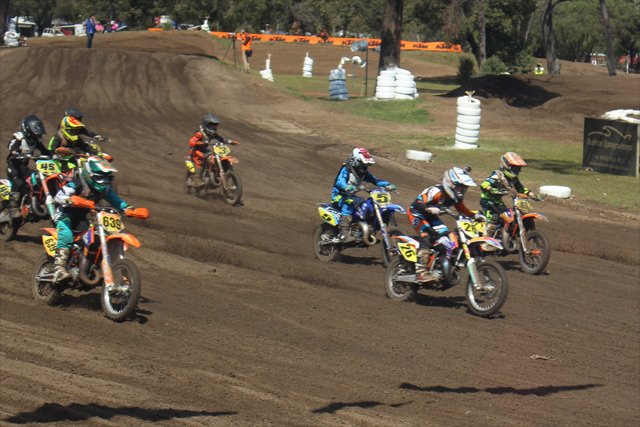 Yesterday‰Ûªs front-runners have this morning proved that their form is no fluke, as qualifying heats continued at the 2015 KTM Australian Junior Motocross Championship in Bunbury today.

With Western Australia once again dishing out ideal weather for racing, juniors took to the sandy circuit once again this morning, with the third and fourth lot of qualifying heats kick starting the days proceedings.

From the minute heat one of the 100cc to 150cc 2-stroke 13-u15 years class hit the track, onlookers were treated as Husqvarna Junior Racing Team‰Ûªs Callum Norton and local Caleb Grothues went head to head for the entire moto. Despite Norton leading for all of four laps, Grothues had the stamina required to secure the race one win, ahead of Norton in second and Regan Duffy in third.

With the opening moto setting the benchmark for the day, when the second heat of 100cc to 150cc 2-stroke 13-u15 years riders lined up, the excitement could be felt as spectators awaited the gate drop.

When racing got underway it was KTM mounted Mitchell Outram who secured the holeshot, followed by Mat Fabry who slotted in to second position. Despite Fabry challenging Outram for the lead for a period of time, Outram crossed the line after the ten-minute race victorious, followed by Fabry in second and Bailey Malkiewicz in third.

When bikes headed out for heat one in the 85cc 2-stroke / 150cc 4-stroke std wheel 9-u12 year class, Billy Payne‰Ûªs KTM was the first bike through turn one, and set himself up to hold on to the early race lead. However it wasn‰Ûªt long before Payne came under fire from Yamaha‰Ûªs Levi Rogers ‰ÛÒ Rogers able to get the job done, executing a pass on the number 22 machine, and moving in to the race lead.

Despite Rogers looking comfortable out in front, the young gun went down in the final lap of the moto, handing Payne a clear track to take the heat one race win, ahead of Deegan Mancinelli in second, and Tyran Tomich in third.

When the second lot of 85cc 2-stroke / 150cc 4-stroke std wheel 9-u12 riders headed out for the final qualifying heat of the morning, all eyes were on the KTM machine of Jett Lawrence who was looking to back up his outstanding form from yesterday.

When the five-second board dropped, and bikes launched on to the track it was a KTM machine, but that of Cody Chittick who took the early race lead, with Blake Hollis and Lawrence slotting in to second and third behind him.

After only one lap however, heat two of the 85cc 2-stroke / 150cc 4-stroke std wheel 9-u12 class was red-flagged simply as a safety precaution, with a crash blocking the race line in turn one.

When heat two was restarted, Blake Hollis launched in to the early race lead before Lawrence took control of the moto, and began to check out on the 85cc 2-stroke / 150cc 4-stroke std wheel 9-u12 field.

With Lawrence well and truly out in front, Alex Larwood made his way in to second position, while Chittick followed closely behind in third.

When the last lapboard came out on heat two, the race order didn‰Ûªt change much for what they went out in - Lawrence taking another race win to add to his 2015 KTM AJMX campaign, followed by Larwood in second, and Western Australia‰Ûªs Liam Atkinson in third.

Riders, teams and parents will now begin preparations for the first lot of AJMX finals, which kick off this afternoon.

For a complete and more detailed list of results from the qualifying heats from this morning at the KTM Australian Junior Motocross Championship in Bunbury, CLICK HERE