Toby Price has won the penultimate stage of the 2018 Dakar Rally. His victory ensures he maintains his third-place position in the provisional overall standings, just over five minutes behind the runner-up Kevin Benavides.

Third on today‰Ûªs stage, Antoine Meo moves up to fourth overall. Matthias Walkner, who rode to a safe fourth place today, retains his lead in the overall rankings.

The longest of the rally, stage 13 proved a real test for the competitors. Comprising 483km of liaison with a two-part 424km timed special, the day required supreme endurance from the riders in order to get to the finish both quickly and safely. With the route including a difficult mixture of terrain, riders had to decide whether to push or play it safe. 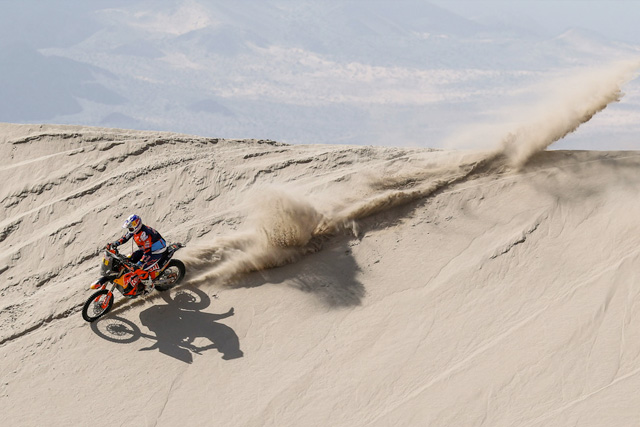 Toby Price took his second stage win in a row and now sits 27 minutes off the lead with one stage remaining. Credit: PhotosDakar.com
One rider who had little choice but to push was Toby Price. After losing time on stage 10 through a navigation error, Price had to take every opportunity he could to make up time on the leaders. With today‰Ûªs win, Price closes in on second-placed Kevin Benavides, but still trails his team-mate and leader of the rally Matthias Walkner by over 27 minutes with one stage remaining.

"That was a great stage, I was leading from the front and it was really good fun," Price enthused. "The tracks were fast, and rough in places so I pushed on as much as I could in those sections. Navigation wasn‰Ûªt too difficult today, I made a couple of mistakes along the way but nothing huge. There were a lot of speed zones so you had to be careful not to overdo it there, but I did what I set out to do and won the stage. It would have been nice to take a little bit more time off Kevin (Benavides) in front, but there‰Ûªs still one day left. If you‰Ûªd told me six weeks ago I‰Ûªd be here fighting for the podium I would have laughed at you. I‰Ûªm really happy with how things have gone so far and I‰Ûªll see what I can do tomorrow.‰Û 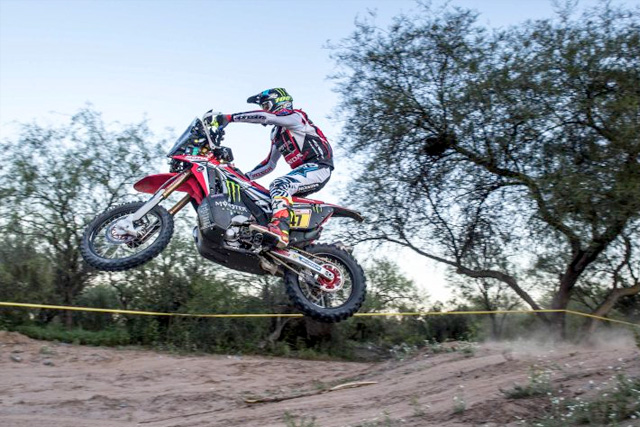 "Today I rode a good stage, which was hard but where I had a lot of fun on the sand tracks," Benavides said. "I had a minor fall but I pushed hard and was able to take some time back the leader. Tomorrow I will go out and try to ride an intelligent race. We are going to try to take it carefully because there are several dangers and you can‰Ûªt mess around." 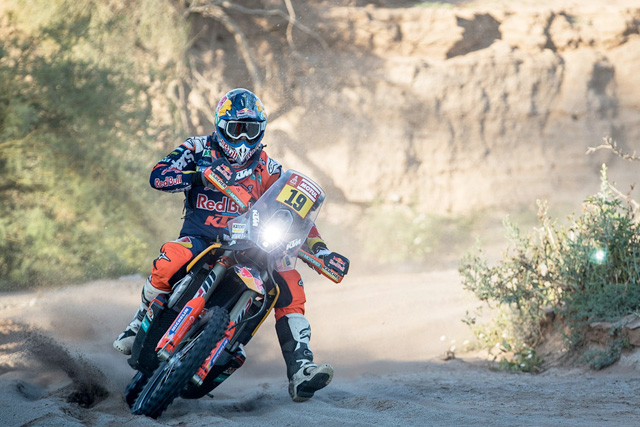 Antoine Meo finisehd 40 seconds back from Benavides in third and moved up to 4th in the standings, 50 minutes down on the leader. Credit: PhotosDakar.com
After leading the stage early on, Antoine Meo was in a close battle for the runner-up position for the rest of the stage. Finally crossing the line in third place, Meo was pleased with his result. The Frenchman now moves up to fourth in the provisional standings, 50 minutes down on the leader.

‰ÛÏToday‰Ûªs stage was good fun," Meo said. "I tried everything I could to catch Toby, but he was on the gas today. The last part of the stage was really fast and I eased off a little because a mistake there could have been very scary. I‰Ûªm happy with how the day went, the result moves me up to fourth in the standings and that is what I was aiming for today. Now we just have one more day to ride so I‰Ûªll do my best and hopefully get a good, safe finish.‰Û 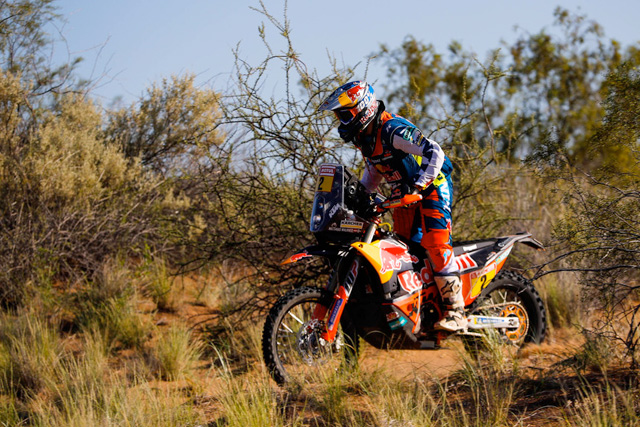 "That was a really long day today. The guys at the front are pushing really hard and I‰Ûªm feeling a little nervous so my aim is just to take things steady and get to the line safely," Walkner said. "It was a really fast stage and just a small mistake could cause a big crash. I have got a 20-minute gap over the guys behind but even that amount of time can disappear easily if you get lost or have a problem with the bike. Tomorrow we still have 120km to race and anything can happen. I‰Ûªll start thinking about the win when I eventually cross the finish line tomorrow.‰Û 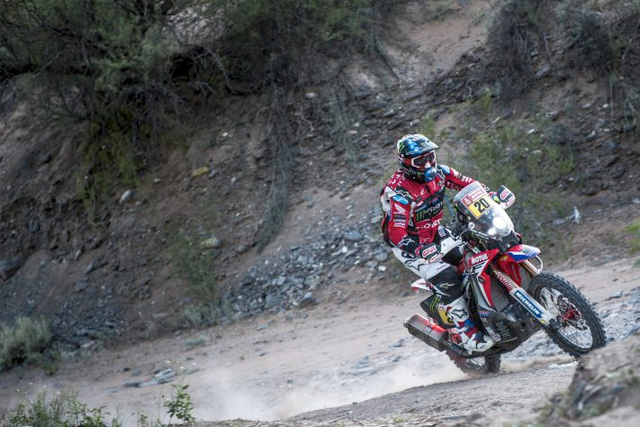 Sad news for Ricky Brabec with the American being forced to withdraw due to electrical issues one stage from the end, he was in 6th overall.
Putting in yet another consistent stage performance in South America, Yamalube Yamaha Official Rally Team rider Rodney Faggotter has moved up to 16th in the provisional overall standings after placing 21st on today's stage. With just one stage still to be contested, the experienced Aussie racer is now looking to wrap up this extremely demanding event on a positive note.

"It's been a very long day with more than 14 hours on the bike," Rod said. " There were two separate timed specials with a long ride section in between. I started quite steady in the first part. There were some sections with deep sand and just tried to remain fast without making mistakes. Then the second timed special was pretty fast. We were going 150km/h so we all had to stay focused on the road ahead and keep it on two wheels. Overall, it's been a good day for me and I've managed to move up a couple of spots in the overall. I'm 16th overall now and I'm looking forward to bringing it home tomorrow."

Aussie Scott Briknell finished 63rd on today's penultimate stage and looks on track to complete his first Dakar, he now sits 60th in the overall standings. 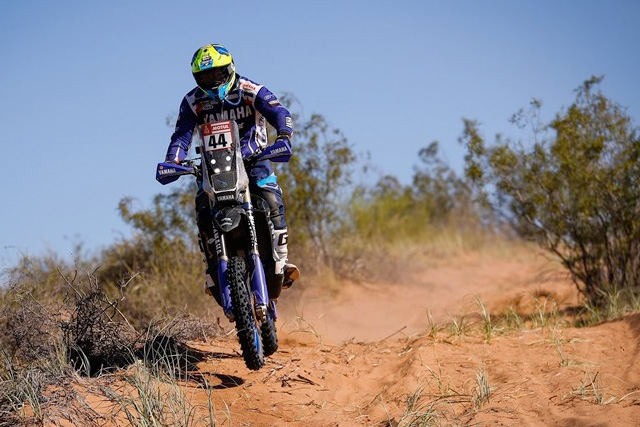 Rod Faggotter remains consistent with Yamaha's last man standing coming home in 21st. He is now up to 16th in the overal
Tomorrow‰Ûªs stage 14 marks the end of the 2018 Dakar Rally. Although short at only 286km in total, the stage will still prove difficult for competitors. With a technical timed special crossing approximately 30 rivers on route, the stage could still turn in a few surprises for the top runners. Riders will have to focus right till the finish line if they are to successfully complete this 40th edition of the rally.