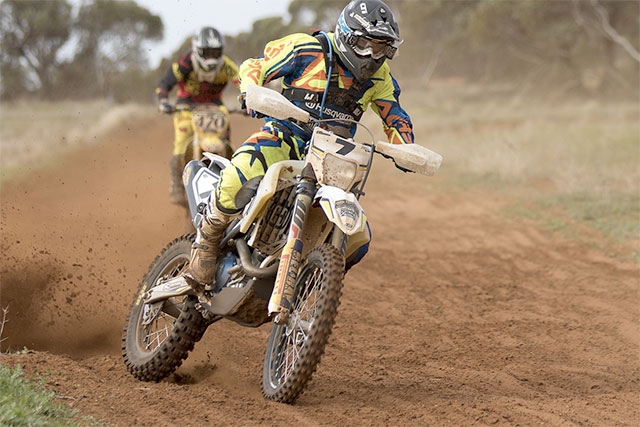 Husqvarna Enduro Racing Team riders Glenn Kearney and Lachy Stanford featured prominently in the premier class of the weekend‰Ûªs high-profile Hattah Desert race near Mildura - one of the toughest in recent years.

Team boss Kearney renewed acquaintances with Husqvarna‰Ûªs FE 501, the bike he campaigned during last year's AORC, and took a podium finish in the Premier Over-450 cc four stroke class - behind outright victors Tye Simmonds and Daniel Sanders - on his way to finishing fourth overall.

Currently holding second place outright in the AORC, Lachy Stanford found it wasn't quite as easy to keep pace with the boss in the desert, finishing one spot behind Kearney in the big bores class (fourth), and two spots back on overall classification (sixth).

‰ÛÏI was a little bit off the pace that the KTM boys had up front, but I was fairly solid and I stayed off the ground all day so I'm happy," Kearney said. "Triggy went out on the last lap too so that bumped me up to fourth, but it was a really hard day the way the track cut out with the moisture that was in it.

"It was good to get the third in the 500s. It‰Ûªs obviously the main class with all the boys in there. The bike was awesome and Christian and Dave and Kevvie did a great job in the pits. The fuel stops were flawless, and we had Amy and Chrystal out on the track with radios and pitboards, so everyone was well informed, it was a good day. 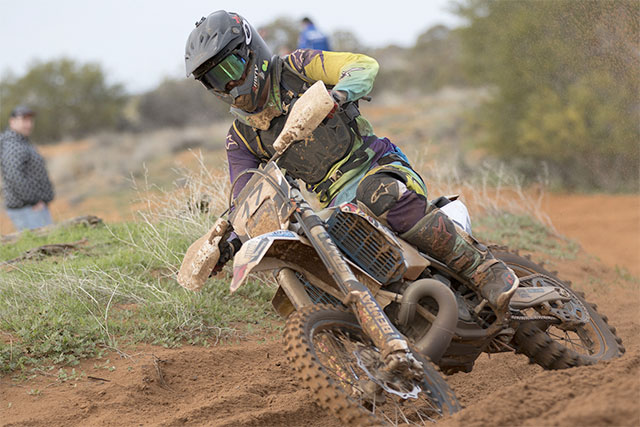 18-year-old Lyndon Snodgrass was the only 2-stroke to finish in the top ten
Despite a big crash Lachy Stanford still found the day fun.

‰ÛÏIt‰Ûªs the same old Hattah, you get to the third lap and think it's pretty easy because there aren't many bumps, but then it goes downhill fast from there, and wears you out," Stanford explained.

"I had one really big crash around third or fourth gear in the whoops, I think there was a tree root in the whoop, and it just spat me from side to side, and I had a big cartwheel in the sand. But I got going all right and that was my only drama.

"The FE501 is just insane in the desert, it‰Ûªs just got that much power the way the boys have set it up, it's just awesome fun to ride out here. I love passing people down the straights, just having more power than everyone else. Christian has been with us here all week doing testing and helping us out, so it's been a good week down in Mildura. I saw Glenn at the start, after I passed a couple of people, but Jacob Smith was ahead of us, and Glenn got around him and took off. That was the last I saw of him! But good work to him, he‰Ûªs a tough, fit little bugger! I got to have a bit of fun with Snodgrass as well, he is a really good sand rider and I was following him for a bit. He was riding really well.‰Û