Practice Done And Dusted in Tasmania 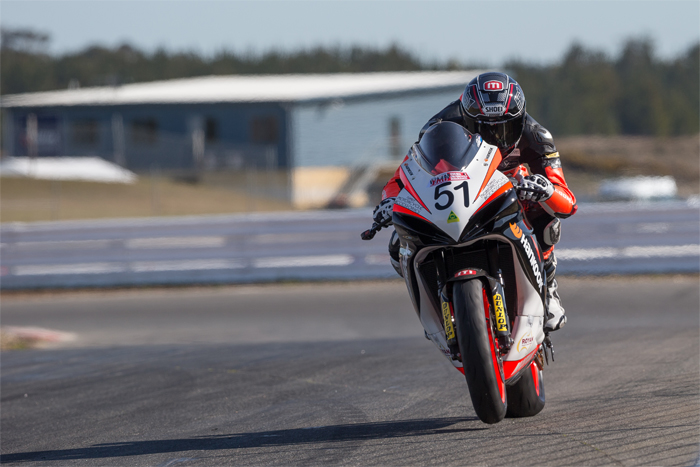 Tasmania was basked in sunshine on Friday as competitors took to Symmons Plains for the day of Practice at the fourth round of the 2015 Yamaha Motor Finance Australian Superbike Championship presented by Motul Pirelli.

Despite the chilly breeze, spectators including groups of school children, media including WIN News and Southern Cross News, and a large contingent of riders all soaked in the opening day of the event.

Each class competing at the event this were each given three practice sessions, with the Superbike and Supersport sessions lasting 25 minutes and the Pother classes all taking part in 15-minute hit-outs.

In the opening session it was series leader Mike Jones (Australian Outdoor Living ‰ÛÒ Cube Racing Team) who rode his Kawasaki to the fastest time of 56.008.

That time was .291 of a second faster than teammate Ben Henry, with Yamaha rider Daniel Falzon (JD Racing) clocking the third fastest time with a 56.333.

Henry claimed the third fastest time, Ryan Hampton (Next Gen Motorsports) took his BMW to the fourth fastest time as he did in the opening session, while local hero Brett Simmonds piloted his Yamaha to the fifth fastest time.

In the third session it was again Jones on top ‰ÛÒ his 54.579 only slightly quicker than Falzon‰Ûªs 54.880. Hampton, Henry, and Simmonds rounded out the top five.

To hear from Mike Jones after Practice CLICK Plau.

The opening session for Supersport saw Brayden Elliott (Hankook Tyres Australia) power his Suzuki to a fastest lap time of 57.807 on lap 20 of 22.

In the second session it was again Elliott from Burns ‰ÛÒ both riders shaving more than half a second off their opening session times, while Lambert, Quinn and Thyron Van Vuuren (GB Racing) rounded out the top five.

Elliott posted his best time for the day in the final session ‰ÛÒ clocking in at 57.219, while Burns also looked comfortable with a 57.653.

Quinn, Lambert and Coote rounded out the top-five.

Ted Collins (Magnum Welders) took honours in the opening practice session when we managed a 1:05.012 on the last of his 12-laps in the session.

Houghton upped the ante in the final session posting a scorching 1:03.941 with Collins, Jack Mahaffy (JR Racing) Bramich and Barton rounding out the top-five.

Hall was again at the front in session two, while series points leader Michelle Marais (SP Racing) clocked her fastest time for the day with a 1:13.060 and Lanyon also looking the goods.

Scott Campbell (Wally‰Ûªs Wonderful World) had the fastest time for the day with a 1:01.596 aboard his Honda VFR 750, while Dave McCullagh (DEMRL Transport) finished second fastest overall with a 1:02.503.

Peter Cameron (Blyer Lawyers) steered his Suzuki into third after clocking a 1:05.927 in session two.

Andrew Blackberry (Engineering Solutions Tasmania) had the fastest lap in the class across the three sessions with a 1:08.326 in the final session, with Cody Travers (1:08.780) and Craig Johnston (1:12.538) rounding out the top-three.

For a full list of results from each session, head to www.asbk.com.au