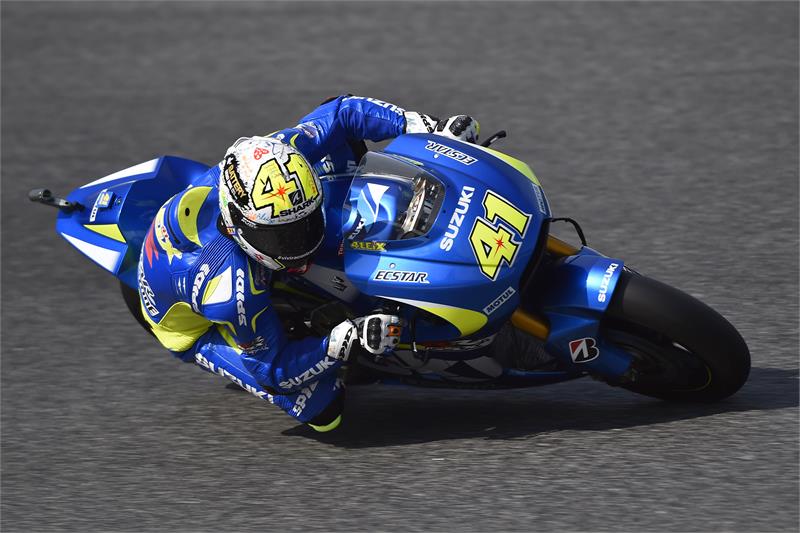 Following last weekend‰Ûªs GP of Catalunya, Team SUZUKI ECSTAR moved to AlcaÌ±iz this week for two days of private testing that proved very useful to continue the development of the Factory GSX-RR machines.

Both Aleix Espargaro and Maverick ViÌ±ales tested the latest engine specifications yesterday and today that were introduced in Barcelona, focusing their job in the finalisation of the electronics. The team also went through the information that had been collected during the races so far in order to analyse them and to find solutions to improve and move the team forward in 2015.

Both riders also tried a new fairing, as well as some different set-ups that could better-suit the new power-delivery of the new engines.

Aragon gave Espargaro and ViÌ±ales the chance to prepare for the race there at the end of September ‰ÛÒ although too-early to make any race simulations at this stage - but both riders gained a better-feeling with the characteristics of the circuit and made some start-tests.

‰ÛÏAfter the GP of Catalunya we are at about one-third into the season and it was important for us to consolidate the early outcomes that we have had in the first seven races. It was important for us to better-understand some aspects of our machines and to work developing them without the pressure of a race weekend." Team Manager Davide Brivio said.

‰ÛÏHere in Aragon we‰Ûªve had a positive test that has given us important feedback: After the introduction of the new engine specs we needed to finalise the electronics and to improve the behaviour of the frame and suspension to be even-more competitive. Both riders did a great amount of work over these past two days and our engineers have had important feedback to work on. The result we had in Barcelona ‰ÛÒ first and second in qualifying, with ViÌ±ales in sixth place after the race ‰ÛÒ is a push for all of us to put even-more effort-in because we see that some positive results are coming.

‰ÛÏWe have still a lot to do to get closer to the top teams; therefore we need to exploit all the chances that we have to test and try new things. I think we are doing a good job and we look positively to the next race in Assen.‰Û