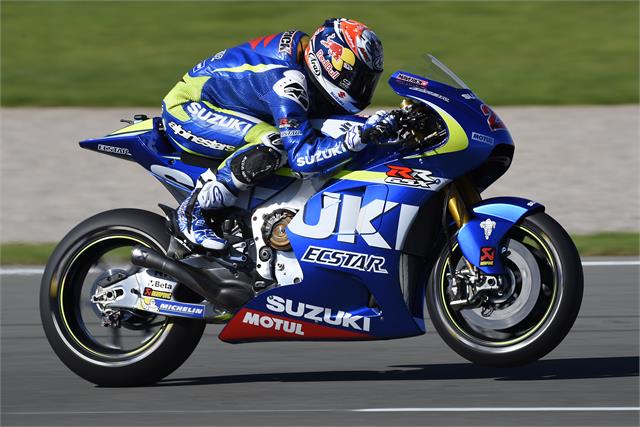 Team SUZUKI ECSTAR has completed a successful private test session at the Sepang circuit in Malaysia today, where Maverick ViÌ±ales and the test team debuted Suzuki‰Ûªs new seamless gearbox on the GSX-RR.

ViÌ±ales was supported in the two-day test by Takuya Tsuda and Nobuatsu Aoki, who ran many laps to supply Suzuki‰Ûªs R&D department in Japan with useful information and data before the winter break.

Unfortunately, Aleix EspargarÌ_ couldn‰Ûªt join in because of the injury he suffered recently while training that caused him a flexion fracture to a vertebrae and required a two-to-three-week lay-off.

‰ÛÏThese have been two very intense days but the outcome of the test is positive." Team Manager Davide Brivio said. "We had few things to test, among which we managed to test the new seamless gearbox and I am happy that Maverick had a first positive impression.

"We also had the chance to compare some chassis parts and gathered important information for the winter development. We also started to work with the 2016 unified software - the test team already started with it in Valencia a couple of weeks ago - and we also gave it to Maverick.

"On this area we still have much work to do but the start was positive. For us this test has been very important to give the directions to work-on in the winter that we were called to do. We also tested new tyres for Michelin and found some good improvements to be worked on further in the future.

‰ÛÏIn February we will be testing here again for the first IRTA test and we will try to finalise then even further improvements, especially in electronics. Unfortunately, Aleix could not join us so he will have a chance to test those items in February, hopefully after further improvements. We also had the support of our test riders Tsuda and Aoki who ran many laps to further investigate the new software and fine-tune the seamless gearbox.‰Û