Porter, Fewster, Moore and Robertson on top at WAMX Round 4 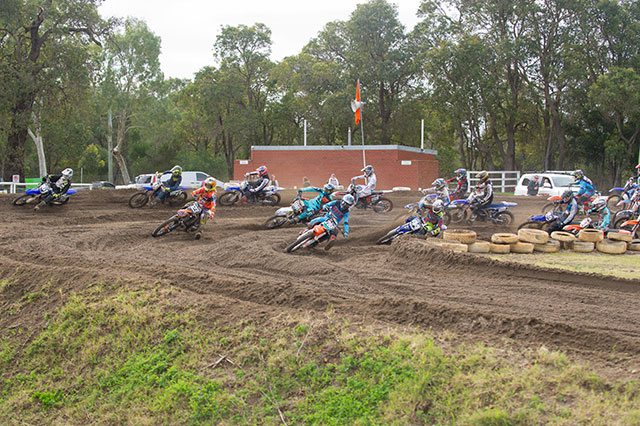 Bunbury was the mecca for motocross as round 4 of the 2016 of the Make Smoking History WAMX Senior State Championship, went all out- wearing pink in aid of supporting Breast Cancer at the Bunbury Motorcycle Club on Sunday July 24th.

Shrubland Park circuit was in pristine condition at day‰Ûªs beginning and with a bumper rider entry from across the state, it sliced, diced, spat out and dished up some of the best racing of the season, with the state championship titles all but wrapped up in some classes, and in the balance in others.

Again there were disappointing numbers in the Vets which had them mixed with the All Powers Clubman class for this round. Scott Petricevich was dominant from Trevor Unstead, and they were the two standouts for the Vets, as the All Powers would register Kylan Black as the round winner by virtue of his strong first and last moto results.

Black struggled with the second moto in the six lap sprint, but was able to muster enough for the round win. Cody Hunt, who is edging closer to a moto win picked up second for the day with Jaxon Turner joining him on the podium for third overall. Jett Cockman, Jordan Matthews and Ryan Gear would lock down consistent results with Luke Gaske, Ricky Ladiszlai, Trent Walton and Baylie Helgeland making up the top ten.

Jack Du Feu (2-1-2) secured the MX2 Repecharge round win by one point from Cameron Willsher who recorded two race wins for the day. Quaid Smith would join them on the podium for third overall. Tom Varley, Aiden Johnstone, Matthew Marson, Sean Heard, Josh Nichols, Brandon Campbell and Kyle Elliot all displaying great form improving as the day went on, but weren‰Ûªt quite able to pick up the points or positions to challenge for a top three finish. 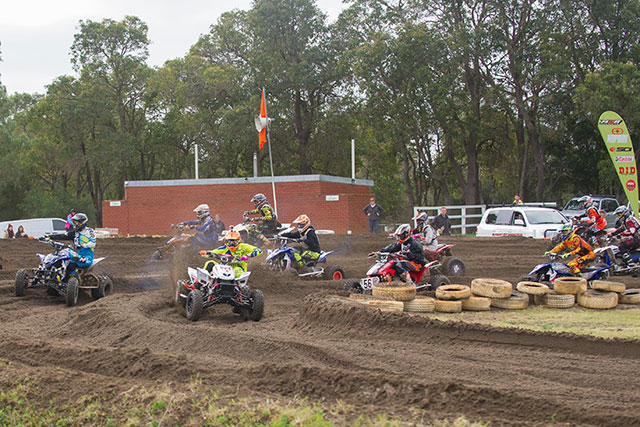 Luke Gaisford takes the early lead in the Quads. Credit: True Spirit Photos/Gordon Pettigrew
Coming into this round Quad Class series leader Luke Gaisford was in a prime position to secure another title to his massive racing resume. It was a day, when Gaisford‰Ûªs day came unstuck. Both Gaisford and Luke Capocreco suffered mechanical issue with Capocreco recording a DNF and Gaisford able to salvage some points in the opening moto. Bunbury would be all Tyron Robertson, who took out all two race wins and a third to stand atop the podium with Michael Murphy pulling strong results for second overall, despite himself underdoing bike issues and Daniel Soltoggio‰Ûªs three moto consistent results having him finish on the third step of the box.

With mixed results across the day for Luke Ovens, Adam Filbey and Colin Blashaw, as well as Luke Capogreco and James Ognenis who would register a DNF due to mechanical issue, and Luke Gaisford who would finish in 14th for the day despite taking out the last moto win in dominating style. All is not lost for Gaisford who holds a 26 point lead heading into the next round, with his fellow competitors still within grasp of securing some lucrative championship points with two rounds left to run, the Quad Championship class is certainly in the balance! 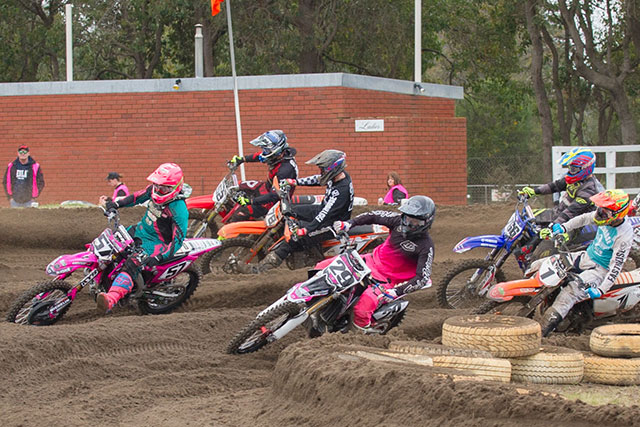 Robbo Lovett leads MX1 Moto
Coming into Bunbury, with two Womens Class round wins, Jess Moore is primed to secure this year‰Ûªs championship and add to the results her round win at Bunbury and it is almost a signed, sealed and yet to be delivered certainty. Moore (1-1-1) was in great form taking the round win from Lily Kent who recorded two strong holeshots before Moore‰Ûªs dominance took the lead. Kent would finish in second overall for the day after a countback on points with Chelsea Blakers who would finish third for the day. Special mention must go to Jess Sainsbury who stopped her own race to help Lily Kent, who was trapped under her bike. The women‰Ûªs championship takes a break before reconvening at the finale round 6 at Byford.

It is hot at the top of the MX2 Class leader‰Ûªs board with Josh Adams maintaining the series lead over David Birch. The surprise package of the day was the consistent efforts of both Jake Fewster who took the round win (1-1-3) and David Birch who finished second overall, and would have secured the round if not for a race penalty for a jump start in the second race. Series leader Adams would secure third for the day by a point over defending champion Dylan Heard. Tom West had his starts dialled in with good racing from Luke Few, Jack Perkusich, John Darroch and Jonathan Hartley, with mechanical issues forcing the day‰Ûªs end to Brody Cassidy. 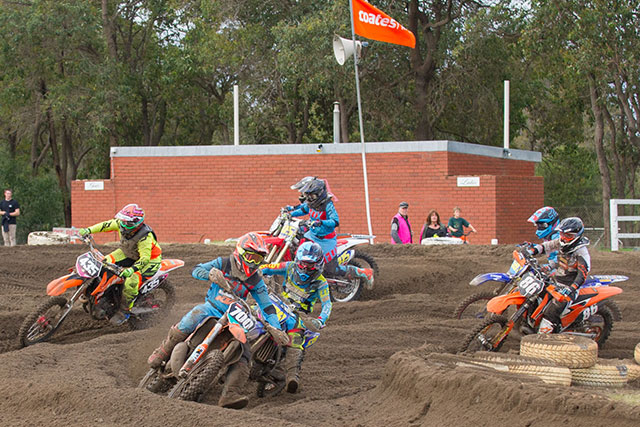 Lily Kent holeshots the Womens. Credit: True Spirit Photos/Gordon Pettigrew
Whilst only two points split the MX1 lead of Robbo Lovett from defending champ Dean Porter, both riders would look to try and secure the round win. The honours went to Porter who would register a perfect scorecard (1-1-1) and prove he is indeed a master of sand racing. Robbo Lovett would secure second for the day despite crashing in two motos, with Charlie Creech joining them again on the box for third place. Mitch Taylor would record a mixed bag of results for fourth position ahead of Michael Mahon, and local rider Ryan Scarlett would enjoy his best results of the season on his home track with Craig Bolton, Julian Cutajar, Oliver Smith and Brynn Cutts. Dean Porter, for the first time this year carries the red plate as the series leader by 13 points over Lovett, and with two hardpacked rounds coming up, the MX1 Championships is far from being secure!

Only two rounds remain, with the next round heading to the hardpacked track at Southern Cross on August 14th.