Porter and Fewster On TOp At Coastal Park 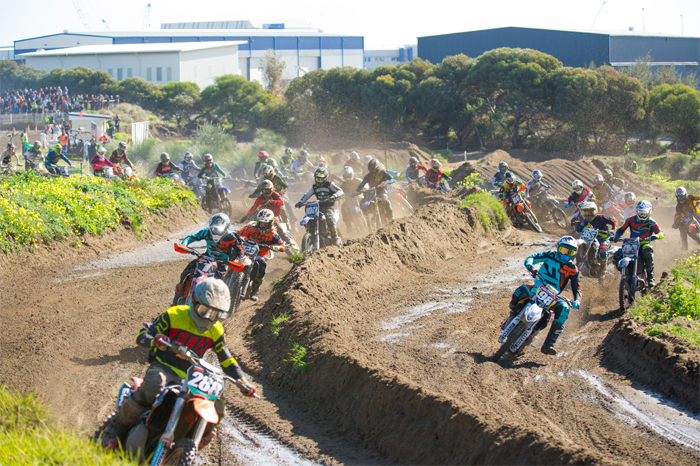 It was four seasons in one day at Coastal Park in Henderson for Round 3 of the Make Smoking History WAMX Senior State Championship, which also marks the halfway point of the season.

The deluge of Perth rain resulted in a delayed start due to track repairs, and the sandy surface was excessively heavy with huge puddles and as the day went on riders were actually bogged past the swing arm!

It was indeed an epic day with close tight racing and no certain winner‰Ûªs guaranteed. There were massive crashes, bent bikes, goggle issues, heavy rain, and brilliant sunshine. By the days end everyone agreed that motocross was definitely the winner!

In the MX1 championship class it was Robbo Lovett who qualified fastest but was unable to hold off the shear brilliance of Dean Porter on his home track at Coastal Park.

Porter‰Ûªs perfect race card (1-1-1) had him on the top of the box for the first time this season with Lovett securing second (2-2-2) and Mitch Taylor third for the day. Charlie Creech, Michael Mahon, Julian Cutajar, Chris Ruttico and Craig Bolton would scramble within the top ten, with thrills, spills and crashes across the day.

Robbo Lovett retains the red plate and series leader by only two points from Dean Porter, and with the next round hitting the sands of Bunbury later this month, Porter is sure to make a charge in the championship.

With Luke Davis absent for round three the door was left open and opportunities seized as Jake Fewster secured the round win in the MX2 class (1-1-1) with a perfect scorecard.

Defending MX2 Champion Dylan Heard answered his critics bouncing back to secure a strong second overall (2-3-2) and 2011 champion David Birch third for the day. Series leader Josh Adams finished in fourth overall and sits 57 points clear at the top of the leader‰Ûªs board.

Carson Bascombe was solid for the day with Brody Cassidy lining up for his first race meeting back after his major crash and recovery from the Aus X Open last year, finishing sixth for the day.

There were disappointing numbers in the Vets class, however Trevor Unstead (2-1-1) worked hard for his three motos to secure the overall round win.

Dean Castlehow (1-2-4) and Greg Christie (3-3-2) battled for the podium and Castlehow was on track for the final moto win until he became stuck in the quicksand down to the swingarm which saw the field pass him by. Shaun Kelly, Mick Perkusich and Anthony Fiaschi had tough motos in trying conditions.

Jordan Matthews was on point in the All Powers Challenge going (1-1-1) to take the round win from John Blincow and Ryan Gear third for the day.

Though the results might not reflect it, the racing was tough and highly competitive with Corey Ablett, Cody Hunt, Ricky Ladiszlai and Josh Nicholas battling the three motos with Liam Hitchcock and Brady McColl and Michael O‰ÛªBrien.

Tyron Robertson revelled in the tough conditions in qualifying to secure the fastest lap time. in the quad class.

The quad class put in some of the season‰Ûªs best racing with pile ups, roll overs, crashes and half the field bogged in the quicksand, the day‰Ûªs action packed racing would see consistency paying off with Luke Ovens securing the round win by one point over series leader Luke Gaisford second and James Ognenis taking third for the day. Adam Filbey, Daniel Soltoggio, Michael Harcourt and Bryce Clark pulled strong results, and with Gaisford retaining the red plate and a handy 55 point lead, he is on track to pick up another WA Championship.

With the girls hitting up qualifying wearing pink bras in a sign of support for all ladies touched by breast cancer, this round was the second outing for the Women‰Ûªs class.

Jess Moore wasted no time in stamping her authority picking up the fastest lap time for qualifying and the round win by virtue of her clean sweep (1-1-1). Defending champ Chelsea Blakers picked up second overall after finishing on equal points with Lily Kent who finished third for the day.

For full round results and championshionship standings CLICK HERE