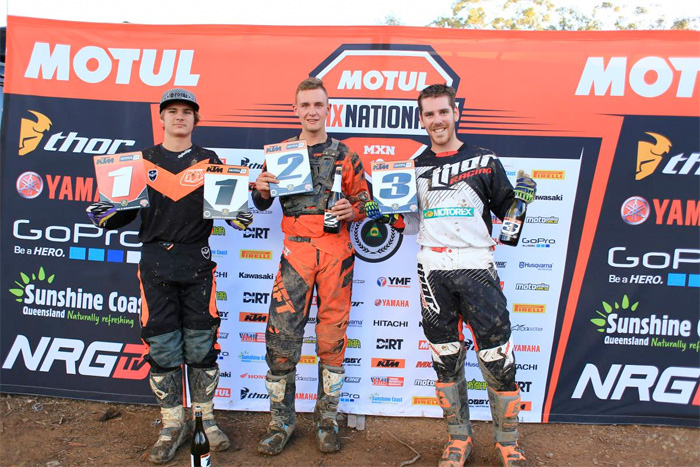 With a heavy downpour on Saturday night, the Amateur Cup competitors were greeted with sloppy and challenging conditions on Sunday morning, turning the day‰Ûªs racing into a survival of the fittest!

In race one, from the minute gates dropped there was carnage left right and centre for the Amateur Cup class, but it was fittingly KTM mounted Polsoni who snatched up the holeshot, and then led the race from start to finish - leaving the thrills and spills to happen behind him.

With the first race of the day for the KTM Australian Amateur Cup being short and sweet, positions remained relatively unchanged for the remainder of the race - and when the chequered flag flew, Polsoni secured the opening race win ahead of Morrissy and Melis who wrapped up race one in second and third places respectively.

In race two, as the ruts began to develop and the day wore on, it was another fitting battle for the KTM Australian Amateur Cup competitors.

When the gates dropped for the final time, it was Kerrod Morrissy who stormed out in front to claim the holeshot, as competitors deciphered through the changed track conditions with only 15 minutes to get the job done.

However, it was Polsoni who once again proved to be a step above the rest, moving in to the race lead, followed closely behind by Melis and Morrissy who had dropped back to third.

By the half way mark in the second moto, positions remained relatively unchanged, with healthy gaps developing throughout the field as competitors continued around the testing Broadford terrain.

And when the chequered flag flew for the final time for the KTM Australian Amateur Cup competitors, it was Polsoni who crossed the line victorious, to claim his second moto win for the day at round three. While second and third positions were claimed by Melis and Morrissy, followed by De Fazio and Cook finished fourth and fifth respectively.

Bailey Williams managed to redeem himself from the first moto and finish in sixth place, while Newton, Hill, Drummond and Steven Bowen rounded out the top ten finishing places.

When results from both races were combined, Polsoni's 1,1 finishes awarded him the KTM Amateur Cup round victory at Broadford, while Melis and Morrissy wrapped up yesterday's proceedings in second and third places on the podium respectively.

‰ÛÏAs a 16,17, year old I raced in the MXD class and just had a bit of bad luck last year. Now working 40-hour weeks, it‰Ûªs a bit tough to do the ten rounds so the guys at KTM Australia and the rest of my team are helping me out to get to the three rounds of the Amateur Cup, so it‰Ûªs a perfect series,‰Û