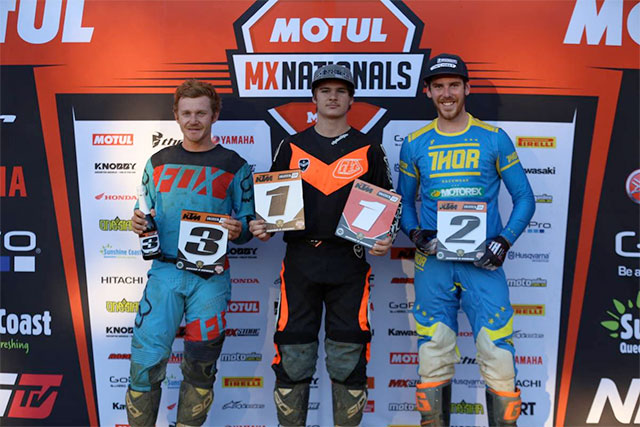 The KTM Amateur Cup Class had their second hit out for the year at the Nowra Motoplex on the weekend, as part of the sixth instalment of the 2016 Motul MX Nationals.

The class which allows riders who don‰Ûªt race full time to race for their own championship, provided plenty of excitement yesterday, with riders extending their points lead and racing to break through podium results.

When riders qualified yesterday morning, it was a familiar sight with KTM‰Ûªs Brad Polsoni emerging as the early man to beat, taking the top time with a 1:47.247 lap, ahead of Kerrod Morrissy (KTM) and Connor Cook (Yamaha).

When the first race got underway for the KTM Amateur Cup class yesterday, it was the number 71 KTM machine of Morrissy that launched out of the gates and in to the first turn with the lead, but it didn‰Ûªt take long for Polsoni to assert his authority.

After only a single lap, Polsoni made the pass on Morrissy for the lead, treating thousands of spectators who watched on as the riders fought for the top spot.

With three laps in the books, Polsoni had completely checked out once again, while Morrissy fought hard to keep his fellow KTM rider in his sights in second position, followed by Joel Newton who continued to circulate in third.

With only a handful of laps remaining, it became clear the Polsoni‰Ûªs form simply couldn‰Ûªt be matched, stretching his lead out to an impressive five seconds, allowing his opponents to fight for positions behind him.

And when the chequered flag flew Polsoni maintained his undefeated score card, taking the race one KTM Australian Amateur Cup win from Morrissy, who raced to second, followed by William Angel (KTM) who passed Newton in the closing stages of the moto to collect third.

In the final race of the day for the KTM Australian Amateur Cup Competitors, once again Polsoni proved why he‰Ûªs a league above the rest.

After moving in to the lead straight after the gate dropped, Polsoni did not look back, and when the chequered flag flew for the final time yesterday, the KTM rider took an unchallenged race win ahead of closest rival Morrissy. Kawasaki rider Jake Mead finished in third place, fourth place in the final race of the day was taken by Trent Brochtrup (Kawasaki) while Daniel Jones completed the top five.

With Polsoni undefeated for the second time this year, once gain the KTM rider took the KTM Australian Amateur Cup round honours at Nowra. Second spot on the podium was Morrissy, while third place was snatched up by William Angel who‰Ûªs consistent 3rd and 7th place finishes paid off.