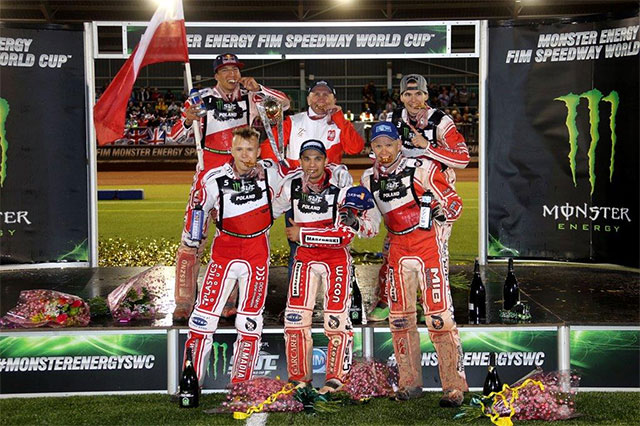 Pawlicki‰Ûªs men topped the rostrum at the National Speedway Stadium on 39 points, seeing off hosts Great Britain, who won silver for the first time since 2004 with 32, last year‰Ûªs winners Sweden (30) and Australia (22).

While Kasprzak played his part in a fifth SWC title triumph and 2013 winner Dudek won his second gold medal, Pawlicki and Bartosz Zmarzlik won the Monster Energy SWC for the first time.

And to lift the Ove Fundin Trophy into the Manchester night sky was a special moment for the Leszno-born racer.

"This is a big day for me because this is the first time I‰Ûªve raced in the Polish senior team and I was captain today," Pawlicki said. "I have to say thank you to the guys. All the riders, Patryk Dudek, Bartosz Zmarzlik and Krzysztof Kasprzak, scored good points and we won.

‰ÛÏThis a big night for Poland. This is our seventh gold medal and I am very happy. I say thank you to the coach because for many years, he has coached the Polish team. After Vojens, he said to me ‰Û÷you are the captain.‰Ûª So thank you to him for that.‰Û