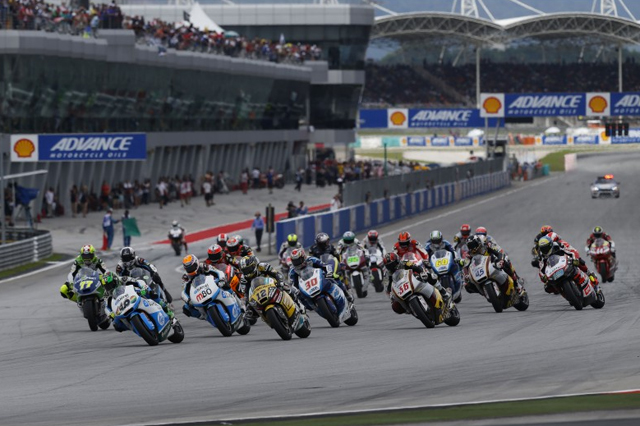 The 2013 Australian Moto2 Grand Prix will go down as one of the shortest ever completely dry races in Moto GP history as Tuenti UP 40 Pons Kalex rider Pol Espargaro won the 13 lap race leading from start to finish.

Due to some heavy crashes by multiple riders throughout qualifying and practice and similar tyre degradation issues as the MotoGp class, the Moto2 riders had their race shortened to just 13 laps making for a fast paced sprint race that was without championship lead Scott Redding.

The British Marc VDS Racing Team Kalex rider who came into the weekend with a slender nice point lead over Espargaro was sidelined from this years race after a breaking his wrist during the qualifying session.

Espargaro took full advantage of the situation fending off a strong early attack from Alex De Angelis (NGM Mobile Forward Racing Speed Up), who later set a new lap record. In the closing laps another fierce attack came from Thomas Luthi (Interwetten Paddock Moto2 Suter), but it was not enough as Espargaro crossed the line to take the win and also the Moto2 points lead.

‰ÛÏAll my life I had a dream to be World Champion, sooner or later. It is not done, yet, but it is close. I can't believe where we are and what we did. " Espargaro enthused. "I‰Ûªm not 100 percent happy because while I have overtaken Redding in the championship points, he was not on track, and this is not good.

"But this is racing, where every lap and corner can be dangerous. Anyway, we are not still champion. For sure we are going to work hard as we did all season‰Û 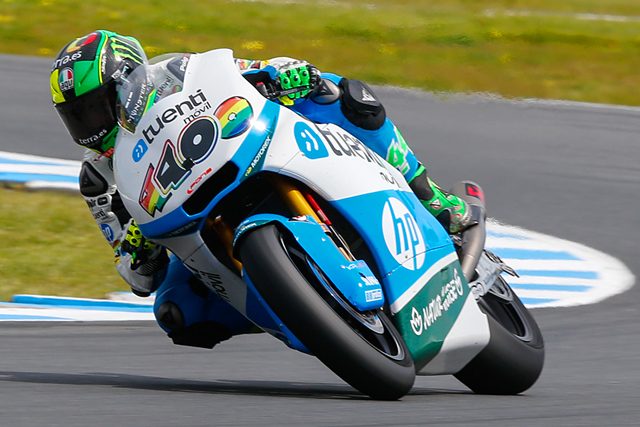 Pol Espargaro is the new Moto2 championship leader with just two rounds remaining in the series - Credit: Honda Racing
Luthi crossed the line just over half-a-second adrift for his best result of the year, himself fending off a last-lap attack from German GP winner Jordi Torres (Aspar Team Moto2 Suter), less than a tenth behind. Simone Corsi (NGM Mobile Racing Speed Up) was almost as close to him, with De Angelis on his back wheel, and the top five covered by 1.1 seconds.

‰ÛÏWith just 13 laps there was just one strategy: full throttle from the go." Luthi stated. "Such a short race, actually, too short for me, because I had quite a good set-up and was not scared at all by a full length.

"Due to safety reasons we had to do this short race, so I had to change the strategy. The target was to get a good start and push straight from the beginning. After one lap Pol opened a gap, then he made a small mistake, and I was there immediately, but afterwards I made a mistake, and at the end it was not possible to catch up and fight for a victory.

"I had to battle to keep the other guys behind me, not easy, but at the end second is great. I didn‰Ûªt struggle at all with the tyres during all the weekend with lost rubber or anything like that," he added.

Australian rider Anthony West (QMMF Racing Team Speed Up) fought through to tenth in a crowd-pleasing ride after finishing the first lap in 20th. 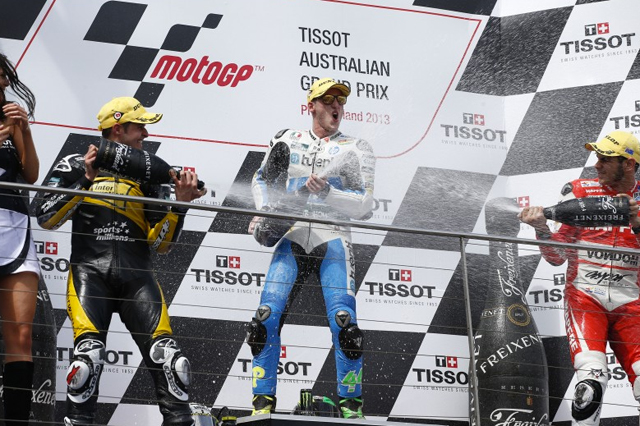