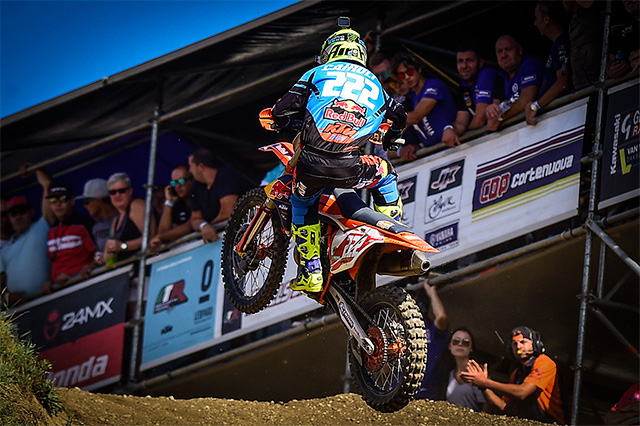 Antonio Cairoli beat out Tim Gajser for pole at the Czech GP
While Cairoli and Nagl battled Gajser pulled a slight gap over the pair. Behind the top three was the other Red Bull KTM Factory Racing riders, Glenn Coldenhoff and Jeffrey Herlings. Coldenhoff started the in 5th but moved into fourth after Suzuki World MXGP‰Ûªs Arminas Jasikonis fell out of the position. Jasikonis would remount but only make it back to 18th.

Herlings didn‰Ûªt have quite the start as Coldenhoff but made up for it with a late charge. Herlings managed to pass for three positions in the last three laps first on Monster Energy Yamaha Factory MXGP Team‰Ûªs Romain Febvre, then Rockstar Energy Factory Racing‰Ûªs Gautier Paulin, and finally Coldenhoff for 4th.

Back at the front Cairoli found a way around Nagl on lap 7 and quickly closed on Gajser. Gajser eventually left the door open and Cairoli took the lead on lap 9 which he would grow to over 5 second by the finish 5 laps later. Cairoli in the press conference said : ‰ÛÏ Today was better than years before there were more berms and you could make some different lines. It‰Ûªs nice to have a good start and it‰Ûªs also really important on this track. We are starting to the look at the championship so it is really important to get good points and we know it is not always possible to win, but will try to take as many points as possible tomorrow."

Team Suzuki World MXGP‰Ûªs Kevin Strijbos is back in action after suffering some injuries recently. The injuries however didn‰Ûªt show as he had a strong start and finished 10th.

‰ÛÏIt was not easy but I got a good start in the qualifying race, I was in 6th and ended in the top ten. I like the track every time I come here, hopefully I will have a good race and get in the top 10 or even the top 5 tomorrow," Strijbos said. 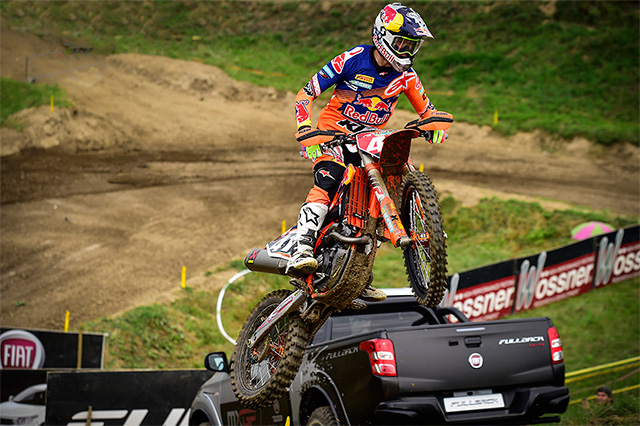 Pauls Jonass was on top again in MX2 qualifying
Red Bull KTM Factory Racing‰Ûªs Pauls Jonass came across the finish line in first every one of the 13 laps. Jonass‰Ûª good start allowed him to focus and gap the competition by 11.5 seconds.

‰ÛÏLast year I had a big crash here, but overall I enjoy this track, I like riding here. Feeling was good today, I just could ride my own lines and was able to try some new lines for passing tomorrow." Jonass said.

The American, Covington wasn‰Ûªt alone either at first it was his fellow countryman, Monster Energy DRT Kawasaki‰Ûªs Darian Sanayei.

In his first race back since Ottobiano, Sanayei had a strong performance even after being passed by Kemea Yamaha Official MX Team‰Ûªs Benoit Paturel.

Across the finish and past the checkered it was Prado who withstood the charges of Covington to finish 2nd followed by the American, Paturel, and Sanayei.

LRT KTM‰Ûªs Julien Lieber was initially battling in the top three but made a mistake and went off track and he finished 15th.

The winner of the last 2 GPs, Suzuki World MX2‰Ûªs Jeremy Seewer suffered a bad start in outside the top 20, then made a mistake dropping him even further to 31st before coming back to finish in the 21st position.

Aussie Hunter Lawrence finished 14th in his first race back from a back injury. Lawrence's compatriot Jed Beaton finished 18th fastest in his debut for the Team HRC - MX2 team.