Podmol triumphs at the NIGHT of the JUMPs in Cologne


For the eighth time, the longest running Freestyle MX competition sports series in the world returned to Cologne with NIGHT of the JUMPs.

At the the LANXESS Arena, the 7th round of the FIM Freestyle MX World Championships took place in front of 11,000 fans who didn‰Ûªt want to miss a thing.

Before the German round began, there were already big omissions from the rider list. Firstly the 18 year old German rider, Luc Ackermann, who broke his leg in preparation for Cologne, then Remi Bizouard broke his hand in training. In the morning‰Ûªs training session at the Lanxess Arena, Maikel Melero floated a backflip and lost control of his bike at a height of 15 metres, landing without the bike. With only a few bruises, the little Spaniard was very lucky to avoid much more substantial injuries.

With three favourites eliminated from the event, the World Championship points were open to all remaining riders. However they had to get through the Qualification round. This proved to be extremely difficult for veterans of NIGHT of the JUMPs, David Rinaldo and Australian Rob Adelberg. First, Adelberg had a dead sailor in his run (a jump without scoring a trick) and then Rinaldo made mistakes with two tricks. The Aussie was able to save sixth position in qualifying while Rinaldo had to settle for seventh and miss the final round. 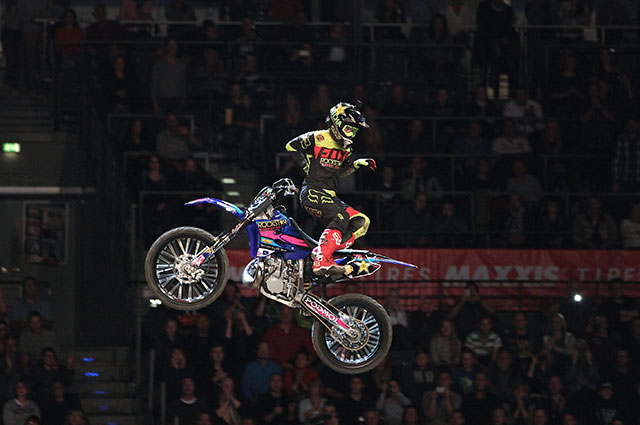 Winner Libor Podmol
The hopes of the local German crowd laid with Hannes Ackermann, who was unable to make the dream comeback he had hoped for. After a long injury, Ackermann opted for a safe run and finished in eighth position. Marc Pinyol rounded out the qualification in final position. With the tricks we know Pinyol has, it would have been a crazy final, however from the first jump of competition, he crashed the Nac Egg Roll. Although he continued his run, he wasn‰Ûªt able to land the Inside Roll in the Double up and couldn‰Ûªt progress.

Besides Adelberg and the two Czech riders, Libor Podmol and Petr Pilat, the two Italian riders made it to the final. Leonardo Fini and Davide Rossi. Brice Izzo also showed consistency to make it to the final.

The LifeProof Best Whip was between Massimo Bianconcini and Marc Pinyol. The Spaniard put everything on the line with a big Turn Down, but ultimately in the final round, Massimo held a big turndown and the judges agreed the Italian would win.

In the Maxxis Highest Air competition there were two medallists from X Games with Bianconcini and Podmol. The Italian jumped over 10.00 metres after being pushed by the Czech rider. Podmol was unable to counter after pushing the bar from 6.50 metres and Bianconcini took win and exacted revenge for Podmols victory at X Games. 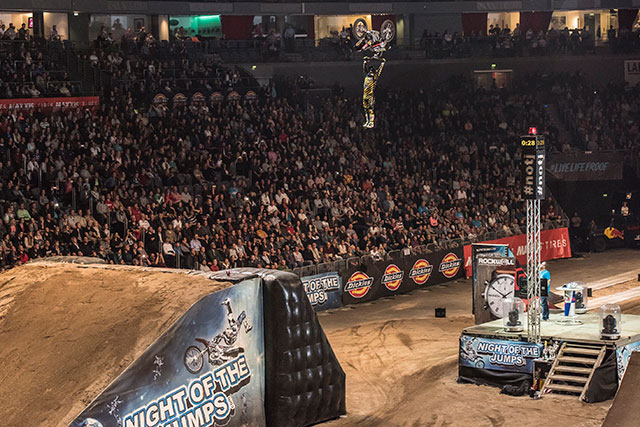 Runner up Australian Rob Adelberg. Adelberg now sits third in the chamionship
In the final, the 11,000 spectators were whipped into a frenzy with incredible performances. Leo Fini just missed out on his first podium position despite bringing a clean California Roll. His countryman Davide Rossi didn‰Ûªt have the Body Varials or Quarter pipe tricks and so was also unable to move up the rankings. Finally finishing in sixth place with Brice Izzo relegated to fifth place after a solid final round.

Rob Adelberg had a lot to prove after his performance in the qualification. He laid down a super clean run and went straight to the top of the Hot Seat. The Audience favourite, Petr Pilat showed different variations in his run and perhaps if he landed the Flair, he might have overtaken Adelberg. But he chose the safe option and didn‰Ûªt attack the Quarter Pipe. He was nevertheless happy with his overall third position result.

Now only Podmol could catch the Aussie. With a Surfer to Tsunami Flip and the California Roll in his run, he was going to be hard to beat. But when Podmol tried the Egg Roll Heelclicker and crashed, the victory was almost gone. But the Czech fought back adding one extra trick to his run and finishing with the Volt Body Varial as the Double Up. His energy boosted his overall impression with the judges and Podmol was crowned the winner in Cologne.

Despite the injuries before and during the event, Maikel Melero (120 points) and Remi Bizouard (100 points) remain at the top of the overall World Championship leaderboard. Podmol was able to improve with his victory to sixth place overall.

For the rider, there are only a few days to relax before the next NIGHT of the JUMPs World Championship round in Riga, Latvia (15th October, 2016, Arena Riga).