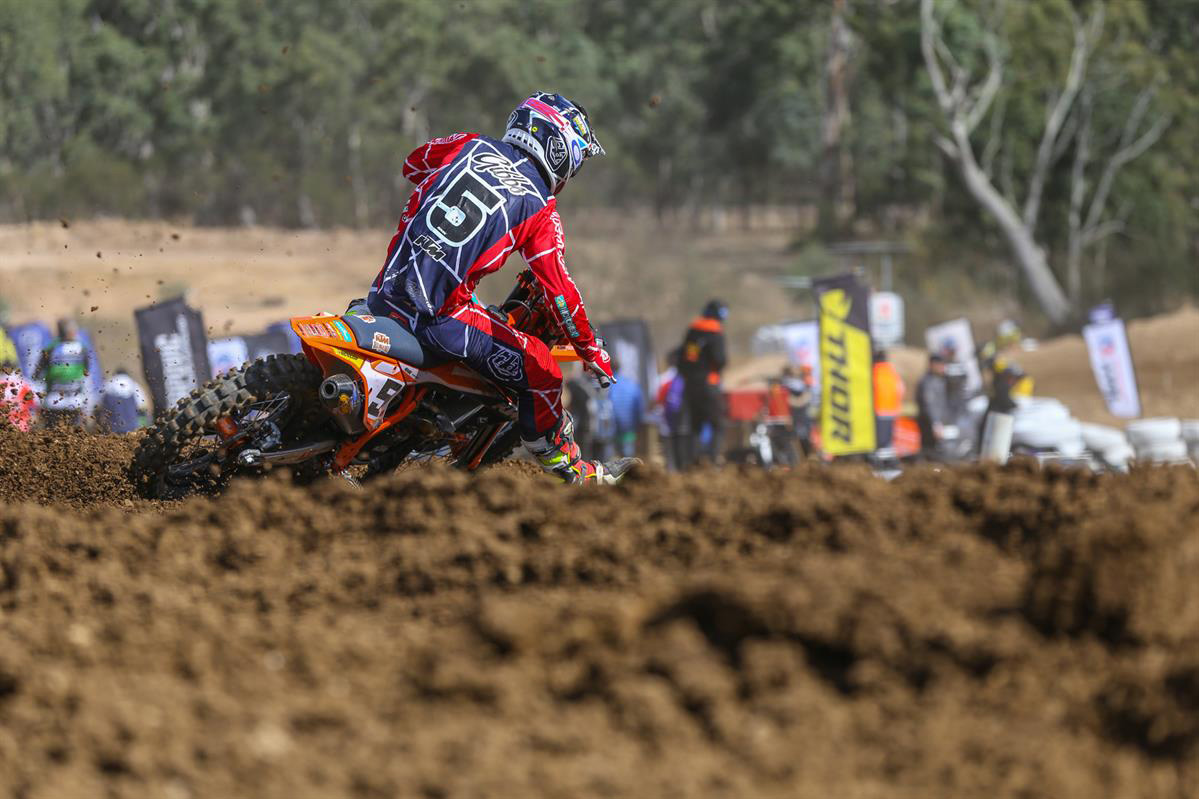 The KTM Motocross Racing Team experienced multiple podiums at Wonthaggi‰Ûªs third and fourth rounds of the 2018 MX Nationals in Victoria this weekend in what was a taxing event contested in trying conditions.

Saturday‰Ûªs round saw Luke Clout step up and clinch third overall in MX1, tied on points with second after recording a 3-4 scorecard. It was an impressive day from the New South Welshman in what were demanding motos.

Former champion Kirk Gibbs looked set for a promising weekend, claiming Super Pole with the fastest time in qualifying before scoring second in race one. Moto two saw the number five shoot out to the lead, however an unforeseen error in the roller section resulted in a heavy fall for Gibbs, who displayed his true character in never giving up, visiting the mechanics area for repairs before salvaging 26th for 11th overall.

Sunday proved to be a more difficult day for Gibbs and Clout in the premier class however, as the pair mustered up fourth and sixth overall placings respectively, which now positions them third and fourth in the championship standings on-board their KTM 450 SX-F race bikes.

Defending MX2 champion Egan Mastin showed signs of progress during round three, earning fifth overall with 6-5 results. His best was yet to come, as Sunday‰Ûªs instalment saw the youthful talent return to his usual form on board his KTM 250 SX-F to collect second overall with 4-2 moto scores, repositioning himself in championship contention as a result.

Jay Marmont ‰ÛÒ Team Manager, KTM Motocross Racing Team: ‰ÛÏIt was great to see Luke on the podium yesterday, he deserved it and it was another impressive ride. Today was a little like yesterday in that the track was really tough and made it really demanding on the bikes and riders. Both 450 riders seemed to struggle a bit more today, as Gibbs had been thrown out of sorts with that crash from yesterday and just didn‰Ûªt seem to recover, while fatigue set in for Clout. Egan really turned his day around and his championship to be honest ‰ÛÒ he went out in practice and was a very different rider ‰ÛÒ he was very free flowing on the bike. With all the DNFs from the others guys, second overall has put him back in the hunt for the championship.‰Û