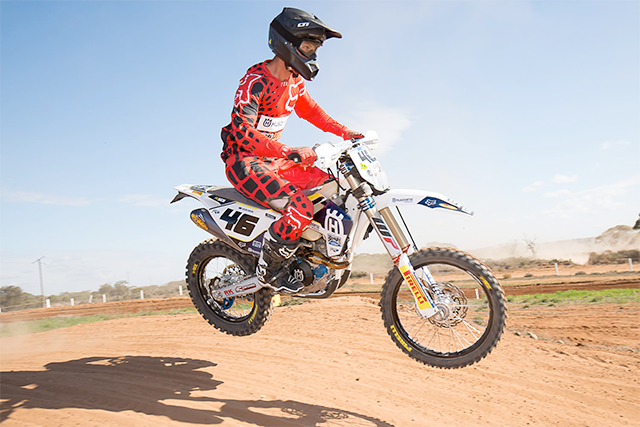 In nasty bulldust that hung in the air or lay concealing shapes in the track surface, Stanford took his Husqvarna FE 501 to second in class on both days, behind KTM‰Ûªs Lyndon Snodgrass.

The two are now locked in a fierce arm-wrestle for big-bore class supremacy with four rounds of the championship yet to run.

Stanford was fifth overall in the company of Australia‰Ûªs fastest off-road racers on Saturday after the intended cross-country round was changed to a ‰Û÷Super Sprint‰Ûª amid safety concerns, and stepped that up to fourth on Sunday after longer exposure to the extremely tricky environment.

‰ÛÏThe dust was pretty tough this weekend," Stanford recalled, "There was no way they could have run a cross-country, so we had a sprint on Saturday and only did three laps on Sunday. I struggled a lot on Saturday, and couldn‰Ûªt find a groove, but Sunday was a little bit better. It was just really rough and dusty and a pretty techo track. Sunday though I started to find a few more seconds and some flow. The bike was awesome - I just need to get it up front and be battling for that win."

"Not the best weekend for the E3 championship; taking two seconds to Lyndon was a pain," Stanford added, "We‰Ûªre just going to have to pull the finger out I guess. The next one is at Kyogle so that will give me a bit of a home track advantage, hopefully.‰Û 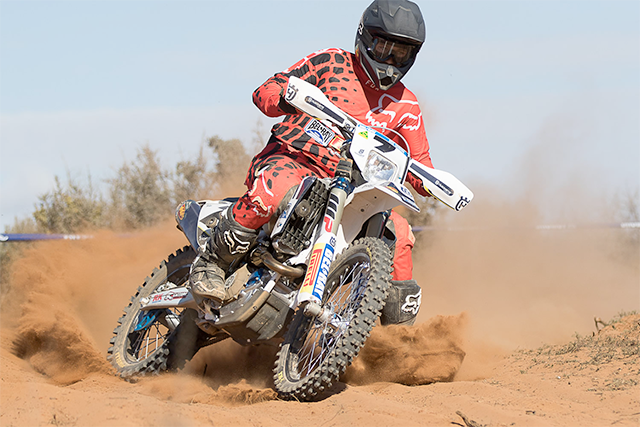 Broc Grabham finished fifth and sixth in the E2 class. Credit: John Pinnell
At the other end of the Husqvarna tent, Broc Grabham started poorly and found himself often at the mercy of the fortunes of the rider ahead (and that rider‰Ûªs dust cloud.

Grabham finished fifth and sixth in the E2 class, and could only look ahead to the next AORC stop at Kyogle, where he hopes some more enduro-style terrain will play into his hands.

‰ÛÏIt was a very frustrating weekend again for me," Grabham lamented. "On Saturday I had an okay first lap apart from a small drop a few corners in, where I got going fairly quick. But then, whoever would start in front of me would seem to have a drama and I‰Ûªd just get dusted by them the whole way and lose 20+ seconds per lap!

"I‰Ûªm looking forward to Kyogle; all these rounds so far have been the fast, hang-it-all-out tracks, that suit the motocross guys or those who push their limits, whereas I‰Ûªm one of those guys that likes a more technical track. Kyogle is more like proper enduro terrain, so I‰Ûªm looking forward to getting some decent results there.

"Even with 30-second gaps I still got to sections and had to stop until I could see where the track was going, so I didn‰Ûªt head-butt a tree or something. It wasn‰Ûªt much fun and it wasn‰Ûªt much like racing. It‰Ûªs more just following the dust.‰Û 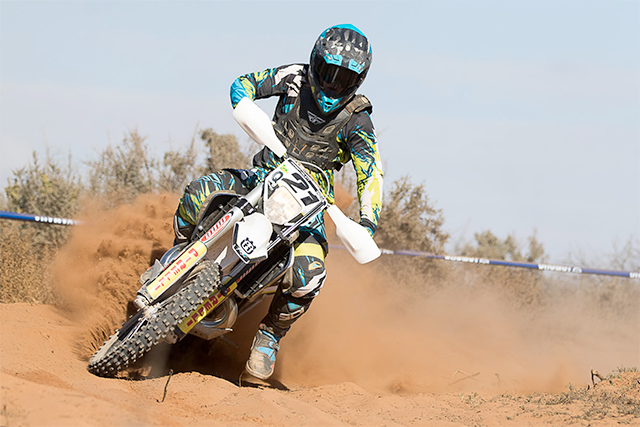 The Brisbane rider again landed well inside the top ten overall, taking sixth and then seventh for the weekend, with times that, on both days, would have won him the E1 class!

‰ÛÏSixth and seventh for me. The TE 250 loved the track and it was good just to be able to keep on it all day," Higlett said. "I liked the track and I seemed to go well on it. The bike ran perfectly all day. It‰Ûªs pretty crazy to think I would have won E1. It was good to find out that I‰Ûªm good on those tracks, so we‰Ûªll see how I go at Hattah next. I‰Ûªm not sure where the championship lies. In the first two rounds, my hands just fell apart, so Michael Driscoll got a few points on me there. He got third today so I would have got a couple of points on him, but we‰Ûªll see. We‰Ûªre going to stay in Mildura now for two weeks before Hattah and do some riding!‰Û