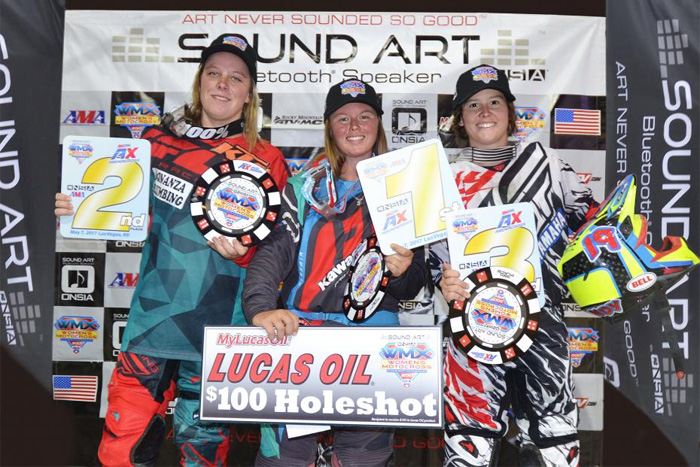 The ONSIA Sound Art Women's Motocross Championship (WMX) rolled into Las Vegas this weekend as part of the AMSOIL Arenacross series for Round Four of the eight-round series..

Although the Arenacross format was a bit different than their conventional two-moto motocross format, a full gate of the fastest women motocross racers in the country were on hand to take on the challenge - including two-time and current WMX champion Kylie Fasnacht.

The WMX series fit perfectly into the Arenacross schedule with practice rounds held on Saturday, and the qualifiers and main event on Sunday. Factory KTM's Mackenzie Tricker was first to strike by winning the first heat race.

Tricker was followed by Brandy Richards, Jaymie Hajewski and Lauren Woods. Tricker was a last-minute entry as her scheduled GNCC event was rescheduled to a later date due to extreme weather conditions. "This weekend was very last minute," explained Tricker.

"I haven't been riding much motocross and absolutely no Arenacross since Vegas last year. After the GNCC was postponed I quickly put together everything with KTM to come and race." Tricker commented.

In Heat 2, Shelby Rolen took the holeshot and led the first couple laps with Fasnacht in tow. It was obvious both riders had previous Arenacross experience - or it at least it looked like it as they proceeded to cut inside each other, banging bars and putting on a great show for the crowd. Fasnacht took the heat race win, followed by Rolen, Amanda Brown and Marissa Polencheck.

The stage was now set for the main event with 16 women representing 11 different states and Canada. It was a ten-lap main event with Fasnacht grabbing the MyLucasOil.com holeshot followed by Rolen, Woods and Richards. By the end of lap two, Richards worked her way up to second and Tricker, who was buried back in the pack off the start, quickly caught up to third followed by Rolen.

While Fasnacht set the pace out front, Richards and Tricker started trading 2nd and 3rd place positions. Tricker eventually got by Richards and made it stick, setting her sights on Fasnacht, but the current WMX champion was too far in front to reel in and took the overall win.

Tricker finished second, Richards third and Rolen put in a solid, consistent ride, finishing fourth. Carrie Killebrew finished fifth followed by Lauren Woods and Jamie Astudillo, who took a serious header in the whoops during her heat race and soldiered through a wrist and hand injury to earn valuable series points.

The pace was fast and the ladies quickly adapted to the tight confines of the Arenacross style racing.

"It was awesome to switch it up for the weekend and get to race an Arenacross event," said Fasnacht. "Going to an Arenacross format was a change, but I loved it and I hope we get a chance to do it again."

"Overall, I'm pretty happy with my results," said Tricker. "I won my heat and took second in the Main. I got off to a bad start but made it to second place, and then I actually got passed and was in third for a few laps, but then made it back to second. All in all it was fun to race and I had an okay weekend."

"My main even went pretty well," explained Richards, who splits her time between racing WMX, WORCS and the Big 6 series. "I was fourth off the start and made my way up to second, but I was struggling a little bit in the whoops and fell back to third. Overall it was a pretty good race and fun to do."

Kylie Fasnacht now has a solid lead in the WMX points standings, followed by Astudillo and Canada's Eve Brodeur. Round five of the WMX series will be held in conjunction with the first round of the Lucas Oil AMA Pro Motocross Series at the annual Hangtown Classic opener in Rancho Cordova, California, on Friday, May 19.