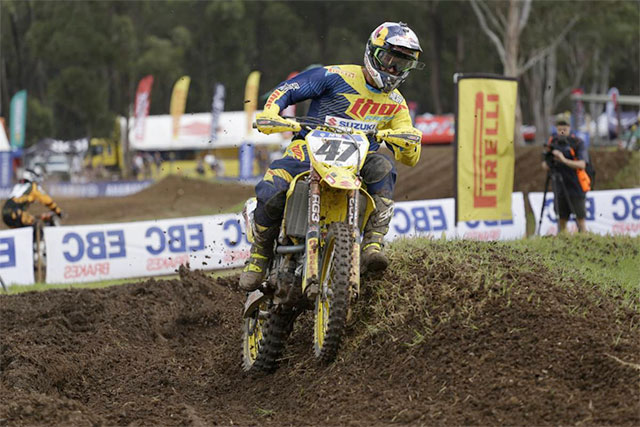 Despite only fielding one rider at round two of the Motul MX Nationals this weekend, Wilson‰Ûªs Coolair Motul Factory Suzuki had plenty of reason to celebrate at Appin today, with Todd Waters putting on an impressive performance to wrap up the round in third position on the Thor MX1 podium.

From the minute Waters hit the track this morning, it was evident that the combination of his speed, and and the Suzuki machine were going to be a force to be reckoned with at round two. And after qualifying in first position, Waters backed it up again in GoPro Superpole, taking the victory with an incredible 1:40.295 lap time.

With first pick of the grid for race one this afternoon, Waters got to a middle pack start, before fighting through and launching into the race lead. After 30 gruelling minutes on the rough and rutty Appin circuit, Waters dropped back slightly to finish in third place at the conclusion of the moto.

In race two, Waters upped his game once again, battling hard with his fellow Thor MX1 competitors, to eventually wrap up moto two in an impressive second position.

With two podium finishes to his name across the course of round 2 at Appin, Waters wrapped up today's racing in third overall, as well as making up valuable positions in the Thor MX1 Championship standings, with Waters now sitting in an impressive third place on 119 points.

‰ÛÏI was a bit bummed with my first race to tell you the truth. I started the day off well taking the win in Superpole so I knew my speed was there, I just needed to get off the line well, but I sort of blew the start in the first moto,‰Û