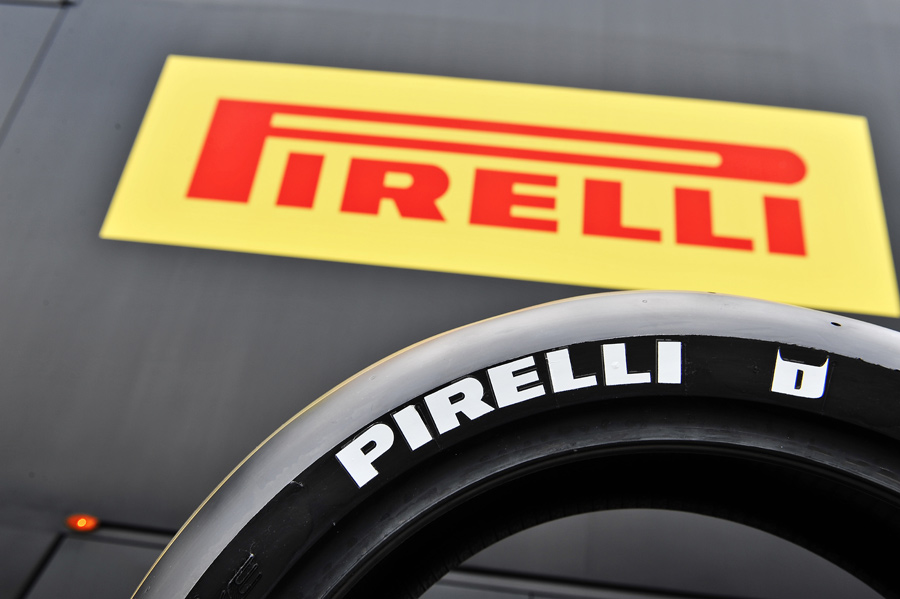 Pirelli has been confirmed as the Official Tyre Supplier for all classes of the eni FIM Superbike World Championship having won the tender organized by Dorna, promoter and organizer of the World Championship, in agreement with the FIM, the International Motorcycling Federation.

The agreement confirms Pirelli in its current role of sole tyre supplier for all the classes of the FIM Superbike World Championship until the end of the 2018 season.

Starting in the 2004 season, and now in its eleventh year, the technical partnership established between Pirelli, the teams and riders of the eni FIM Superbike World Championship can today boast the record of the longest running control tyre supplier in the history of motorsports at international level.

Established with the primary purpose to reduce the overall cost of running the championship, the single tyre formula proposed by Pirelli has steadily increased quality and competitiveness, enabling all the riders, teams and motorcycle manufacturers participating to compete for success in the Championship.

This renewal confirms the leading role in motorsport played by Pirelli - which since 2010 has been the Exclusive Tyre Supplier for the FIA Formula One World Championshipå¨. This represents a strong continuity with the business strategy that has enabled the Italian tyre company to establish itself as a benchmark in the Premium segment as well as in racing and supersport tyre production.

"Pirelli is proud of this confirmation as Official Tyre Supplier for the top Championship for production derived motorcycles." Pirelli bu moto.jpgUberto Thun-Hohenstein, Senior Vice President of Pirelli‰Ûªs Business Unit Moto, said. "It is a partnership that has lasted successfully for over a decade thanks to the constant commitment and well-finished service of our racing team that goes to the track every weekend to support the teams and the riders.

The quality of our tyres is appreciated not only by the riders but by many motorcyclists all over the world who, thanks to the participation of Pirelli in this championship, have been able to rely on everyday more high performing products.

These are all key elements that have certainly influenced in a positive way the choice of Dorna to select us once more as official supplier till 2018".

‰ÛÏWe are glad to continue with Pirelli for the next three seasons." Javier Alonso - wsbk executive director added. "This renewal testifies our excellent relationship with the Italian company, a partnership for more than a decade that has always been strong with both the International Motorcycling Federation and the promoter and organiser of the series, and is clear evidence of Pirelli's ongoing and constant ability to innovate and to offer products at the forefront of technology. 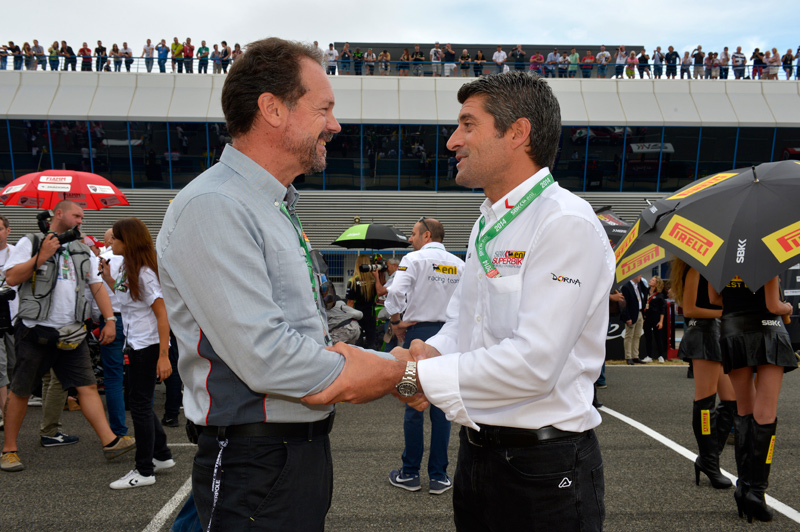 Giorgio Barbier with Gregorio Lavilla
The role of Exclusive Tyre Supplier of the FIA Formula One World Championshipå¨ and the eni FIM Superbike World Championship, in addition to the important efforts in the Rally, Motocross and Endurance World Championships, as well as the most important two and four wheel motor competitions, demonstrates the passion and dedication that Pirelli has always placed in sporting activities, confirming an important feature of the DNA of this Italian company.

"When we first believed in the single tyre supplier solution to reduce the cost of motorcycle racing, the idea was not accepted by everyone in a positive way. They were reluctant and some feared that the quality of the races as well as that of the tyres would have been affected." Giorgio Barbier, Racing Activities Director of Pirelli‰Ûªs Business Unit Moto and Head of Superbike project for the Milanese Company since 2001, pointed out.

"This has not been the case. In more than a decade Pirelli has been able to show that, if well managed, the single tyre supply not only allows the tyre manufacturer to make developments and make available to all motorcyclists unrivalled products, but also permits us to contribute in an important way to the show offered by the Championship.

"After Superbike, other championships such as Rally, FIA Formula One World Championshipå¨ and MotoGP‰ã¢ have chosen this solution and other tyre manufacturers that until recently were the fiercest opponents of the control tyre, in the end changed idea.

"We are happy to have been the forerunners in this direction having understood how the competition could offer an advantage over our competitors through the transfer of technology from track to road. We will continue to strive to offer teams and riders of the Superbike World Championship, as well as all motorcyclists, tyres with more performance, using the strong philosophy that has always supported us in these years: We sell what we race, we race what we sell!"

‰ÛÏThe consistency in the technical support provided by the brand with the long "P" at the races with their presence in the paddock and their professional development away from track provides the competitive racing and the year on year improvement in terms of lap times that we have seen over the years. The continuation also provides both teams and riders with confidence in making further steps forward in the next three years‰Û 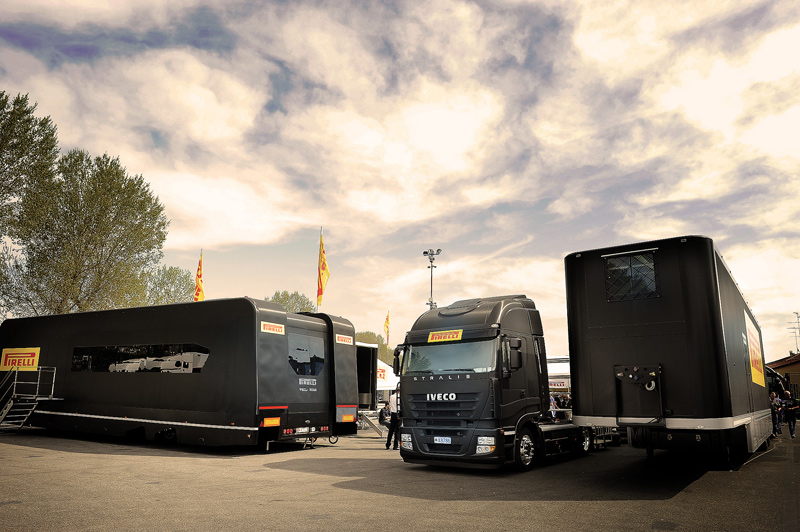 Pirelli will have a huge working area and pit set up at all round of the WSBK over the next three years
In over a decade of participation as Official Tyre Supplier, the eni FIM Superbike World Championship has enabled Pirelli to develop products which are highly appreciated by the riders and motorcyclists from all over the world. Establishing Pirelli as the undisputed market leaders.

The development work carried out by Pirelli together with the production derived Championship riders has no equal: in fact, the range of Pirelli racing tyres have travelled a total of more than 1 million kilometres in races with often extreme temperatures (from 6 to 60 Celsius degrees)

Since the beginning of the collaboration between Pirelli and the FIM Superbike World Championship, the final standings of the championship was decided five times in the last round (in 2004, 2007, 2009, 2012 and 2013) and five times in the penultimate (in 2005, 2006, 2008, 2010, 2011). Showing how since the entrance of the Italian company in the production derived series, the show and also the competitiveness has grown

In the Open Championship (pre-2004) only three manufacturers were able to earn the title in more than 16 years, during the Pirelli control-tyre years 6 of 10 motorcycle manufacturers won at least one title: Ducati, Suzuki, Honda, Yamaha, Aprilia and Kawasaki.

The intensive development implemented by Pirelli has allowed a steady improvement, year after year, with the performances offered by the tyres resulting in an average reduction of race time of 0.7 seconds per year

Many patents and innovations present in the tyres used daily by motorcyclists from all over the world are derived from the experience of Pirelli in the FIM Superbike World Championship.

Just to stay true to the philosophy that has always characterized the commitment and strategy of Pirelli in the FIM Superbike World Championship, that is the use not of prototype tyres but standard ones which are sold on the market, in 2013 Pirelli, first in the history, has abandoned 16.5 inches DIABLO‰ã¢ Superbike tyres for the new 17", a size most commonly used by motorcyclists

Thanks to the know-how and experience achieved in the top production derived Championship, Pirelli was able to become the control tyre formula in many national championships, including the British Superbike Championship, the Superstock 600 class of the Italian Championship (CIV) and the Honda Cup, the Pirelli 600 class in the France Superbike, the Superbike Series Brasil, the Stock 1000 Cup of South Africa and Costa Rica, the Supersport Series in Malaysia in addition to the BMW CUP in Germany and Spain, the Aprilia Cup in Poland, the R125 Cup in Holland and the 250 Taiwanese Cup. From 2014 Pirelli is also the sole supplier of the Australian Superbike Championship.