Next weekend the eni FIM Superbike World Championship will take the stage for the thirteenth time in Laguna Seca, California.

Pirelli, sole supplier of the Championship since 2004, will provide Superbike riders, the only class to participate in this round, two rear solutions both in soft compound and two front, in SC1 and SC2 compounds.

Jonathan Rea (Kawasaki Racing Team) heads to Laguna Seca leading the standings with a tally of 375 points in the championship, 133 more than his closest rival, his team-mate Tom Sykes. This will surely allow him to face the weekend in a more relaxed way than his rivals since he can manage such a large advantage.

The Northern Irishman so far has made a nearly perfect season winning eleven of the sixteen races and getting five second places in the remaining races. Behind him, in addition to the previously mentioned Sykes who won three races this year, there is the Aprilia standard bearer Leon Haslam and the Ducati rider Chaz Davies, both with just one win obtained in the current season.

As for the constructors' championship, Kawasaki, thanks to 14 victories and 24 podiums obtained by its riders, is firmly in the lead with 390 points followed at a distance by Ducati at 268.

Laguna Seca VS tyres: steep changes of direction and many load transfers respectively engage the front and rear tyres

The Mazda Raceway Laguna Seca, the full name of the US circuit, has almost sixty years of activity having been built in 1957.

The track is 3610 metres long and 15 metres wide with 7 left-hand curves and four right, and is located on a hillside 250 metres above sea level. In 1988 the construction of the section between turn 2 and turn 5 saw the circuit reach the minimum length required by the FIM rules.

The longest straight measures 453 metres and the track runs counter-clockwise with the rider in pole position starting on the right side.

More recently, between 2005 and 2006, some sections have not been modified to change the design of the track, but to expand the escape routes, replace the curbs, enlarge the main straight and move some protection barriers to make it safer.

Laguna Seca is undoubtedly a circuit where overtaking is very difficult because the points where a pass can be made are relatively few.

Its configuration is full of ups and downs as well as fast parts alternating with slower ones, making it a particularly fascinating circuit. Its position on a hill not far from the sea gives rise to large variations in asphalt temperature between morning and afternoon sessions, which is why in the past usually Pirelli brought for the rear both SC0 and SC1 solutions. Thanks to the work done by Pirelli to improve the range of use of the SC0 compound, this year the riders will have only soft solutions, able to perform well even if the temperatures are not so high. 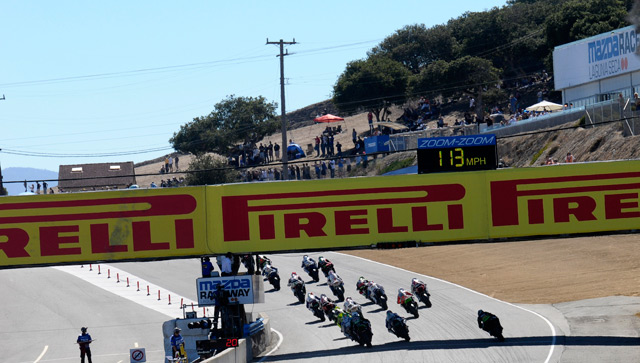 Among the variables that can play an important role, usually on Friday, the track can be dirty due to the presence of artificial sand and that early in the morning you can find a bit of mist due to the circuit being near the sea.

Analyzing the sections of the circuit in more detail, we cannot be exempt from quoting the famous "Corkscrew". This part of the circuit between turns 8 and 8a consists of a chicane situated on top of the hill that runs on a very steep slope and which usually riders cover with a speed of around 80 kms/h. In this short passage, bikes and tyres experience rapid elevation changes of direction that stress the front tyre and, at the same time, the many load transfers may affect the grip of the rear tyre.

Another point quite challenging is the short start-finish straight which has two light changes of direction where the maximum speed of about 270 kms/h is reached while to do the right curves 3 and 4 allows you to get a good lap time.

The Pirelli solutions for the Superbike class:

In occasion of this overseas round, Pirelli brought a total of 1435 tyres, all destined for Superbike riders, the only class running at Laguna Seca.

Each rider can count on 28 front and 29 rear tyres, on the understanding that for regulation they will not be able to use more than 24 (10 front and 14 rear) tyres for the entire race weekend (Friday to Sunday).

Two dry solutions for the front and as many for the rear are joined as usual by intermediate and wet tyres and by the rear qualifier tyre, one for each rider to be used only during the Superpole of Saturday.

At the front the development SC1 S1699, which debuted successfully at AragÌ_n in 2014 has been brought to every round this year because it offers greater support in the approach to turns in favor of a better steering precision. The standard SC2, is ideal for high external temperatures because it guarantees solidity and support to the tread band.

At the rear the standard SC0, offers maximum tread contact on smooth asphalt and maximum traction development at high temperatures, as well as higher resistance to thermal performance decay. The development SC0 T0611, which debuted in Imola and was also used in PortimÌ£o and Misano uses a very soft compound which is able to offer a very high level of grip when used with high temperatures.

The 2014 Pirelli statistics for Laguna Seca: