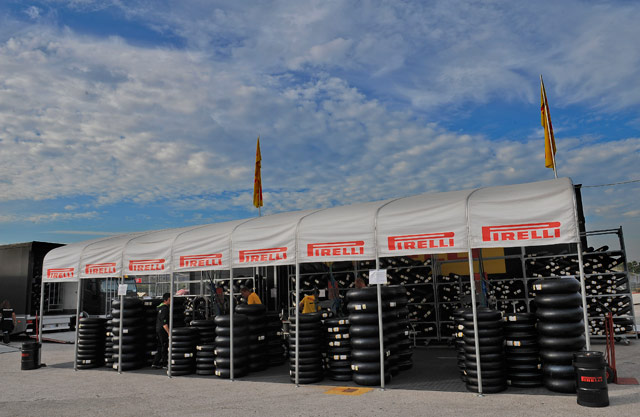 After the summer break of almost two months the riders of all classes of the eni FIM Superbike World Championship are ready to return to action next weekend, at the Spanish circuit of Jerez de la Frontera, for the third to last round of the season.

Alongside them; Pirelli, as the official supplier of all classes of the Championship, will provide as usual, different solutions of slick and treaded tyres.

In particular, in the Superbike class, the riders of the EVO category will be able to count on a new soft development solution, the T1102, which in comparison to the standard SC0 should ensure a greater consistency of performance, lap after lap, and has been designed as a further development of the T0722 solution that had immediately success at its debut in Misano.

The fight, however, seems now a two-way fight with the Englishman riding for the Akashi company aiming for his second world title and the Frenchman, who seems to be the only one capable of resisting it. Even in the manufacturers Championship the battle is between Kawasaki, with 342 points, and the Noale factory 24 points in arrears.

In the Supersport class, the Dutchman Michael VD Mark (PATA Honda World Supersport) seems well on the way to winning the Championship having 53 points advantage on the Frenchman of MV Agusta Jules Cluzel and 67 over Florian Marino (Kawasaki Intermoto Ponyexpress).

Jerez Vs tyres: an aggressive asphalt that requires rear grip

The circuit of Jerez de la Frontera, located in southern Spain, near Cadiz, was opened in 1985 and initially measured 4218 metres, then after some changes has become longer and faster. It is now 4423 metres long, of which 69% (3038 metres) consists of the straights, while the remaining 31% (1385 metres) are curved. The track width is 11 metres, apart for the finish straight which is 600 metres long and has a width of 12 metres.

For the riders Jerez, like Assen, is considered a reference track because it has been structured in a series of low, medium and fast speed curves that are ideal for the development of the machine, this explains why Jerez is often chosen by the teams to make their own private tests.

Precisely because of this variety of the turns, the rear tyre will reach levels of stress fairly balanced between the right and left side and although the lateral loads generated during the race are not very high, in order to meet the different needs of the track you need a rear tyre with a good balance of handling and support whilst leaning.

The Pirelli tyre range will have no difficulty in dealing with this track even in the case of high temperatures, such as those that may be encountered at the beginning of September. This despite the fact that the asphalt of Jerez is composed of a quite aggressive grainy surface that in some cases might accentuate abrasion or create uneven wear on the rear, especially if soft compounds are used.

The track requires a good level of grip at the rear and the solutions brought are more protected from cutting and tearing mechanical stresses. The bumps are due to the undulations of the asphalt in addition to requiring a bike which is stable under braking, will require tyres able to absorb the roughness of the asphalt, shilst remaining smooth in the faster corners.

Pirelli solutions for the Superbike class:

Pirelli arrives to Jerez de la Frontera with a load of 4882 tyres that meet the needs of the riders of the 5 five classes of the Championship. Of that amount 2094 are the tyres destined to Superbike riders, 1560 for Supersport, 464 are available for the Superstock 1000 riders as well as 540 for those of the Superstock 600 and 224 for the European Junior Cup.

In the Superbike class every rider can choose between 38 front and 34 rear tyres, including DIABLO‰ã¢ Superbike slick tyres, intermediate DIABLO‰ã¢ Wet tyres and DIABLO ‰ã¢ Rain tyres for full wet.

Among the slick tyres, 4 solutions provided at the front and the same amount for the rear.

At the front the riders will have as usual at their disposal the standard SC1 and SC2, respectively in medium and hard compound, which will be joined by two development solutions: the S1699, an SC1 compound tyre that successfully debuted at AragÌ_n and was then the most popular solution at Assen, Imola, Donington, Misano, PortimÌ£o and Laguna Seca because it offers greater support in the approach to the curves in favour of a better steering precision; and the T0020, which uses a compound which in terms of hardness is positioned midway between the SC1 and SC2 (and has so far only been brought to the test of Imola and to the round of Misano). This last solution should provide more grip than the standard SC2 while having more robustness than the standard SC1.

At the rear, in addition to the excellent standard SC0, in soft compound and ideal in case of the track temperature is not too stiff, riders can choose between the SC1 development solution S1185 -initially available only for the Superbike riders but starting from PortimÌ£o also available for EVO riders; and the one exclusively dedicated to each class: for the Superbike riders the T0722, (the first SC0 solution dedicated exclusively to the Superbike class which saw its debut at Misano) and should appear more consistent than the standard one. For the EVO category there will be the new T1102, a soft tyre that should ensure a greater consistency of performance lap after lap. For Superpole there will of course be the qualifier tyres in supersoft compound, in this specific case the T0223 already seen in action at Misano and Laguna Seca.

For the FIM Supersport World Championship, 3 DOT DIABLO‰ã¢ Supercorsa front and 2 rear solutions, as usual with the possibility of being able to use the intermediate and full wet tyres if necessary.

At the front the standard SC1 and SC2 will be joined by the S1485, a development solution in SC1 compound which debuted at Misano and has also been taken to PortimÌ£o and which should ensure greater support in the approach to the curves in favour of a better steering precision. At the rear the SC0, standard soft solution, and the T0813, still in a soft compound but featuring a profile already being used in Australia this year and last year in Jerez and Istanbul. The latter solution debuted in PortimÌ£o and should be able to keep the rubber cooler because it is especially designed to work at high temperatures.

In the Superstock 1000 and 600 classes and in the European Junior Cup all riders use the DIABLO‰ã¢ Supercorsa tyres and, if needed, they will be able to rely as usual on intermediate DIABLO‰ã¢ Wet and full wet DIABLO‰ã¢ Rain tyres.