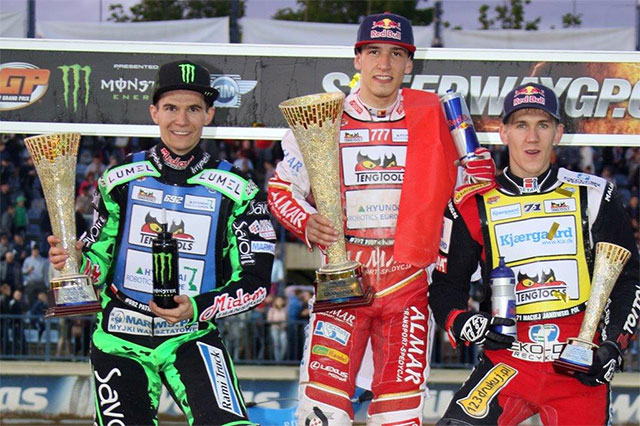 Polish star Piotr Pawlicki admits a winter of hard work earned him room to relax as he stormed to his first ever FIM Speedway Grand Prix win at the Rietumu Bank Latvian SGP in Daugavpils on Saturday.

The Leszno-born racer led a sensational Polish one-two-three as he was joined on the podium by runner-up and new World Championship leader Patryk Dudek, with Maciej Janowski defying a horrifying crash to claim third.

The night belonged to Pawlicki, who was unstoppable in his final five rides at Lokomotiv Stadium as he piled up 18 points to move up to sixth in the standings.

Rider No.777 was positively stunned by his first SGP win, but was pleased to see a winter of hard graft by him and his team pay off in style.

"It‰Ûªs an amazing day for me," Pawlicki beamed, "It‰Ûªs the first time I have won a GP. I was third last year in Malilla, but I won today and I can‰Ûªt believe what has happened.

‰ÛÏI want to say thank you to my team. They are always working hard on my bikes. If you have a fast bike, you are more relaxed. If you have slow bikes, you must think ‰Û÷what‰Ûªs happening? What must I do to be better?‰Ûª So this was a very nice day for me.

‰ÛÏBefore the meeting I felt really, really very good. I was always smiling and the team was saying ‰Û÷what‰Ûªs happening?!‰Ûª Maybe I was a little more relaxed.

‰ÛÏI worked hard all winter, training with my trainer Tomasz Skrzypek. He comes to every meeting with me and he‰Ûªs helping me. I want to thank him too.‰Û