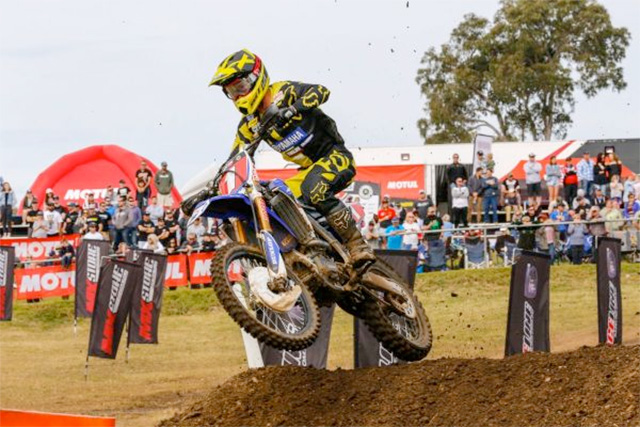 It was yet another Thor MX1 round victory in the books for CDR Yamaha‰Ûªs Dean Ferris who went undefeated at Round 8 of the Motul MX Nationals at Port Macquarie today.

Strong crowds turned out to watch the fastest riders in the business go to battle at Port Macquarie today, but it was Ferris who left with plenty of reason to celebrate, recording a perfect round of racing as the series reaches the pointy end of the championship.

The Thor MX1 category had at total of 30 minutes on the clock for their practice and qualifying session ahead of racing this morning, and despite being a brand new track for the premier class, it took no time at all for the heavy hitters to settle in.

Ferris showcased his speed from the get go, but it was on lap five that he set the fastest qualifying time, a 1:45.604, a time that couldn‰Ûªt be matched during the remainder of the session. Second fastest on track was KTM‰Ûªs Luke Styke (1:46.262) followed by team mate Kirk Gibbs who was third quickest with a 1:46.463 hot lap. Behind the top three were Crankt Protein Honda Racing‰Ûªs Luke Clout and MEGA Bulk Fuels Monster Energy Kawasaki‰Ûªs Brett Metcalfe, with all five riders then progressing through to GoPro Superpole.

With GoPro Superpole marking the first points paying event at Port Macquarie, riders were determined to leave nothing on the track during their individual hot laps, but it was CDR Yamaha‰Ûªs Ferris who snatched up his fifth Superpole win for 2017, as well as three all important championship points. 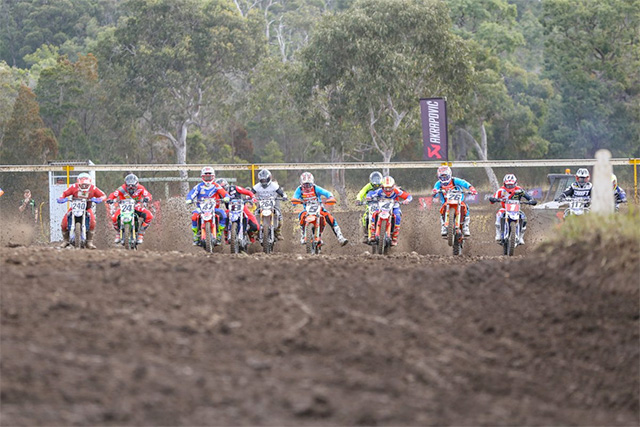 After collecting yet another GoPro Superpole victory prior to moto one, Ferris took to the line at Port Macquarie with one goal, to leave undefeated.

When gates dropped and riders stormed into the first turn it was DPH Motorsport‰Ûªs Kade Mosig who snatched up the Raceline holeshot, however in what has become tradition throughout 2017, it was Ferris who was nipping at his heels.

It only took half a lap for the MX1 Championship points leader Ferris to gain control of the moto, moving in to the lead position and relegating Mosig to second. Behind Mosig was Nathan Crawford, followed by fellow rookie Honda mounted Clout in fourth.

After only two laps, Ferris had pulled a comfortable three second lead on his competitors, allowing the battle for all further positions to happen behind him. And battle they did, with names such as Todd Waters, Kyle Peters, and Kirk Gibbs just outside the top five, the remaining laps proved to be some of the best of the season.

After eight minutes on the fresh new circuit, Ferris began to separate himself from the field, and simply school the competition. Behind him Mosig, Crawford, Clout and Waters were locked into the fight for remaining top positions, keeping the thousands of spectators on the edge of their seats.

Surprisingly one man who was notably absent from the top five was Brett Metcalfe. After eight laps on the forever changing circuit, the newly drafted Kawasaki rider was back in ninth position after going down at the beginning of the moto.

When the MX1 class reached the halfway mark, rookie Kawasaki rider Crawford put the foot down, registering the fastest lap time which allowed him to close in Mosig. Another rider who found his form later in the moto was Waters. The Crankt Protein Honda Racing Team rider made a pass on his team mate Clout to move up to fourth position ‰ÛÒ just shy of the MX1 podium with a handful of laps remaining.

As moto one reached it‰Ûªs closing stages there had been little change to positions, however Waters had closed the gap on Crawford and was beginning to pose a threat to the Kawasaki rider with only two laps remaining.

But it was Ferris who collected the chequered flag victorious for the 12th time this season in race one ‰ÛÒ a task he‰Ûªs grown accustomed to throughout 2017. Second place in race one went to Mosig, followed by Crawford who managed to hold off Waters to finish in third. 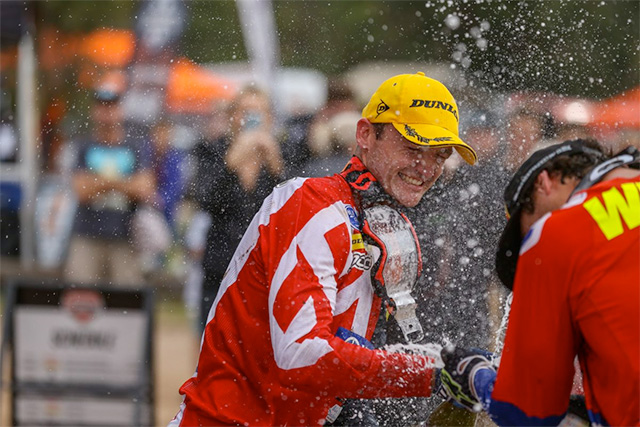 In the second moto for the Thor MX1 class, Clout secured the holeshot, however the attention quickly shifted to the pile up in the first turn with the likes of Mosig and Gibbs just two of the riders caught up in the carnage.

Much like in moto one, Ferris started in second behind the race leader, however after less than a lap the CDR Yamaha rider once again gained control of the moto, moving into the lead and relegating Clout to second.

After two laps, heavy hitters Gibbs, Peters and Mosig were all well outside the top ten, meaning riders needed to capitalise on the time remaining in order to maximise points.

With Ferris out in front and continuing to stretch out his lead, Clout soon began to feel the pressure from his teammate Waters, however Waters also had his hands full thanks to Kawasaki‰Ûªs Metcalfe who was out for redemption after a difficult first moto.

But it was Waters who managed to find the perfect spot to execute a pass on his teammate, the Queenslander moving in to second position, and leaving Clout to fight off Metcalfe behind him.

As moto two progressed, Metcalfe began putting significant pressure on his rookie competitor, the pair providing plenty of entertainment for the crowd who continued to dot the fence line.

By the halfway mark Ferris was again untouchable out in front, Waters continued to maintain second from Metcalfe who had found his way past Clout. Clout was then pushed down to fourth ahead of Styke, CDR Yamaha‰Ûªs Dylan Long, Gibbs and Crawford.

As the Thor MX1 class reached the closing stages of their final moto, there had been little change to positions, Ferris maintaining control of the race from Waters and Metcalfe.

And when the chequered flag flew for the final time, it was Ferris who collected an incredible 13th race victory. Second place went to Honda mounted Waters, followed by Metcalfe who held on for the 30 minutes to eventually cross the finish line in third. Clout and Gibbs finished in fourth and fifth places respectively, followed by Styke, Long, Crawford, Peters, and Mosig who completed the top ten.

‰ÛÏThe feeling of winning doesn‰Ûªt wear off, it feels just as good every time, I love it, this is what I work for,‰Û