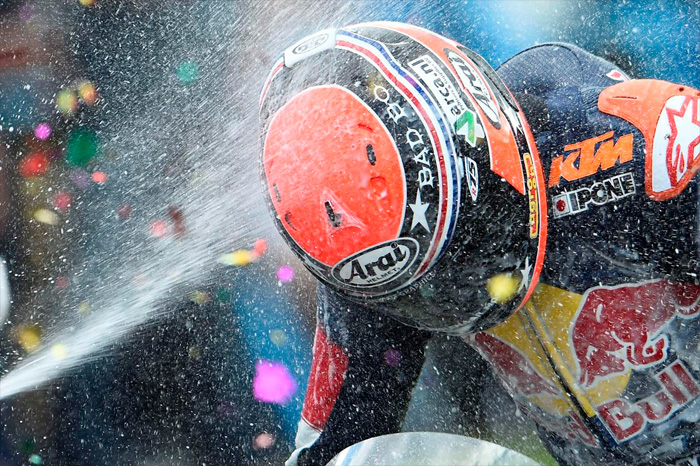 A Dutch TT double for Bo Bendsneyder making it four Red Bull MotoGP Cup wins in a row for the 16-year-old Dutchman.

Unlike Friday's Race 1 where he had to fight to the line with Italian 16-Year-old Fabio Di Giannantonio, this time he built a clear advantage that grew to 3 seconds.

It was still Di Giannantonio second but this time he was scrapping with Oscar Gutierrez and Enzo Boulom for the rostrum places. That was only decided at the final corner with 15-year-old Spaniard Gutierrez across the grass to claim third leaving Boulom a slightly frustrated 18-year-old Frenchman just off the podium.

Bendsneyder won last year's Race 2 at Assen, also from pole, and he was the class act of the weekend heading all practice sessions on the KTM RC 250 R.

‰ÛÏI want to thank the fans for their support, it was fantastic to see so many of them staying to watch our race. I had to push hard right from the start as I didn't want a battle all the way like yesterday. I just kept concentrating on putting in the laps as perfectly as I could.‰Û