Pedrosa Wins In Sepang As Tension Builds Between Rossi and Marquez 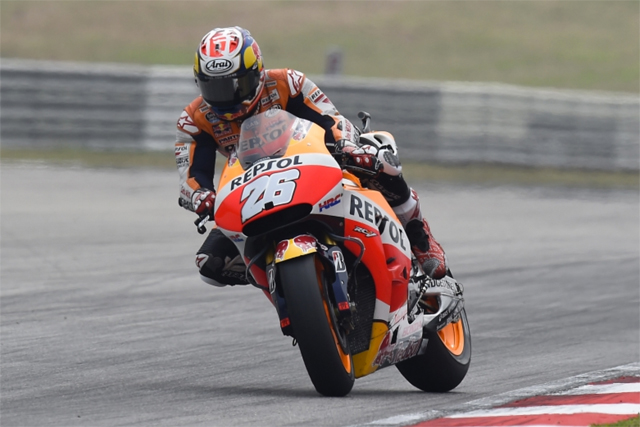 While Pedrosa won the race, all the talk directly after the finish was about a incident between championship leader Valentino Rossi and Marc Marquez after Marquez was left on the ground in an incident that has left Rossi with a penalty that will see him start at the rear of the field at the season finale and penalised three championship points.

Rossi will now head into the seasons final race with a narrow seven point lead in the championship standings over Yamaha team-mate Jorge Lorenzo.

Lorenzo finished second in Sepang one position ahead of Rossi, allowing the Spaniard to close up the point a little further as the season comes to an exciting climax at Valencia.

While most of the attention was focused on Rossi and Marquez, Pedrosa's win was emphatic proof of the former 125 and double 250 World Champion‰Ûªs return to full fitness and top-of-the-class form, after having to withdraw at the start of the season for arm-pump surgery. The factory Honda veteran of ten years missed three race and was still recuperating when he returned.

He qualified on pole position for this race, the fourth time he has done so at Sepang. Seizing the lead into the first corner, he was never headed, eventually crossing the line 3.6 seconds clear of second-placed Jorge Lorenzo (Yamaha). It was his third MotoGP win here among seven podiums, plus two more wins in the smaller classes.

Victory in Malaysia follows an equally masterful first win of the season (the 50th of his career) two races ago at Motegi in Japan. It also gained him one more championship place: now lying fourth, after having been as low as 15th on his return from surgery.

‰ÛÏI am very happy because it was a very nice Grand Prix!" Pedrosa said. "We had a good feeling from Friday, we were able to manage the weekend well and above all we had a bike that worked very well during every practice.

"The setup we used at this circuit in February during testing helped me a lot and I‰Ûªm very happy to take this win for my team, who have been behind me all the way. I am especially pleased to finish the season very positively, as it has been a hard year but we are now recovering well and we‰Ûªre in good form.

"Australia is always the hardest race of the year for me, but that turned out fine and I‰Ûªm really glad we completed the flyaways like this.‰Û 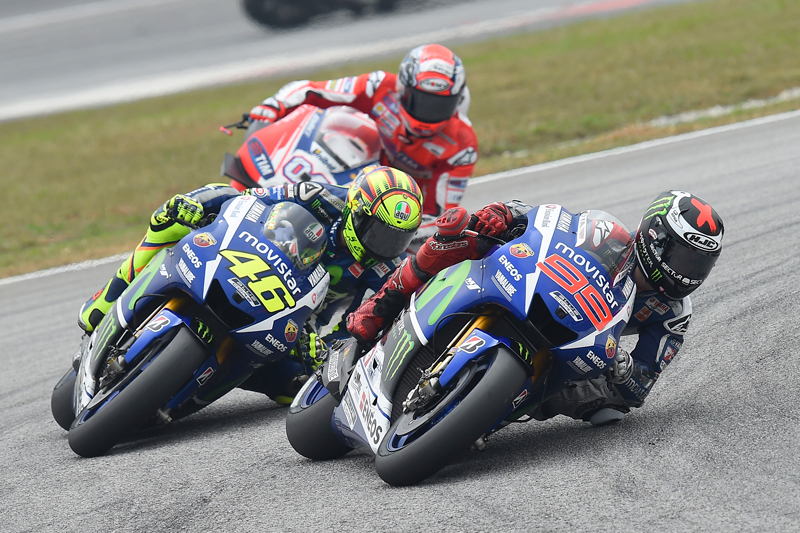 Jorge Lorenzo
Jorge Lorenzo was happy with his second place finish and is looking forward to having the opportunity to fight for the 2015 title in a couple of weeks time.

"It was a very hard race." Lorenzo said. "I gave the maximum to keep Dani's rear wheel as close as possible, but to be honest his pace had been unbelievable. He was so quick and consistent and picked up the bike in a perfect way, so it was very difficult to overtake him on braking.

"I could only finish in second place, which is important because we recovered points. When I saw the battle between Marc and Valentino I was really surprised because the action was huge and I have to respect race direction's decision." 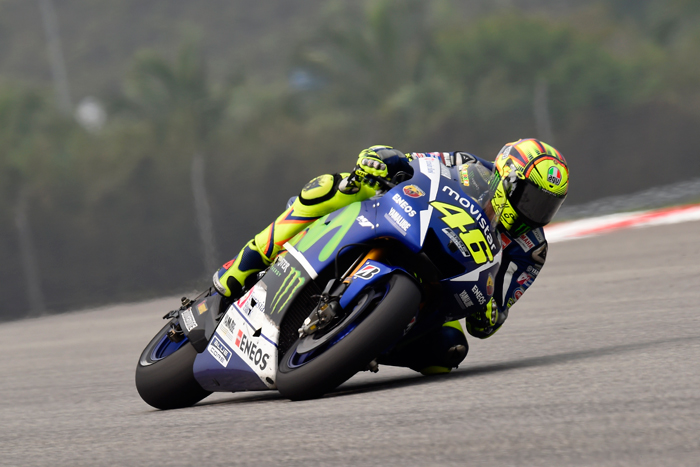 Valentino Rossi will start from the back of the grid in Valencia
For Rossi he is understandably not impressed with the penalty handed down to him and is now more convinced that Marquez's number one goal at the moment is to do everything he can to derail his hopes of the 2015 title.

"Marquez knows it wasn't red mist that caused the incident." Rossi stated. "It's very clear from the helicopter footage that I didn't want to make him crash, I just wanted to make him lose time, go outside of the line and slow down, because he was playing his dirty game, even worse than in Australia.

"When I went wide and slowed down to nearly a stop, I looked at him as if to say 'what are you doing?'. After that we touched. He touched with his right underarm on my leg and my foot slipped off the foot peg. If you look at the image from the helicopter it's clear that when my foot slipped of the foot peg, Marquez had already crashed. I didn't want to kick him, especially because, if you give a kick to a MotoGP bike, it won't crash, it's very heavy.

"For me the sanction is not fair, because Marquez won his fight. His program is OK because he is making me lose the championship. The sanction is not good, especially for me, because I didn't purposefully want to make him crash, I just reacted to his behaviour, but I didn't kick him. You can't say anything in the press conference, maybe it changes something, but to me this was not fair, because I just want to fight for the championship with Jorge and let the better man win, but like this that's not happening.

"Like I said, I didn't want to make Marquez crash, but I had to do something because at that moment Jorge was already gone. The championship is not over yet, but this sanction cut me off by the legs and made Marquez win." 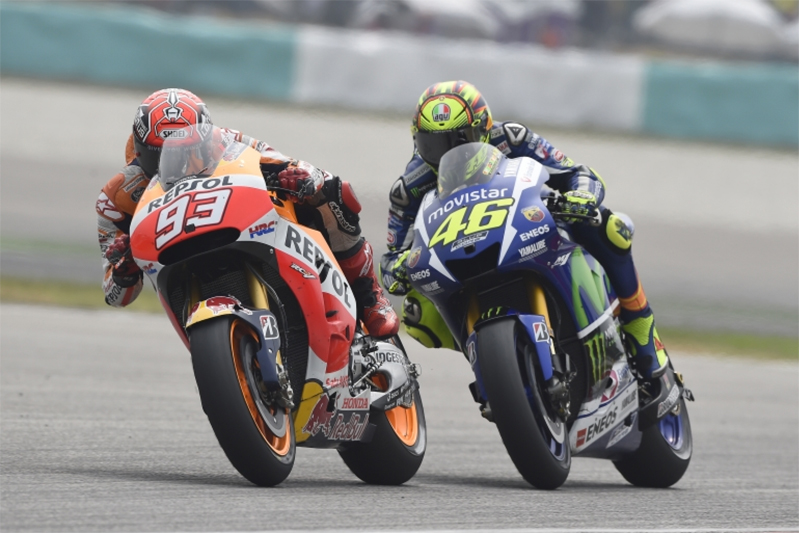 Marc Marquez
As expected Marquez‰Ûªs views of the incident are a little different from Rossi's, stating that the Italian did indeed kick his bike causing him to crash.

‰ÛÏWe were having a good race up until the incident." Marquez commented. "At the beginning I made a mistake, but then I regained confidence. Valentino overtook me, I followed him for half a lap, and I saw that I could go faster than him, so I tried to overtake him back.

"We started a fight between us and I always passed without making any contact with him. At Turn 14 he passed me on the inside, I sat the bike up, he kept going straight ahead and I saw him looking at me. I didn‰Ûªt know what to do. Then he kicked out at me, knocking my brake lever, and I crashed.

"I will leave the sanction in the hands of Race Direction. All I know is that I scored zero points and ended up in the gravel, but thankfully I‰Ûªm fine. Both what Valentino said to Race Direction and what he did on the track has made me disappointed.

"I‰Ûªve never seen anything like it: a rider kicking another rider. It might be down to nerves, but I want to try to forget about all this and the important thing is that I‰Ûªm fine physically. I hope, for the sake of the sport that this ends here.‰Û 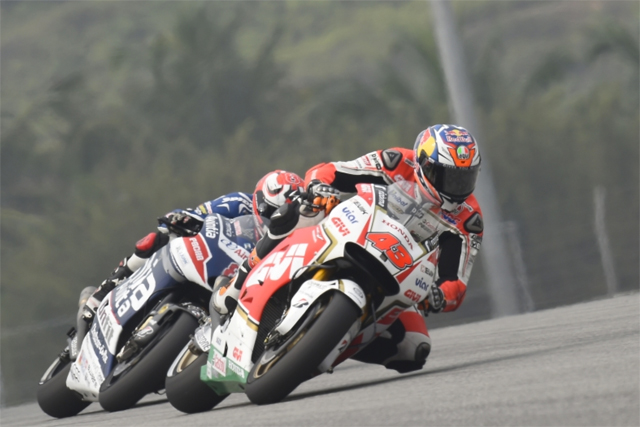 
Top Image: Dani Pedrosa on his way to the win at Sepang