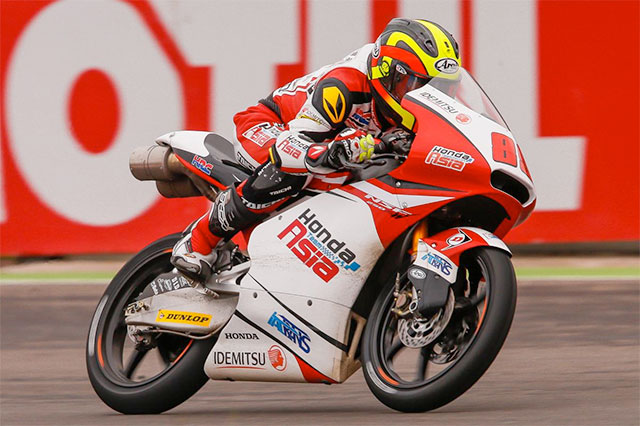 In just his third World Championship race, Khairul Idham Pawi charges to an unbelievable victory in the Argentina GP

The Moto3‰ã¢ World Championship race in Argentina was declared a wet race, the surface of the track somewhere in between wet and dry. All riders came to the grid on wet tyres, but some thought that slicks would be the best option. The Termas de Rio Hondo is a track with high grip levels, the situation reminiscent of the 2015 Indianapolis GP. It was tense on the grid as a number of riders weighed their potential options, all riders hiding their tyre choice until the final seconds.

Livio Loi (RW Racing GP BV) was the only rider to opt for wet tyres, the rest of the field, hoping the track would improve and that they could keep heat in their tyres, chose to run with slicks.

Starting from pole position for the first time in his career, Brad Binder (Red Bull KTM Ajo) made a solid start. But it was Romano Fenati (Sky Racing Team VR46) who shot into the lead, the only rider on the front row who started on a dry patch of tarmac. His lead would not last as Khairul Idham Pawi (Honda Team Asia) shot ahead and quickly opened up an advantage of over half a second by the middle of the first lap.

But with wets fitted, Loi was in hot pursuit out the front, able to push immediately. His plan was clear: sprint ahead while the track was wet and attempt to defend his lead if the track dried. Loi tagged onto the back of Pawi as the duo charged ahead, four seconds in front of the rest. Pawi‰Ûªs performance was almost unbelievable given the fact he was on slick tyres, Loi unable to stay with the Malaysian‰Ûªs demonic pace.

Adam Norrodin (Drive M7 SIC Racing Team) was able to break away from the chasing group as well, three seconds ahead of Andrea Locatelli (Leopard Racing) who was in fourth. For both Pawi and Norrodin, this was just their third and second race in the World Championship. As the pack battled away behind, Pawi set fastest lap after fastest lap, consistently three seconds faster than everyone else on track.

Championship leader Niccolo Antonelli (Ongetta-Rivacold) found himself outside the points with 18 laps to go in 17th, his title rival Brad Binder staying steady inside the top ten, involved in the battle for fourth.

With 15 laps to go Adam Norrodin slipped past Livio Loi, the pair swapping positions for several corners as Pawi continued to set fast laps, his lead now 20 seconds. The battling of Norrodin and Loi allowed Jorge Navarro (Estrella Galicia 0,0) to catch them, he and Norrodin able to wrestle past Loi. With a third of the race gone, Loi was clearly struggling with his wets on the rapidly drying track.

However, the rain flag came out again soon after. This didn‰Ûªt deter Navarro and Norrodin as the two continued to swap positions. With the race now in a more or less stable rhythm, Binder began to pick his way through the field and found himself up in fourth as the middle of the race approached.

The rain flags offered Loi no relief, the Belgian rider dropping back with each lap. All forged ahead, Pawi given multiple warning signs that he was near the limit as his bike bucked beneath him. Still the lap times came, Pawi setting a 1‰Ûª58.127s, the fastest lap of the race at that stage, with 11 laps to go.

Positions continued to change behind him, Antonelli fighting into the points as the likes of Fenati and teammate Nicolo Bulega (Sky Racing Team VR46) dropped outside the top 20.

The battling raged behind, Brad Binder and Joan Mir (Leopard Racing) charging into the top five. Fourth produced a stunning battle with the likes of Binder, Locatelli and Mir all trading places. Unfortunately Aron Canet (Estrella Galicia 0,0) suffered a fall at Turn 7 as he attempted to stay with the other riders. Meanwhile Navarro and Norrodin were locked together, Navarro‰Ûªs experience allowing him to just remain ahead until midway through the final lap.

After an almost unbelievable race, Pawi would cross the line a staggering 26.170 ahead of Jorge Navarro. Navarro and Norrodin‰Ûªs battle would go down to the penultimate corner, Norrodin high siding as he tried to do everything he could to end second. This promoted pole man Brad Binder to third, continuing his 100% podium record in 2016.

Pawi is the first Malaysian rider to take a Grand Prix victory, doing so in just his third race on the world stage.

Norrodin stood up and pushed his bike across the line for 11th, drawing applause from all those in the crowd and pit lane.

Brad Binder takes the lead of the Moto3‰ã¢ World Championship with 36 points.