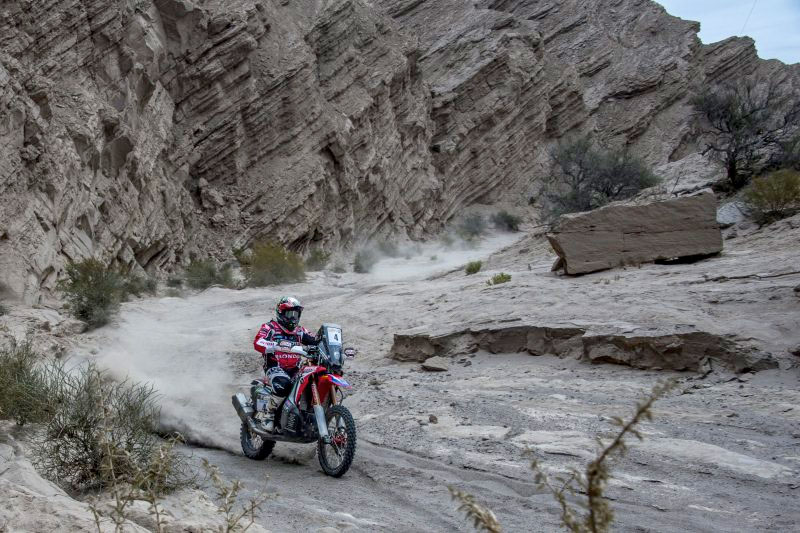 Price rode a stunning fifth stage of the fourth round of the FIM Cross-Country Rallies World Championship finishing over three minutes ahead of GonÌ¤alves but after seventeen hours in the Argentine desert came up agonisingly short and had to settle for the runner-up position in the rally‰Ûªs overall standings. Matthias Walkner posted the third fastest time on the stage but dropped to fifth after incurring an eight-minute penalty at the finish. 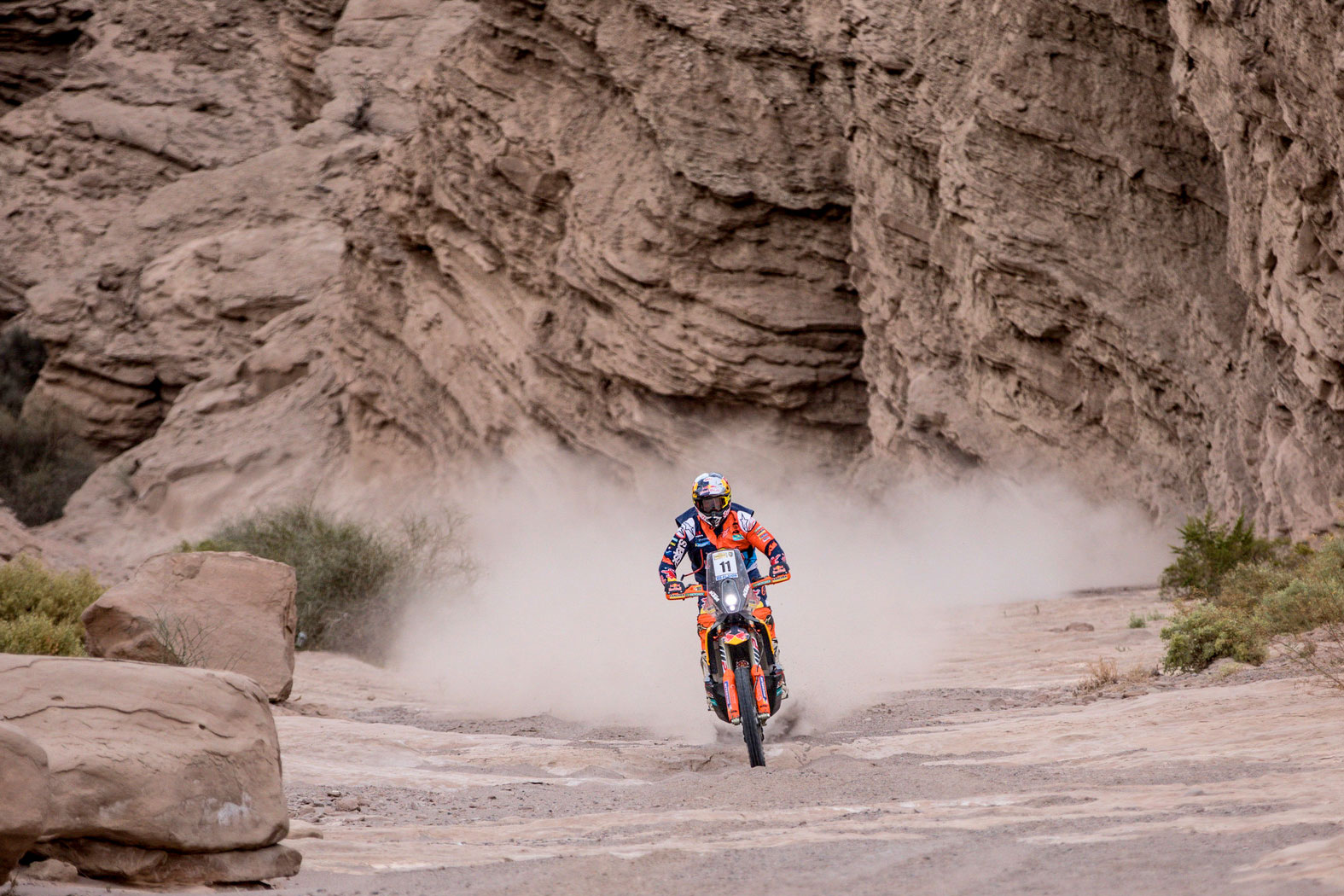 Aussie Toby Price fell 6 seconds short of victory but has moved into second in the 2018 FIM Cross-Country Rallies World Championship. Photo: RallyZone - Edoardo Bauer.
With stage five of the rally comprising some of the most varied terrain seen so far, the final day‰Ûªs racing was always going to be one of the most vital. Despite being the shortest at 200.48km, Friday‰Ûªs timed special still threw up a few surprises for the competitors with its mixture of sandy trails, river beds and salt flats.

Toby Price was second away this morning on the route from Villa Union to the finish at San Juan. Disappointed not to have taken the win, the 2016 Dakar Champion was still extremely happy with how his rally had gone.

‰ÛÏToday was great. We pushed right from the start to try and make up the time to Paulo (Goncalves). Everything went well on the stage; the bike was good and I was really pleased with my riding," Price said. "I tried my best but unfortunately it wasn‰Ûªt quite enough and I lost out on the overall by the smallest of margins. All-in-all the rally has been good, the team have once again done an excellent job and our performance has been really consistent over the last couple of races here in South America. We've earned some good points for the championship, so we‰Ûªll see what happens at the final round.‰Û 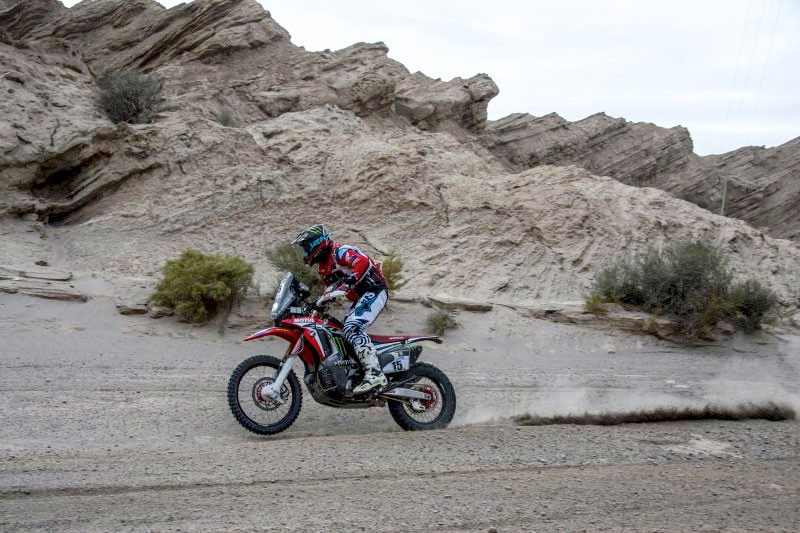 American Ricky Brabec put on a strong showing with his Monster Energy Honda Team to finish third on the final stage and fifth overall. Photo: RallyZone - Edoardo Bauer.
Ricky Brabec finished in fifth overall position, with the American taking the fourth fastest time on the day, some five minutes behind Price.

"The rally is over. The team did a great job. I‰Ûªm happy to be here in San Juan. The day for me was okay. It was a really fast day with not so much navigation, which made it that much quicker," Brabec explained. "We were riding for two hours or maybe two-and-a-half hours. We‰Ûªre looking forward to the next rallies and we are particularly excited about Peru next weeks. We‰Ûªll make a push for Dakar. I want to give also a support message to our injured riders in this race: Kevin and Mathias Bellino." 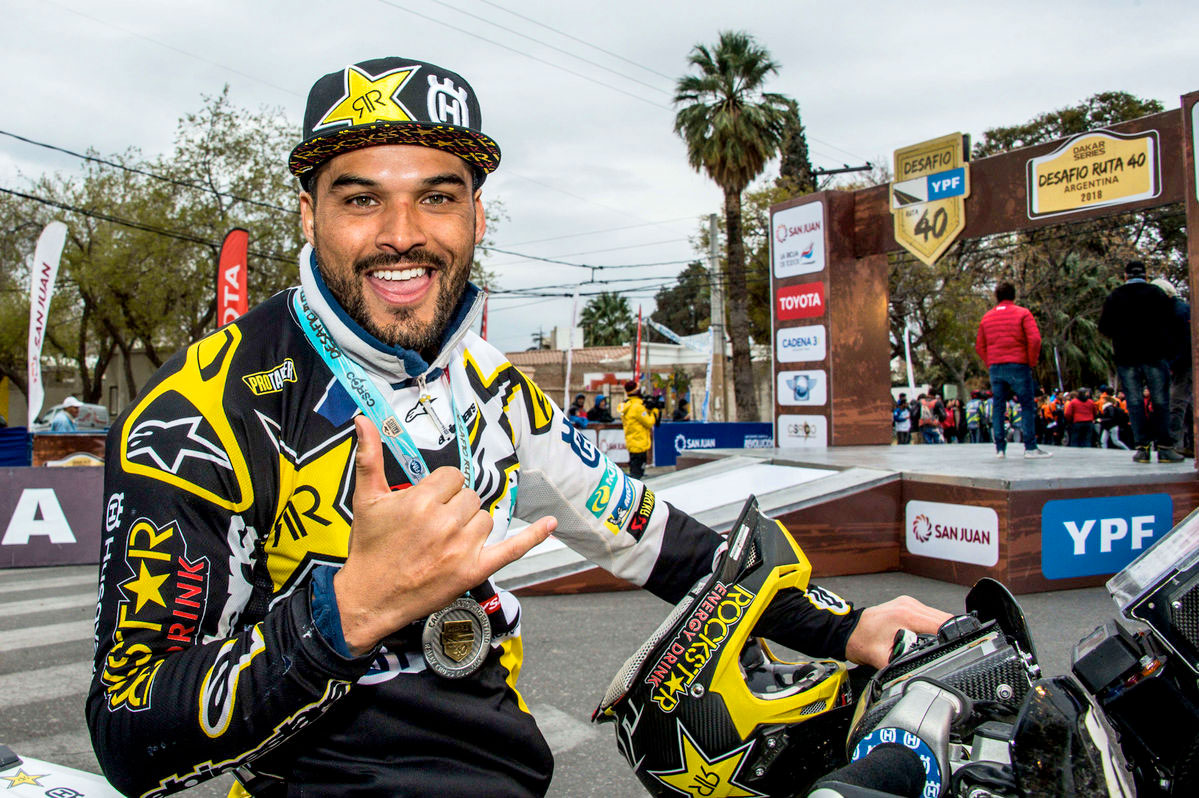 ‰ÛÏI did my best battling for the overall podium today and it was a great relief to learn that I made it," Quintanilla said. "We raced through some sandy terrain and it was hard to make up time to the leading group of riders. There were times I wasn‰Ûªt feeling comfortable to push, so I decided to keep it steady, avoid mistakes and bring my Husqvarna to the finish of this exhausting rally. Getting on the box here in Argentina is a great result that gives me the points I need to get a clear lead in the championship. We now have one more round to go ‰ÛÒ the Morocco Rally in October ‰ÛÒ and I will do my best to defend my title for a third consecutive season.‰Û 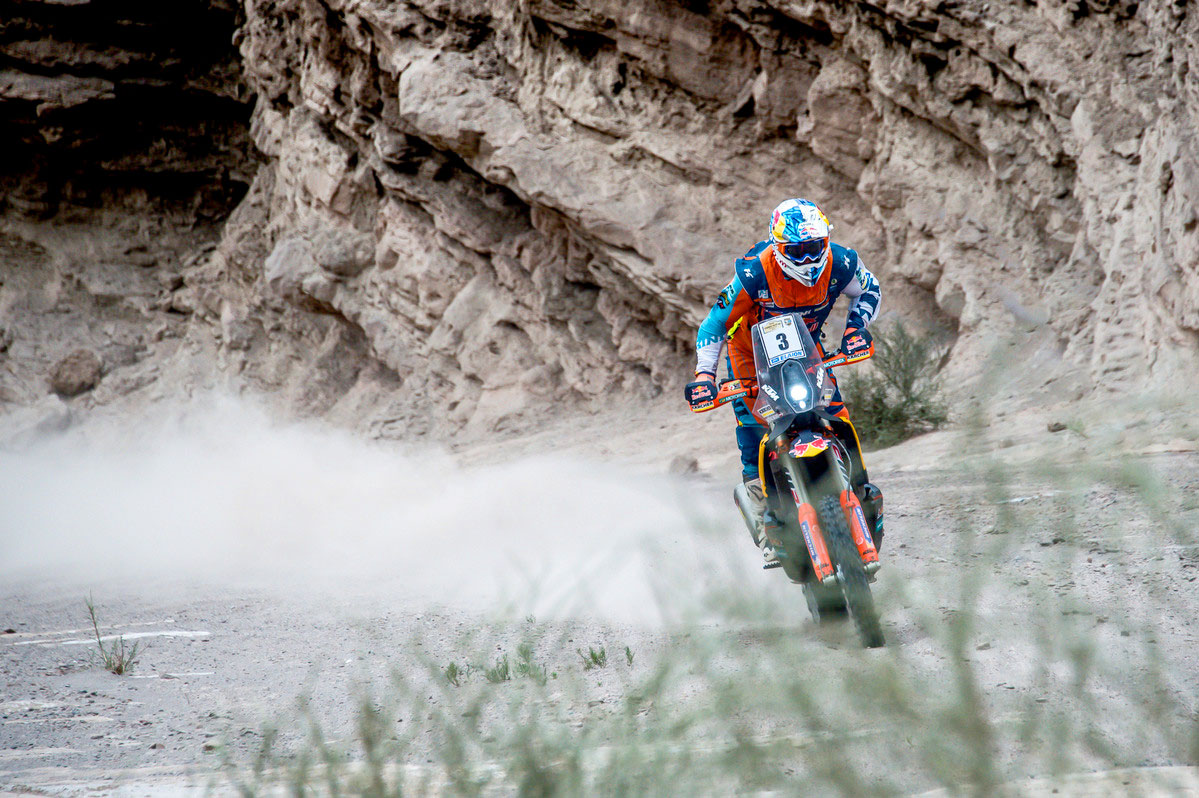 ‰ÛÏStage five was really cool, I enjoyed it a lot," Walkner said. "There were some nice pistes but also about 30km of riverbeds so we had to take care there. I tried to push as hard as I could where it was safe but made a small mistake on the road book and that‰Ûªs where Toby caught me. Other than that, I know my pace was really good and I‰Ûªm happy with how my bike is performing. It‰Ûªs unfortunate to receive the penalty as it has cost my place on the podium." 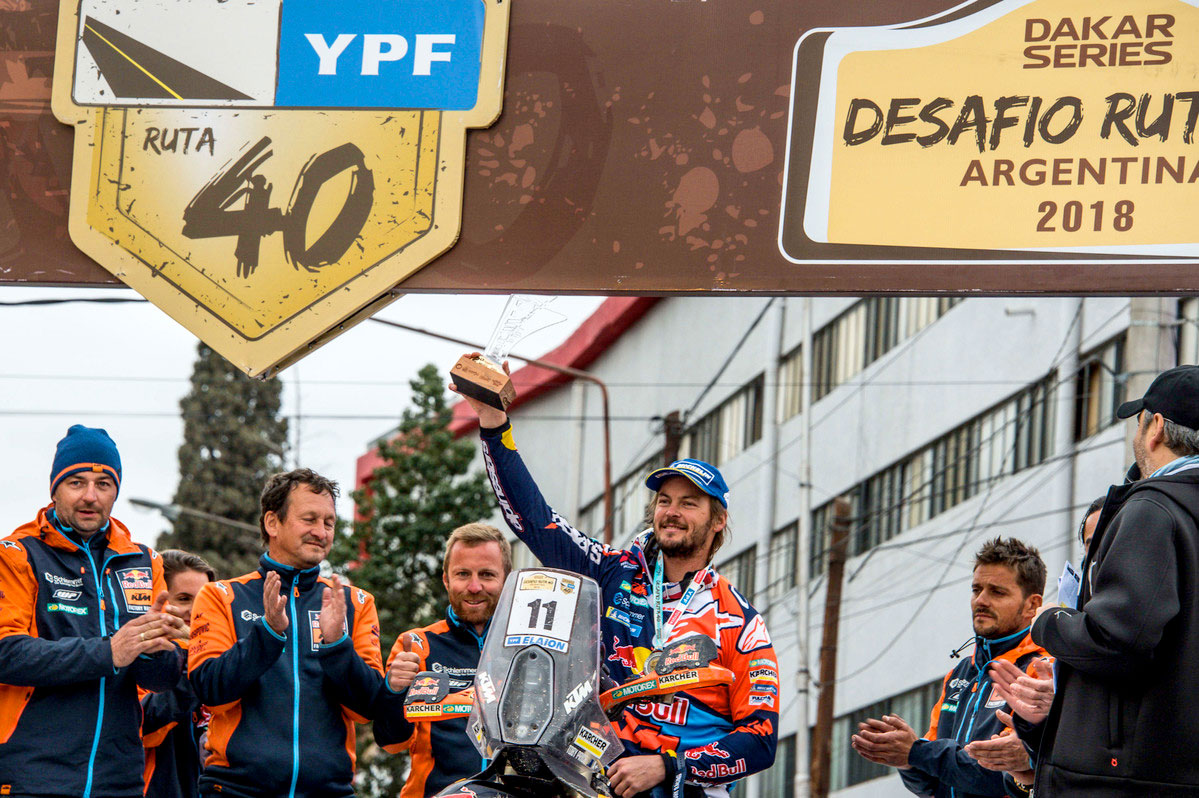 Australian Toby Price added another trophy to his already growing trophy cabinet. RallyZone - Edoardo Bauer.
Pablo Quintanilla is now leading the 2018 FIM Cross-Country Rallies World Championship standings by eight points over second-placed Toby Price. Failing to finish outside the top-three in any of the events he has contested this year, the Chilean will head to the season finale in October determined to become the 2018 World Champion. 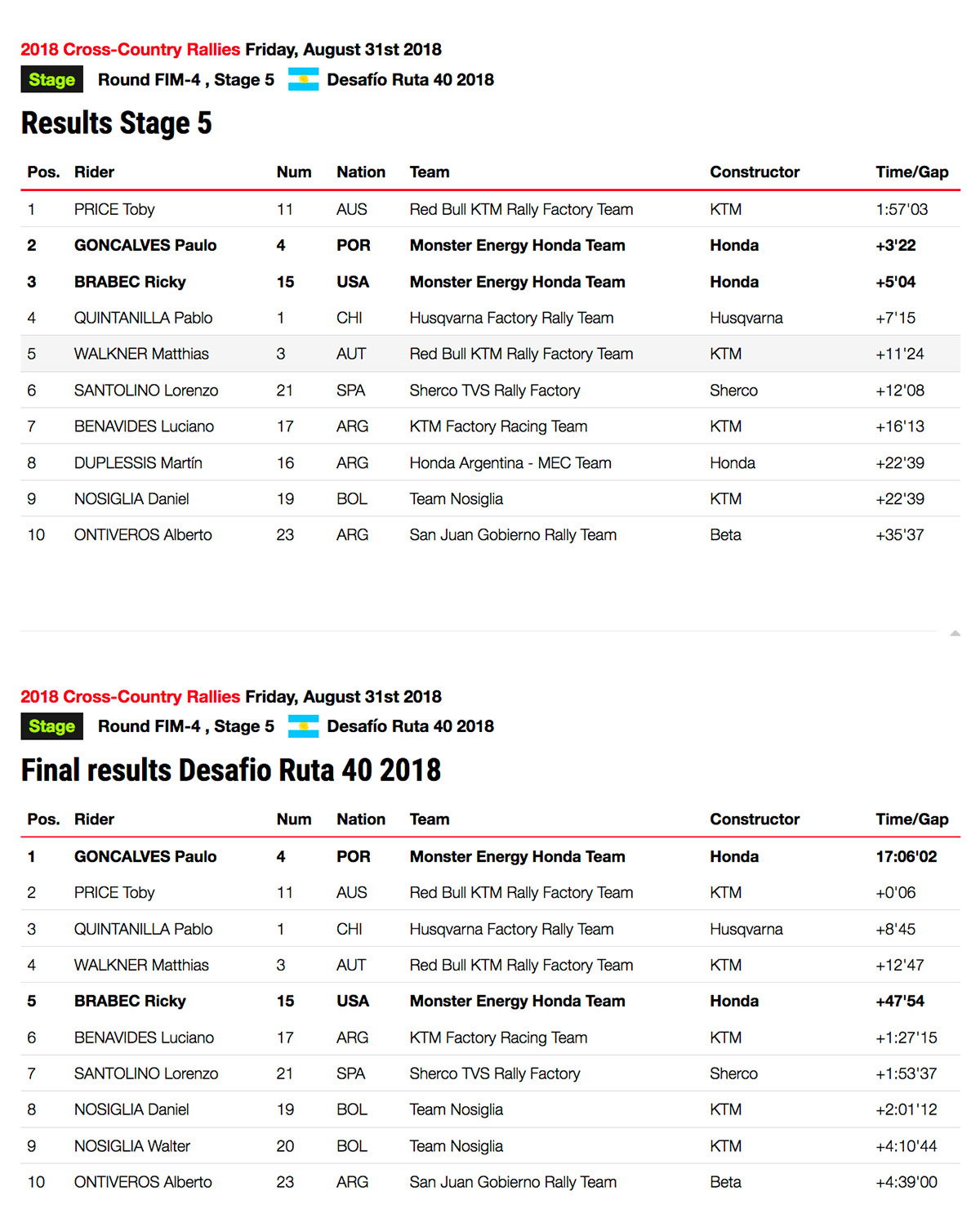