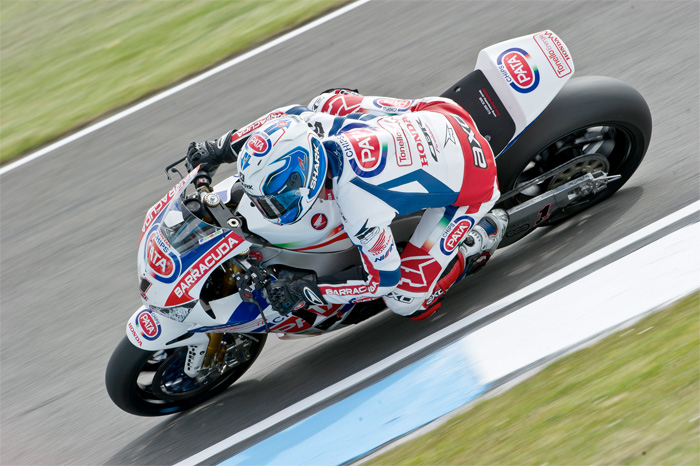 Sylvain Guintoli and Michael van der Mark are preparing for the Pata-sponsored eighth round of the 2015 World Superbike championship which takes place at Misano World Circuit this weekend (19-21 June) on the Adriatic coast of Italy.

Both Pata Honda riders enjoyed improved results in the last round at Portimao in Portugal but the CBR1000RR Fireblade SP-mounted duo knows that further steps are required to challenge for more podium finishes.

Reigning WSBK world champion Guintoli has never visited the podium at the 4.226km Misano circuit, which has recently been resurfaced to improve wet weather grip, but the 32-year-old French rider has declared himself ready for the challenge.

"I‰Ûªm still buzzing from the parade lap I did last week at the Isle of Man TT, except it wasn‰Ûªt a parade lap as we were doing almost 200kph down Bray Hill and I saw 270kph on the CBR‰Ûªs clocks over the mountain!" Guintoli said. "What a perfect bike for the job though, as John McGuinness showed in the Senior TT on Friday.

"But now it‰Ûªs time to focus back on our own CBR for Misano and continue the hard work that the team has been doing recently. We had a test after the Portimao round and tried a couple of new things that we think could improve our race pace some more.

"I really like Misano and it‰Ûªll be good to try the new surface there and chase more top five finishes and our first podium of the season."

World Superbike rookie van der Mark, 22, finished second at Misano last season on his way to the 2014 World Supersport championship and the Dutch ace is determined to add to his debut WSBK podiums scored earlier this season at his home round in Assen.

"I‰Ûªm really looking forward to riding at Misano this weekend because it‰Ûªs a track that I really enjoy and to ride it on the Fireblade should be great fun!" Van der Mark said. "After a bad run of results, it was really good to finish both races in the top ten at Portimao and that‰Ûªs definitely going to be my biggest target for Misano.

"Hopefully, we can have a weekend without any problems and get back to challenging some of the front guys again like earlier in the season."