Pagliani the race and Hanika the Cup in Misano 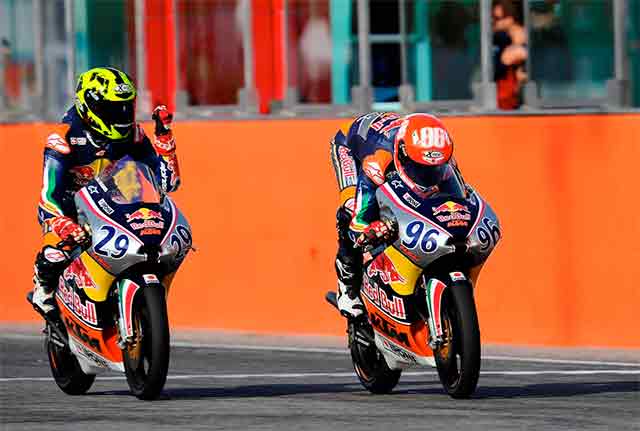 The 17-year-old has ridden superbly since the beginning of this, his first Cup season and had already been second three times. It looked to be going that way again as Manzi took the lead with just a few corners to go, only to run fractionally wide on the exit of the final turn allowing Pagliani victory.

Marcos Ramirez, the 15-year-old Spaniard, shadowed the pair of them to third but Karel Hanika fans were already celebrating the 17-year-old Czech's Cup victory even though he didn't finish. He suffered an engine problem while leading on lap 12 of 17. The only rider who had any chance of wresting the title from him going into the race was Jorge MartÌ_n but the 15-year-old Spaniard crossed the line ninth with handling problems and Hanika has an unassailable points lead even with the two race at Aragon to go.

Manzi had chased Ramirez and Pagliani onto the last lap and looked to be in the perfect slipstreaming position, especially being the smallest of them. Tucked away down the back straight he moved cleverly into the lead.